Thursday, October 31 2019: On General Hospital today, Valentin inquires with Ava about the portrait of Helena, Sam learns Cassandra is her cellmate, and Cam and Joss drink at the high school party. 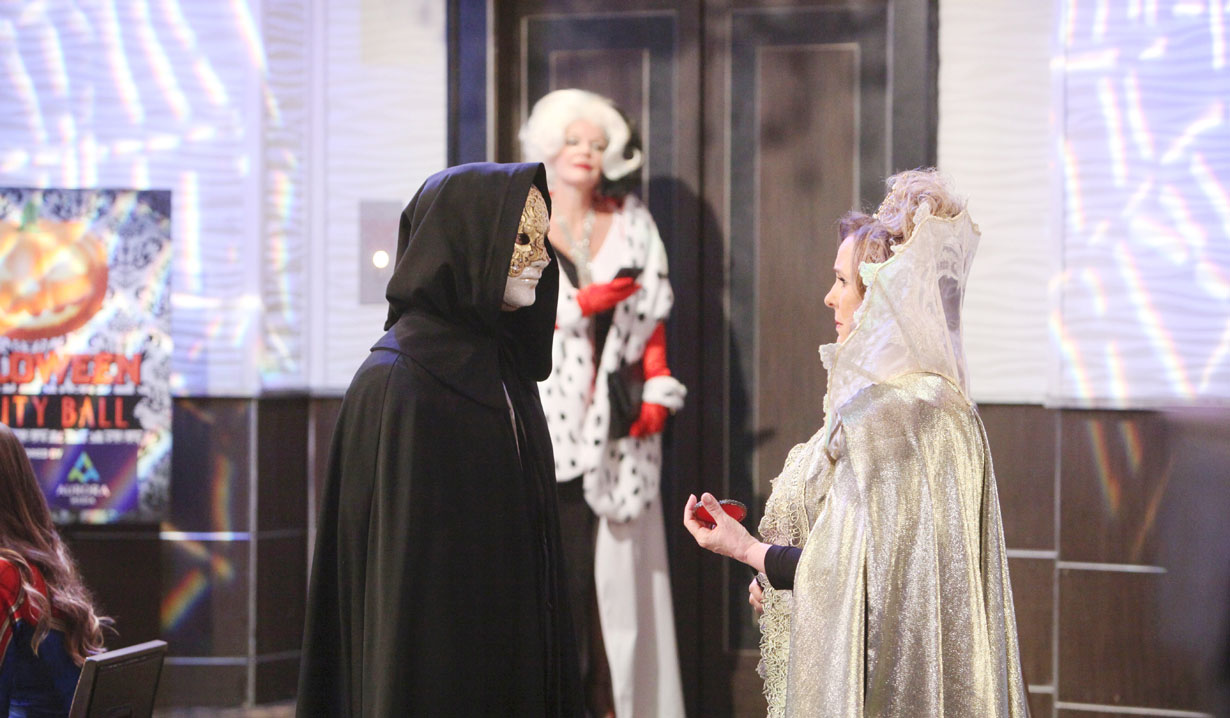 In a bathroom somewhere, a dark-haired man exits a shower and puts on a ring with the Cassadine crest and dresses in a masked costume. 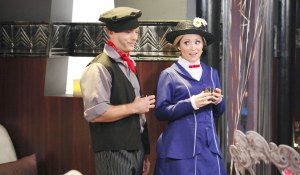 Joss, Cam, Trina and Dev arrive at Port Charles’ High Halloween dance on The Haunted Star. Lulu and Dustin, dressed as Mary Poppins and Jack from Mary Poppins Returns, are chaperoning. Cam reveals to Joss that he smuggled in some booze. They sneak off to sample the booze, while Trina plants a kiss on Dev. Dev reveals he likes Trina, but not in that way. Trina wonders if he is into someone else, and thinks it is Joss. Dev points out that she’s his cousin and besides he’s too busy for romance. 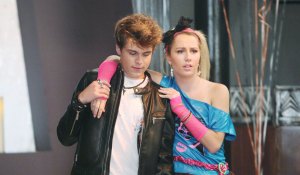 On deck, Joss and Cam get hammered. Later they return to the party and Trina learns Joss and Cam have been drinking. Trina decides to get a very drunk Joss out of the party, but Joss runs out to the balcony to be sick. They are caught by Dustin and Lulu. Meanwhile, a drunk Cam knocks the candy dish to the floor and Dev figures out he’s been drinking.

At General Hospital, Finn tells Alexis he’ll check back in with her when her bloodwork comes back and she should rest. Alexis asks Molly and TJ to get back to their party, and Neil arrives to stay with Alexis. By the nurses’ station, Hayden talks to Finn about their daughter. Finn wants to know where Violet will go when she’s discharged. Hayden plans to take her to Liz’s and wants her to be close to her father. Finn asks what part he’ll play in her life, and she tells him whatever part he wants to play. She tells him when he figures it out to let her know.

At the Metro Court, Jordan vents to Curtis that Molly and TJ are too young to marry. Curtis thinks she is projecting her own early marriage to Thomas and its issues onto the kids. He feels TJ is old enough to make his own decisions and points out Aunt Stella will put her two cents in about it for sure, so let her take the heat this time and don’t ruffle feathers with TJ. At the bar, Ava eavesdrops on Valentin, who tells Nina that something about Helena’s portrait must be important since Laura wants it. Valentin seeks Ava’s help and asks how much a Jay Garron portrait goes for. She says five figures unless it’s a puzzle piece because he’s known to have hidden secret messages in his works. Ava excuses herself and calls Trina to find out how her friend really got the painting of Helena and learns he picked it from a trash bin. 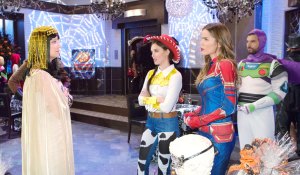 The mystery man appears in a dark cloak and a gold mask. He bumps into Laura, who apologizes. The man spots Ava getting on the elevator and goes to join her, but the doors close. He quickly exits. Chase and Willow arrive dressed as Buzz Lightyear and Bonnie From Toy Story. Meanwhile, Sasha tells Nina that she looks beautiful and is glad she is happy with Valentin. Nina lashes out at her and hopes she’ll soon be in prison unless Michael buys her freedom. Willow intervenes, and Nina rips into her. She asks what if someone came to her and told her that Wiley wasn’t her son and she was never a mother. Michael and Chase try and calm Nina down, and Michael asks Nina why she’s so convinced that Sasha came up with the lie on her own. Elsewhere, Molly and TJ arrive and Molly runs into Kendra, who is dressed as a mermaid. Molly tells her that Alexis is in the hospital, possibly with the flu.

In Pentonville, Sam discovers her new cellmate is Cassandra Pierce, who wants Sam to refer to her as boss. Cassandra learns who Sam is as Sam tells her not to mess with her. Cassandra wonders if that fiery spirit is the Cassadine in her, and notes she’s so uncultured and unrefined compared to the others. Cassandra flashes back to being saved from the clinic by the mysterious Cassadine. 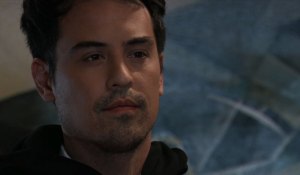 Ava heads to her gallery and looks at the portrait of Helena. She wonders why so many people are interested in it. Later the masked man sneaks in, and Ava surprises him at gunpoint. She demands he removes his mask. He does and reveals himself to be Nikolas Cassadine, (now played by Marcus Coloma).

Jax arrives at General Hospital to check on Hayden. He learns Violet is sick, and Finn knows about her. He fills her in on Laura’s theory about the codicil. When Hayden mentions Valentin throwing the painting away, Jax recalls Dev mentioning finding a portrait and selling it and wonders if he sold it to Ava. In Alexis’ room, the rash on her hands begins to cause her pain. Finn returns and examines her. He says whatever she has it isn’t the flu.

Jax informs Laura that Ava may have the portrait.

Cameron Sneaks Alcohol Into His Soda...

Ava Goes to Rehab After The Shock...