Friday October 25, 2019: On General Hospital today, Diane has a suggestion for Sam and Jason, Valentin is annoyed by Spencer again, and Maxie worries that Peter is doubting their future. 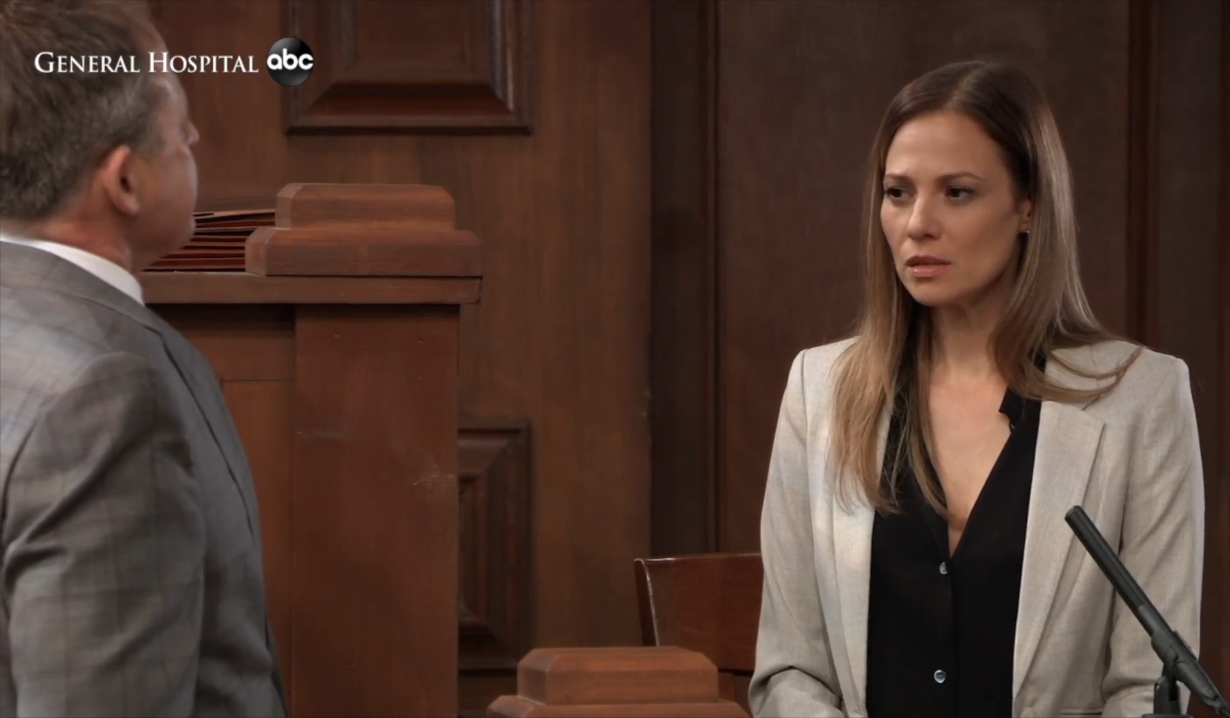 Valentin surprises Nina at Crimson and tries to tempt her away for shopping in Paris for art. She’s swamped and can’t go. Judy brings in a present left at the front desk. It’s an expensive bottle of champagne from Spencer, congratulating her on kicking Valentin to the curb. They decide to send it back. He gives her a kiss and takes off. She decides to keep the wine. 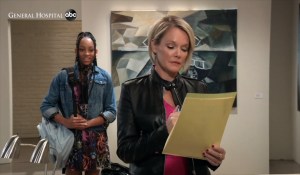 Ava shows Trina around her gallery. Trina finds the portrait of Helena creepy so they decide to put it in the backroom. Later, Ava stares and worries about feeling watched. Valentin startles her. He’s in the market for art and thinking of commissioning a family portrait. He tells her that Nina has already taken him back. This miffs her and she stomps off. He lets himself out. 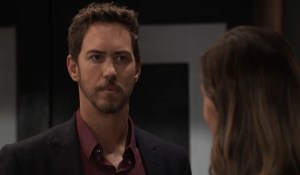 Back at the Crimson office, Peter is eager for updates on Franco’s hearing. Maxie is surprised he’s so concerned. He claims it’s because he runs a newspaper. Lucy strolls in and declares she will make his dreams come true. The condo he wanted by the docks is now available if he acts fast. Peter says he’s not ready yet. Ava storms past them into Nina’s office and demands her scotch back. She’s not wasting her peace offerings on someone who would take Valentin back. They bicker and Ava urges her to open her eyes to what a manipulator the Cassadine is. Nina accuses her of projecting. “I’m nobody’s fool,” Nina makes clear. Once Ava exits, Nina pulls out the wine and smiles. Meanwhile, Maxie sends Lucy away so she can talk to Peter about his change of mind. She thinks he’s getting cold feet about them living together. He admits he’s worried that something could upset their future. 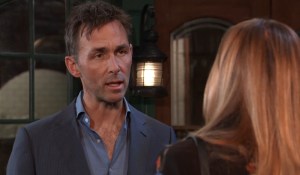 Kevin joins Laura at Kelly’s. She tells him the artist who painted Helena’s portrait is dead but she’s sure there is a clue in it. Laura thought he was supposed to be at the competency hearing. He’s the last witness and suggests she come along and give Liz some support. As they exit, Valentin corners her and asks if she’s aware of the hell that Spencer is trying to raise. Now that Spencer is a young adult, he may be forced to deal with him the way he deals with other threats. 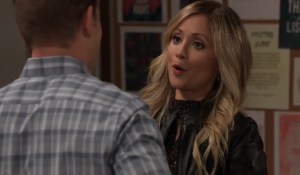 Lulu surprises Dustin at school. She’s brought them cider and food. They discuss the wedding disaster and he worries about how confused Charlotte must be. As she rambles about her “pathological need to right all wrongs,” he’s happy that it sounds like she thinks he’ll be around to get used to this. He invites her to help him chaperone the Halloween dance. 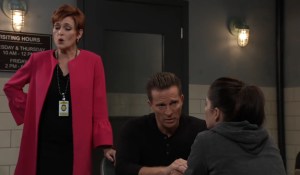 Diane and Jason visit Sam in Pentonville. The lawyer admits that the case is weak now that Bryce is dead and they can beat it in court. There is another option that can speed up Sam’s release. She suggests they skip a jury trial and just go with a judge. Sam asks for a moment alone with Jason to discuss this. He’s not comfortable placing her future in one person’s hands. However, he’ll support whatever choice she makes. She just wants this finished fast. When Diane returns, Sam agrees to a trial by judge. 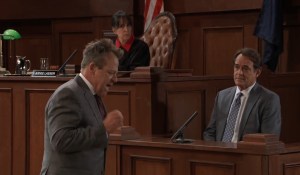 In the courthouse, Scott asks Kim if she drugged the original Drew so she could conceive his child against his will. She admits it, but someone stopped her. Kim explains she was grieving and confused. Scott suggests she still is and wants a child with a dead man. Martin objects and a recess is called. Kim leaps off the stand and cries on “Drew’s” shoulder. He goes up on the stand next and answers questions about his military history. He says that Kim drugged the other Drew but has always been kind to him. Martin says his awareness of space and time proves that he’s of sound mind. Liz suddenly realizes something about July 2010. Soon, Scott returns to questioning “Drew.” The lawyer gets him to state he was in Turkey in 2010 and then reads a newspaper article showing that Franco was actually involved with a very public murderous art installation at the time. Scott shows him a photo, but “Drew” insists it wasn’t him, it was Franco. The lawyer claims this proves he’s not sound. Kevin is called to the stand next. Scott is startled when Kevin tells the court that Franco is in control of his faculties. He may legally be Franco, but he is conscious of his own choices as “Drew”. Martin gets Kevin to confirm he does not support Liz acting as Franco’s proxy. The judge goes off to ponder and soon returns with her decision.

Lucas and Brad have another therapy session. 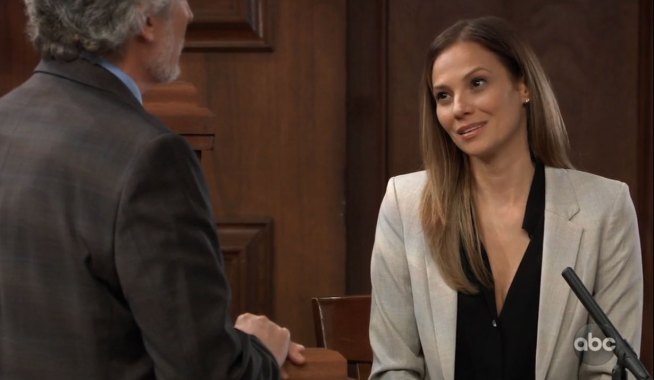 Scott Reveals Kim Drugged Drew to Get Pregnant With Another Child

“Drew” Wins His Case and Is Set Free, Leaving Liz and Cam Devastated 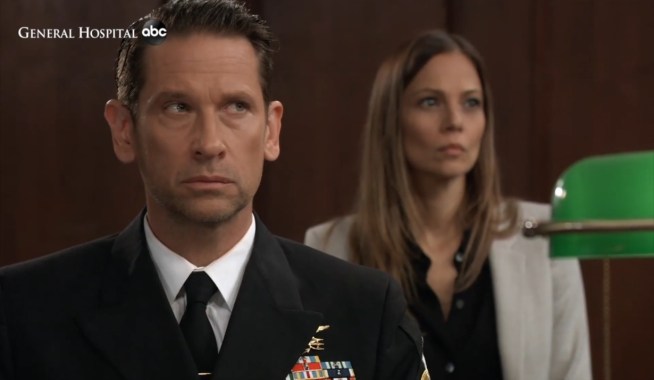