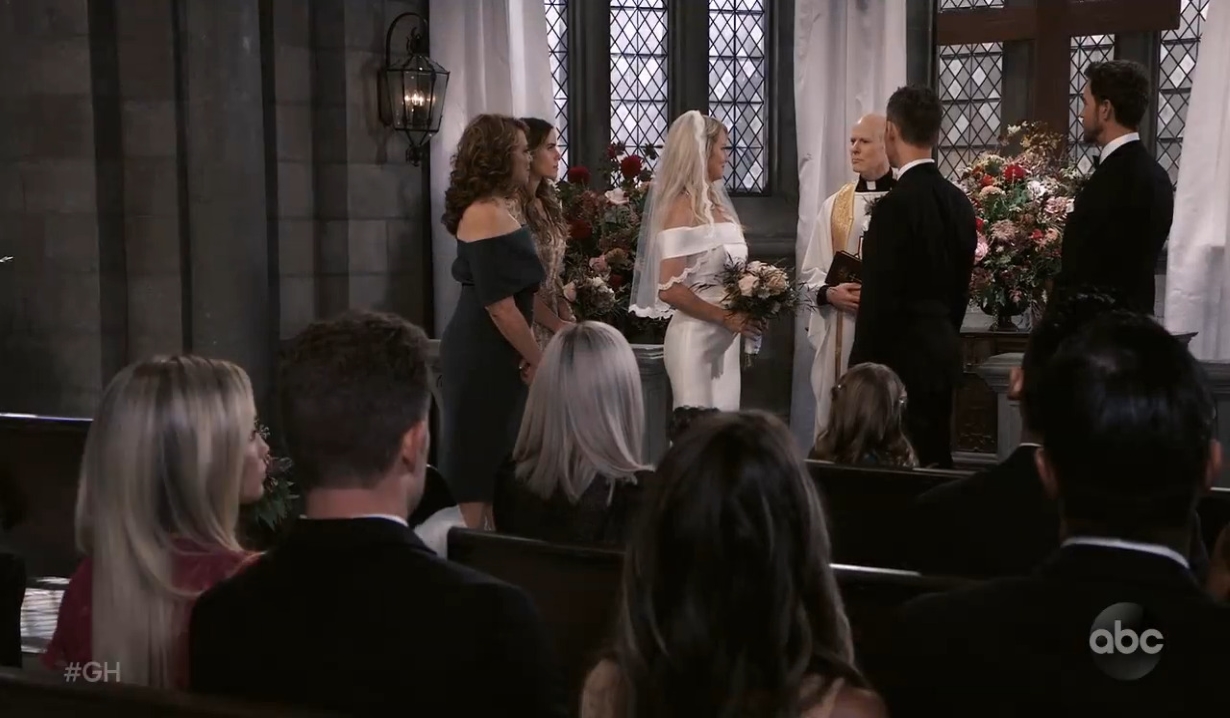 Lulu stands at the chapel entrance making faces as Liesl takes a photo of Nina and Sasha. Before they can go in, Lulu stops Nina to talk. This only raises the bride’s ire. Michael arrives and escorts Sasha inside. Maxie comes out to say the groom is getting antsy. 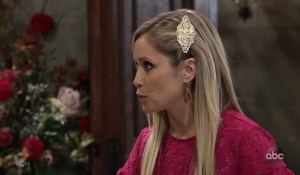 Lulu claims that what she needs to tell Nina can’t wait. Sasha starts getting fidgety. Maxie drags her friend away and tells her not to do this. Lulu squints. Charlotte runs out to say the music has started. This is enough to keep Lulu’s mouth shut. She bustles into the chapel and takes a seat. Charlotte comes down the aisle dropping flowers and the bride follows after. To start the ceremony, Obrecht gives her blessing to Nina and the union. Nina tells Valentin that she was broken before they met but he healed her. She’s realized that she can’t love him any more than she does and will love him forever. He holds back his tears and tells her that she will always be the love of his life. He doesn’t want them to ever be apart and thanks her for believing in him when she shouldn’t have. When the clergyman asks if anyone objects, Lulu steps up and everyone cringes. Lulu insists this is important and Nina needs to know the truth. Charlotte is taken out and Nina nearly clobbers Lulu, who blurts out that Sasha’s not really her daughter. She says that she heard it from Sasha and Liesl. When Nina asks Sasha to confirm she’s her daughter, she starts to shake. 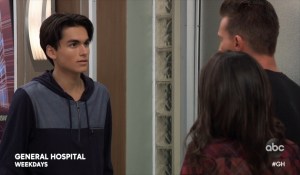 At General Hospital, Dev tells Sam and Jason about seeing Peter looking dodgy and carrying a gym bag. He explains that Mr. August seemed concerned about Shiloh when he talked to him. After he takes off, Sam surmises that Peter and Shiloh were working together. In her room, Carly is eager to get out of bed and see her daughter, but Sonny says she needs to rest. They assure each other that their daughter will have a normal life. Carly has a nap. She wakes up after having a dream her baby was crying and sends Bobbie off to check. After seeing the baby burp, Bobbie returns and tells her daughter. Carly is relieved. Her mom wishes she’d told her what she’s been dealing with. Carly didn’t want to burden her with it when she was dealing with diabetes. She worries that she won’t be enough for Donna. Bobbie assures her that there is no more committed a mother than her. She gives her daughter BJ’s music box for Donna. Carly is moved. 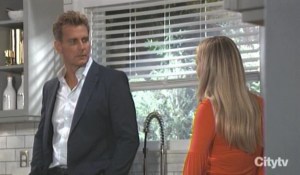 At the Corinthos compound, Joss tells Jax the truth about Dev. She insists Sonny just wants to help him and so does she. Joss explains that no one pressured her into helping. Jax thinks this situation is untenable and needs to be fixed. His daughter doesn’t want Dev sent away. He explains that he has a different perspective on this than Sonny and it might have to be addressed differently than they wish. Sonny arrives and Joss exits. Jax immediately leans into him, accusing him of not changing at all. He’s determined to protect his daughter from whoever Dev is running from. Jax couldn’t live with her getting caught in the crossfire and wants him out of the house. He doesn’t want to drag Joss out of the house and put Carly in any stress right now. He’s annoyed that Sonny doesn’t seem to care about that. Jax strides out, leaving Sonny wondering what he will do.

Sam and Jason drop by Spinelli’s room at the Metro Court. They tell him about Carly’s baby and their suspicion that there is a connection between Shiloh and Peter. Spinelli mentions overhearing Peter on the phone before Shiloh transferred. The Jackal gets a confirmation that Peter called a burner phone. They start digging through financial records. Spinelli hacks into Peter’s bank account and they find he withdrew money and guess it was for Shiloh. They hope this is true, even if it will break Maxie’s heart. Jason says they need to keep quiet until they get more proof.

Dev meets Joss at Perks. She tells him that her dad knows the truth about him thanks to her. He understands why she told her dad the truth. Joss tries to reassure him but warns that her dad is worried and that means he’ll do something. He’s impressed that she has such a good relationship with her dad. She points out he has the same relationship with Sonny.

Dustin looks out for Lulu. 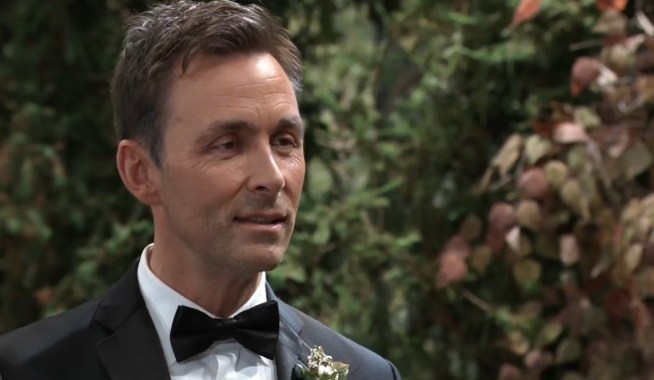 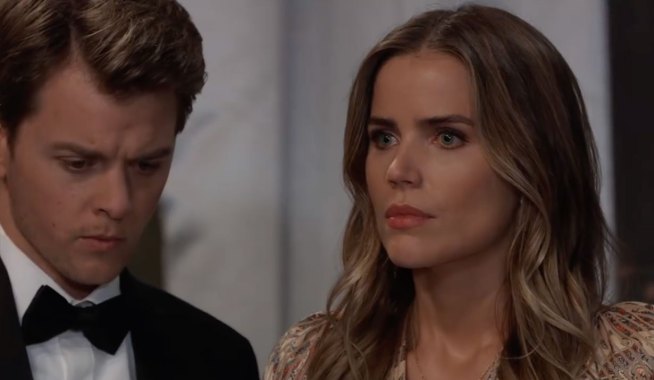