Wednesday, October 2, 2019: On General Hospital today, Lulu overhears a secret, Kevin helps Laura at Wyndemere, Maxie asks Peter a big question, and everyone ends up at the Floating Rib. 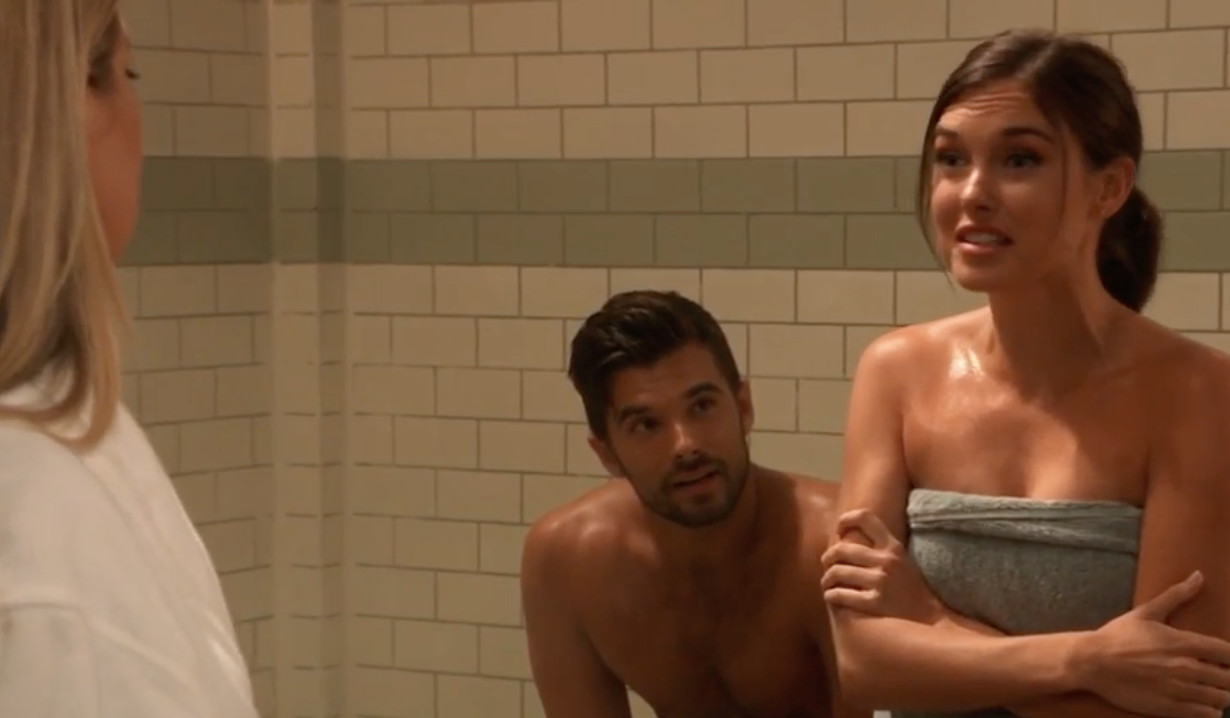 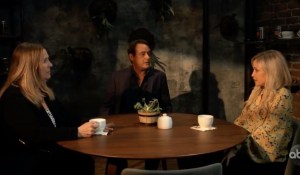 Kevin joins Laura and Lulu at the coffee shop. Laura tells them they’ll be babysitting at Wyndemere because Charlotte wants to wake up at home on the day of the wedding. Lulu leaves for the bachelorette party and Kevin asks for the real reason they are going to Wyndemere. Laura mentions Spencer and says she’ll explain on the way over. Kevin assures her he has her back. 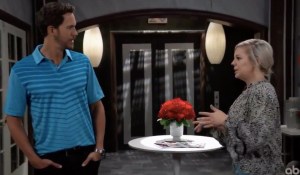 Peter meets Maxie at Crimson as she makes final preparations for the bachelorette party. She brings up his apartment search and nervously asks if they should be looking for a place together. When he hesitates, she assumes it’s because he doesn’t think he deserves it. She reminds him he’s a hero and sends him to the bachelor party.

At Wyndemere, Nina and Valentin get flirty as they reluctantly prepare for their respective wedding parties. Liesl follows as Charlotte runs out wearing Nina’s half heart necklace. Nina notes the other half of the heart belongs to her daughter, as 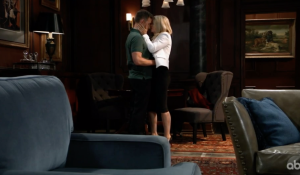 Sasha enters. Nina declares how lucky she is to have everyone there in her life. Charlotte asks if Sasha has the other half of the necklace. As Sasha stammers, Nina interjects to explain why Sasha never got it. Laura and Kevin show up. After the adults leave for their parties, Charlotte wants to play a game. Laura suggests hide and seek, as Kevin gives her a knowing look. Charlotte says her favorite room is the trophy room and that it’s better now that her Papa moved the portrait of Helena out of there. She shows them the portrait that scares her. Laura sends her upstairs to work on her homework, as she and Kevin talk about Helena. Laura knows Spencer is involved and wonders how he even knows about the codicil, wherever it is. Kevin tells her the faster she gets done with Charlotte’s homework, the faster she can snoop. Later, Kevin eyes the portrait as Laura returns. He thinks he found something. 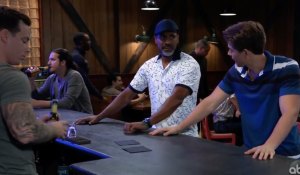 Michael, Curtis, and Finn meet at the Floating Rib in golf shirts for Valentin’s bachelor party. They comment on why they’re all there since they all hate the groom – Curtis for Nina, Finn for Anna (since Peter is throwing the party), and Michael for Sasha. Michael brings up his new baby sister and they toast to Donna Corinthos. At a nearby table, Chase notes to Willow how strange it is that his brother looks like he’s going golfing. However, he just wants to focus on her. Chase has a surprise for her and leads her out. 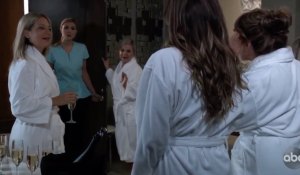 The women lounge at a spa, which thrills Nina. Unfortunately, the appointments were double booked and they have to wait an hour. Maxie spirals out because they have dinner reservations directly afterward. Maxie says they’ll just enjoy their free drinks and the steam room. But that too is booked by a couple who is already in there. Nina says she’ll take care of it and busts in on Chase and Willow who are getting romantic. Nina and Willow argue over who has priority. Maxie enters to lead Nina out so they aren’t late for their dinner reservation. Alone again, Chase and Willow kiss and drop their towels.

More: Watch as Lulu learns the truth about Sasha

Peter arrives at the Floating Rib followed shortly after by Valentin, who thanks the men for being there, despite them not wanting to be. They head out for the links but quickly return due to a storm. As they wait for their drinks, Valentin asks Michael about Sasha. Michael tells him it’s none of his business, but makes cryptic comments about honesty and how they both will do anything to protect the people they love. After they hit another snag, the women end up at the Rib. Nina fills Valentin in on her encounter with Willow and asks for a drink. Across the room, Sasha and Michael talk about keeping her secret. Michael warns her to watch out for Valentin because he knows Michael knows. Liesl sits with Finn to needle him about Hayden and Anna. He says no favor to Peter is worth a conversation with her and steps away. Upset watching how happy Nina is with Valentin, Sasha runs to the bathroom. Maxie notes to Peter that despite everything, everyone is having a good time and they did a good job. Liesl follows Sasha as Nina urges Valentin to participate in Karaoke. Nina looks adoringly at her husband as he sings to her. In the bathroom, Liesl orders a crying Sasha to pull it together. She reminds her that Nina must never find out she isn’t her daughter. Shocked, Lulu overhears while in a stall.

Lulu can’t believe what she heard.

Jax hopes the wedding will serve as a new beginning.

Kim's Teetering on a Breakdown...

Jax Confronts Hayden for Not Telling...