Valentin Seeks Out Finn in Order to Locate Anna Regarding Cassandra 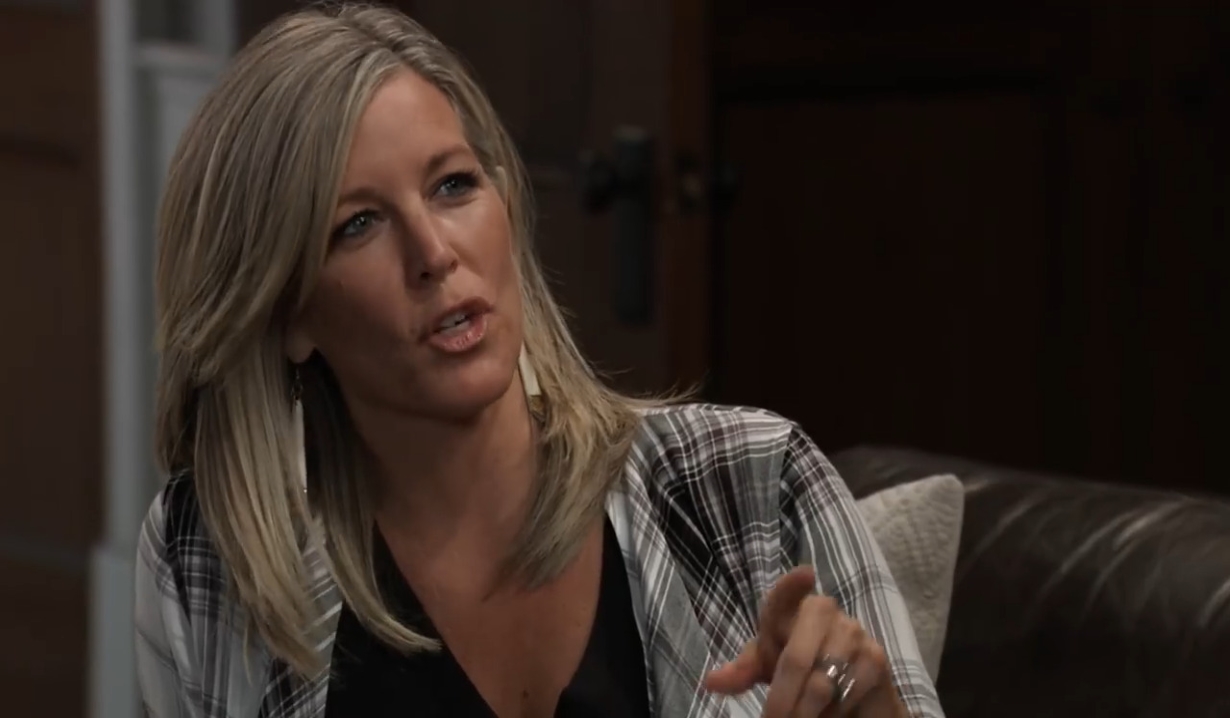 At the Corinthos compound, Sonny and Carly talk about what happened with Olivia. He explains how bad things are with Dante. Sonny worries about Rocco and then the topic changes to Dev. Carly concedes that he is getting along okay. She’s sure that even Joss is getting used to his cocky charm.

Lulu is at home crying on the couch when Peter and Maxie drop by. Lulu shuts the door on them and covers her head with a pillow, but Maxie won’t go away. Lulu opens the door again and hands them the divorce papers. She doesn’t know how to tell Rocco. Maxie suggests she come out drinking. They argue about this and Maxie volunteers Peter to babysit. Once the ladies leave, Rocco plays games until he wants a book read to him. As Peter reads, he’s not sure he should be reading something this morbid. He changes the ending to a happy one. That annoys Rocco, who already knows the story and wanted to prove he’s brave. He runs off to hide in the kitchen. Peter finds him and assures him it’s okay to get scared. Rocco tells him he’s mad about his father leaving him. Peter explains that his mother left him. Parents make mistakes. 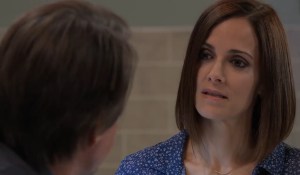 Hayden runs into Finn at the hospital. They talk about all the secrets they’ve kept from each other until he’s interrupted by a text from Anna. Hayden turns around and bumps into Lucy. She claims she wants to put down some roots and is interested in buying the house she almost bought with Finn. Lucy immediately tells Finn this and Hayden declares she will find another realtor. Lucy backtracks and hands her a business card before walking off. 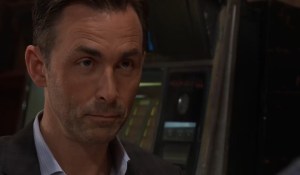 Curtis joins Valentin in a booth at The Floating Rib to chat about Jax’s files on him and Cassandra. The Cassadine claims he knows nothing about Cassandra but spots something interesting in the file. After he takes off, Hayden joins Curtis and she apologizes for missing his wedding. He’s more interested in what she’s been up to while she was away. She explains she moved around a lot and then met Jax. 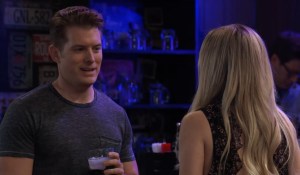 They talk about Finn moving on, but she doesn’t want to discuss the past. Maxie and Lulu arrive. While Maxie gets them drinks, Lulu tries to run but bumps into Dustin (played by Mark Lawson), spilling his drink on him. Maxie interrupts and asks him to join them. They chat and he senses he’s intruding. Lulu insists he’s not and brings up the divorce. While Maxie pays the tab, Dustin tells Lulu her husband is a fool to let her go. She agrees. After he leaves, she cries. 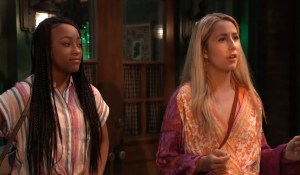 Dev and Joss are outside Kelly’s, bickering about his driving and car theft. Cam and Trina arrive as Joss complains about Dev getting the boat towed. As Joss and Cam go in for coffee, Trina starts quizzing Dev. Michael and Sasha are inside, joking about how they barely leave bed. He explains they have to take a raincheck on their Puerto Rico trip. He invites her to Wiley’s christening. Michael bumps into Joss and Cam by the bar and they catch up. When left alone, Joss and Cam talk about how much they miss Oscar. She appreciates everything Cam has done to help her move on. They hug and then go back outside to join their friends. Cam’s boss walks by and calls him back to work. Joss is distracted by thoughts of Oscar and holds the compass he left her. 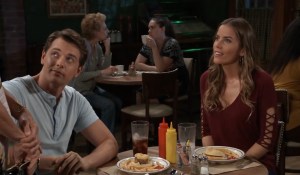 She tells them about trying to move on by focusing on the good times. She decides to go somewhere alone. This concerns Dev. Back inside, Sasha notices that Lucy has been staring at them. Coe comes over and says that in another life Sasha could have been the face of Deception, the cosmetics company that she launched decades ago. Lucy thinks she should model and hands her a card before exiting. Michael thinks she should go for it. Sasha admits she did some modeling in the past and then changes the topic.

Cameron and his boss go up to the footbridge to clean it up. He has to cut off all the locks, including Joss and Oscar’s. She later arrives and is shocked to see it’s gone. As Joss sits and sobs, Dev finds her and she tells him about the lock being gone. He hugs her.

Valentin drops by the hospital to see Finn. He needs to talk to Anna about Cassandra immediately. After the Cassadine walks off, Finn makes a call.

Maxie takes Lulu home and they find Peter and Rocco sleeping on the couch.