Monday July 15, 2019: On General Hospital today, Carly and Jason worry about Dev, Julian is concerned about Ava, and Hayden catches up with Laura. 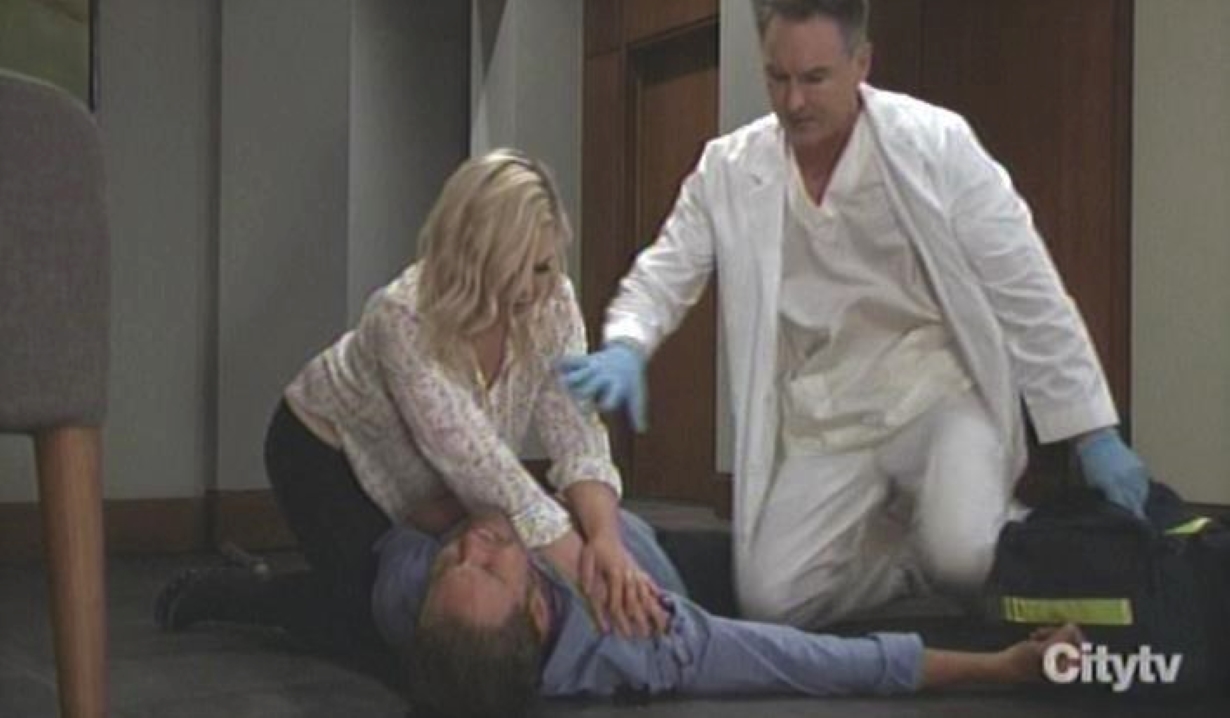 At the WSB in Ithaca, Maxie and Peter burst in on Dante only for Peter to get shot in the shoulder. A paramedic hurries over and some agents secure Dante. The medic says that the bullet went straight through. Maxie insists that he be taken to Port Charles for treatment. 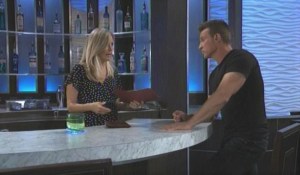 Dev strolls into the Metro Court and spots Laura’s purse on a table. He knocks it on the floor and is about to pick it up when Jason catches him reaching for the wallet. Carly interrupts and says that Dev will be working in the kitchen. After the teen wanders off, Jason asks Carly what she thinks of him. She says he’s basically good and he’s important to Sonny. Jason’s not sure that Dev can survive being undercover for years and worries he’ll be caught doing something stupid. Dev returns after Carly exits and tells Jason the purse was on the floor and he was only picking it up. Jason knows that’s a lie. He points out that robbing Laura would have been a bad choice, especially since he doesn’t need the money. Dev doesn’t want to squander the chance Sonny is giving him. Across the room, Hayden sits with Laura and they chat about Spencer, his changing voice, and the shadow Valentin has thrown over his life. Hayden tells her about being the CFO of Aurora. They talk about people making mistakes and how Nikolas could have come back to the good side if he’d had the chance. Ava interrupts to say what a lasting impression he made on her. They get up to leave and Laura says he is always in her heart. 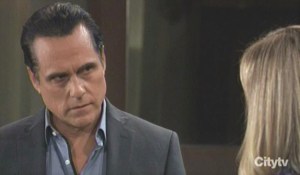 Lulu visits Sonny at his office and begs him to bring his son home again. She complains about everything he’s missing and how it’s destabilizing her life. Sonny is concerned when she tells him about all the torture scars Dante has. Lulu claims she is broken without him. After she leaves, Carly shows up and worries about Dev being in over his head. He knows but he still owes him. 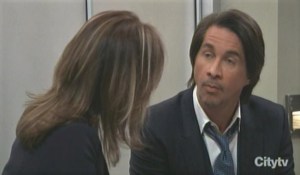 Finn runs into Alexis at General Hospital. They discuss therapy and she offers to listen to him talk about Hayden. He says they almost made things work and now he must face the failure. She explains she gets that feeling around all her exes too. He’s moved on but the woman he moved on with has disappeared. The lawyer advises him to just focus on the facts, not his fantasies about what might be. She then rambles about digging into people’s personal lives and being fired by her own therapist. Peter arrives with Maxie and is wheeled into an operating theatre. Finn finds Maxie looking at the blood on her hands. She tells him that Peter getting shot was her fault. He could have died and Dante would be a murderer. “What is wrong with me?” she wonders. They sit down and he tells her how rough dating someone in the WSB is. He guesses she had good intentions and says Peter is responsible for going with her. A doctor comes out and explains there was no need for surgery. They have closed the wound. Maxie and Finn go to see the patient. She apologizes and Peter insists he’s fine. He’s glad he got shot instead of her. Later, Lulu arrives at the hospital and Maxie tells her that Dante shot Peter. 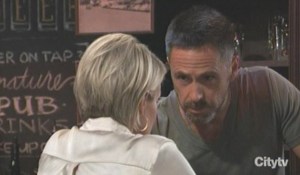 At Charlie’s, Ava and Julian chat about her Crimson interview. He admires how well she is doing. When he steps away, she gets a call from Sibley. Kristina eavesdrops. When Ava gets off the line, Kristina asks about the psychic. Julian doesn’t like the sound of this and assumes it’s about Kiki. He worries. Ava chokes up about her murdered child and her inability to rebuild their relationship. She needs to resolve things. Her brother doesn’t think Sibley can do that for her. She insists that she’s felt her daughter’s spirit. Kristina thinks Sibley is the real deal, but Julian thinks it’s a scam. Ava tells him to stay out of this and heads for the door, bumping into Alexis on the way. They chat about her Crimson story and then Ava exits. Alexis surprises her daughter with a hug. When she sits at the bar, Julian serves her coffee and apologizes for being harsh with her. She offers a truce and they discuss his sister’s grief. He’s afraid she’s headed for trouble. Alexis brings her daughter over and announces that Harmony has turned on Shiloh and he’s been arrested.

Kim and Julian have a serious talk.

Curtis and Drew catch up.

Mac Arrests Shiloh, Who Is Stunned...

Ava Gets a Message From Kiki From...