Sam and Jason Find Kristina’s Pledge, As Well As Margaux’s

Tuesday May 28, 2019: On General Hospital today, Scott and Julian try and convince Ava to change her plan, Kim and Drew leave for their trip, and Jordan waits for news about Ryan. 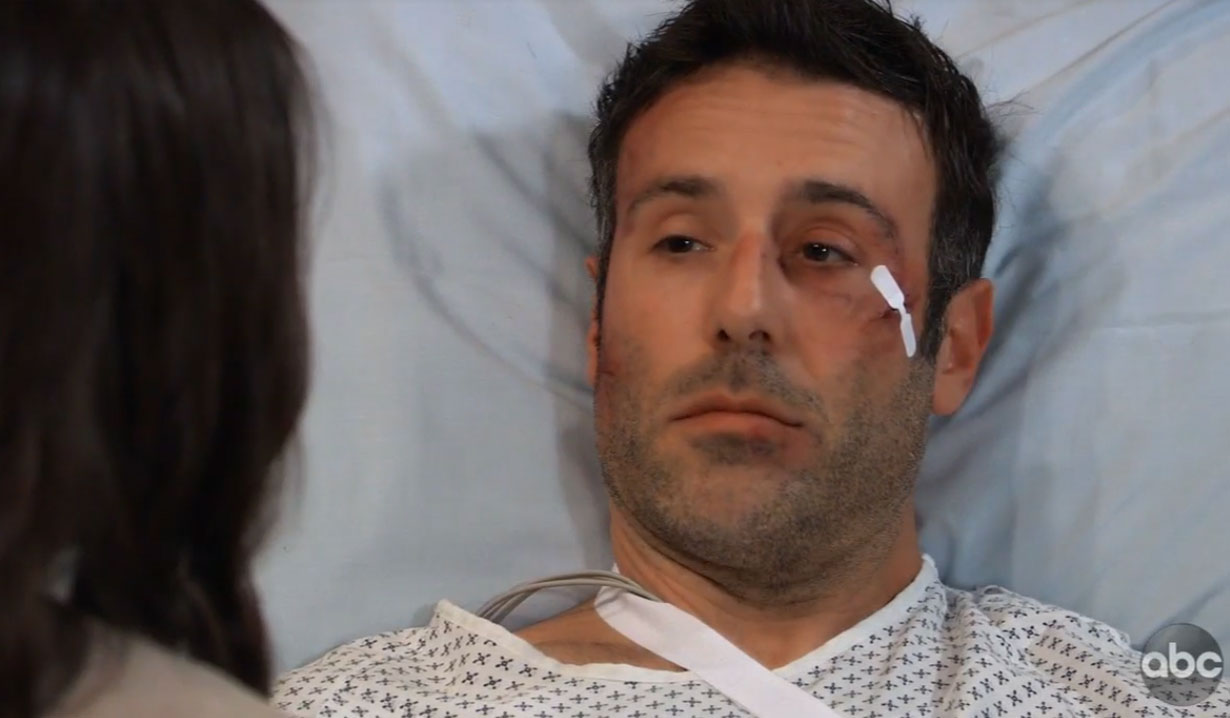 Scott arrives at the police station and finds Ava in the interrogation room. 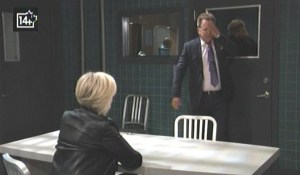 He offers her his services. She asks for confirmation that she’s killed Ryan. He doesn’t know. She says she stuck a knife in Ryan’s back and wishes she’d twisted it. He advises her not to say that in the courtroom and barks that she needs to plead not guilty. The lawyer thinks she can plead temporary insanity, but she refuses. Scott refuses to give up on her. 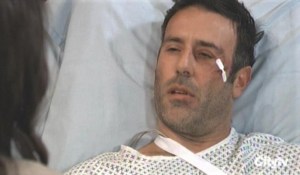 At the hospital, Sam tells Jason that a huge weight has been lifted since she got away from Shiloh. She enters Shiloh’s room as he wakes up. He says that Jason can’t keep them apart and he’s relieved that she’s still listening to her inner voice. Sam snaps, making it clear how much she despises him. Down the hall, Drew finds Monica and tells her he’s leaving town for a while with Kim to spread Oscar’s ashes. 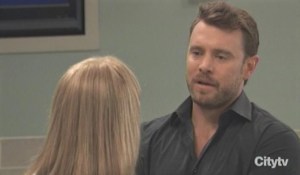 He wanted her blessing since the Quartermaines are usually buried in the crypt. She gives her blessing and offers to put a plaque in the crypt. They spot Jason and wave him over. Drew suggests that Jason order the supplies for Oscar’s treehouse. After he walks off, Jason asks Monica to expedite Sam’s toxicology report, so he’ll have proof against Shiloh. In a few minutes, he’s got it and joins Sam and Shiloh with the results that prove she was drugged. They tell Shiloh he’s going to prison for a long time. Sam suggests that Sonny will deal with him eventually. Jason demands Kristina’s pledge, or they will go to the cops. Shiloh agrees to cooperate and tells them where the pledges are. Meanwhile, Curtis is with Jordan in her room. She wakes up and he tells her how beautiful she is. She’s more concerned about Ryan. Reluctantly, he explains that Ava stabbed him and he’s still in surgery. The cop would want to do the same thing. Curtis says they need him to live. He explains that she had a heart attack last night. Jordan needs a transplant immediately and she guesses Ryan is a match. Her husband vows to make sure she gets a chance to live. When Monica arrives, she orders Jordan to take a break from work. After the doctor leaves, Curtis promises to pamper his wife and wants to plan their honeymoon. Monica returns and says Ryan is out of surgery but it’s too soon to tell if he’ll survive.

Julian helps Kim pack at her place for her trip to Kilimanjaro. He calls Alexis and thanks her for expediting her paperwork for Oscar’s ashes… and for getting him out of jail. Kim overhears this last part and makes him explain. Scott calls and tells him that Ava has been arrested. Kim wants to go to the station with him, but Julian insists she leave for her trip. 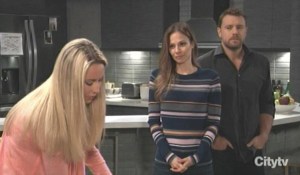 He promises to wait for her and gives her a kiss. After he’s gone, Joss drops in and they talk about singing Oscar’s song at the Nurses’ Ball. Kim wants her to have Oscar’s guitar. Drew arrives to pick up Kim. He tells Joss that they are taking the trip he never managed with Oscar. That sounds right to Joss. She’s sure it would make him happy. After some sobs and hugs she leaves. Kim and Drew talk about giving each other support and leave to catch their flight. 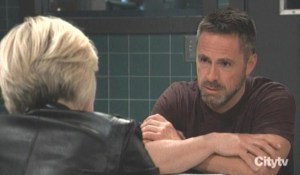 Julian joins Scott at the PCPD. The lawyer tells him Ava is pleading guilty. He asks him to try and talk Ava around. Julian goes into the interrogation room and his sister tells him how proud she is of avenging her daughter. Julian says that if she goes down for this, Ryan wins. She repeats that the whole thing was premeditated. He advises her to keep her mouth shut so he and Scott can get her out of this. If she wants revenge, she needs to stay out of prison, especially if Ryan survives. Scott joins them and says the arraignment will be this afternoon. Ava agrees to plead not guilty. 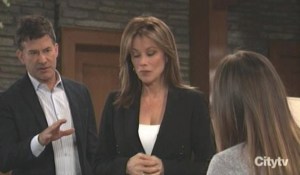 Neil drops in on Alexis at her place for an update on the plot against Shiloh. She fills him in about Sam being drugged. They discuss the situation with Kristina, who strolls in, worried about her sister. Kristina is even more worried about the pledge. After she admits she told Shiloh something about the family, Neil excuses himself. Alexis assures her daughter that Sonny can take care of Shiloh. “It’s not about him,” Kristina explains. The lawyer guesses it must be about her.

Sam and Jason arrive at the room where she was attacked by Shiloh. Jason finds the pledges. They open Margaux’s and then Kristina’s.

Shiloh pits people against each other.