Monday April 1, 2019: On General Hospital today, Sonny and Carly learn that Dante is gone, Maxie reveals the contents on Sasha’s DNA test, and Valentin has to cover his tracks, and Soaps.com wishes General Hospital a happy 56th anniversary! 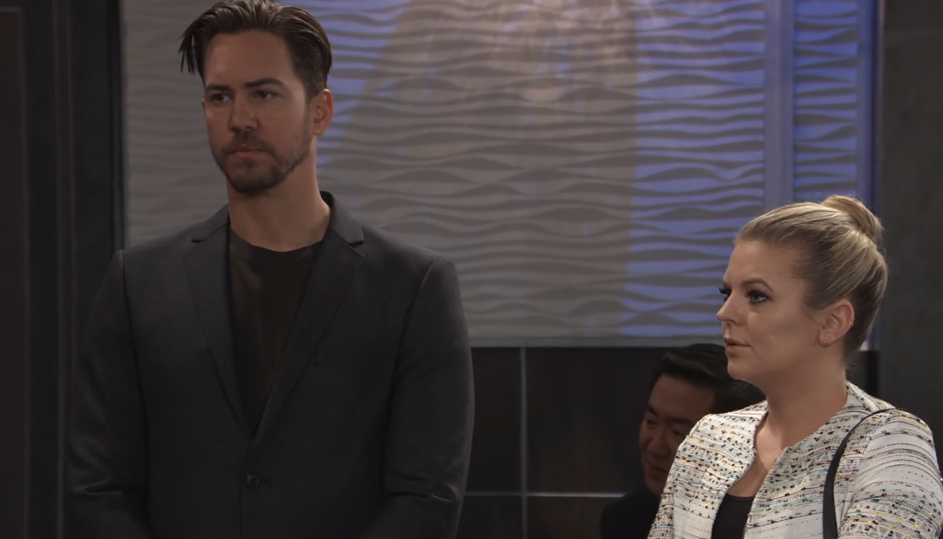 At the Metro Court, Maxie and Peter present Sasha’s DNA results to Nina. Valentin and Sasha hold their breath. Maxie explains the test confirms Sasha is Nina’s daughter. All of this is making Valentin livid. Nina demands an apology from Maxie. Peter explains they suspected Valentin of bad-play because Obrecht has something on him. The Cassadine insists that he only intervened on Liesl’s behalf to protect her family. Peter admits it. Increasingly upset, Nina can’t understand why Maxie felt so compelled to question whether she’s really Sasha’s mother. After Nina walks off, Sasha asks Valentin why the test confirmed she was Nina’s daughter. He fobs that off. Maxie tells Peter that she can understand why Nina is angry with her and thanks him for helping her. He asks if their association is over now. She awkwardly says it is and jumps on the elevator. Peter heads to the bar and apologizes to Sasha. She’s just glad to see someone was looking out for Nina. 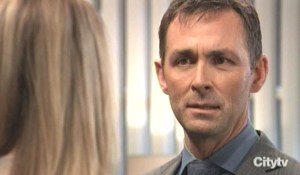 Valentin goes to see Nina in the Crimson office. She asks him what Obrecht is holding over him. He claims that Liesl knows she killed Cassandra. She’s appalled that Obrecht is using that after all the secrets she kept for her. Nina wants to confront her, but he says they should let sleeping dogs lie. She doesn’t like that he did this, but it makes her love him even more. 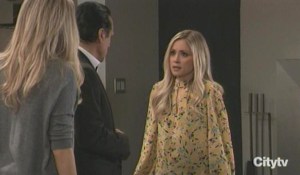 Sonny and Carly show up at Lulu’s to see Dante. She informs them that he’s gone. Upset, she explains that he’s off trying to fix himself and asks Sonny if he noticed anything while they were in Turkey. Sonny says his son was having a hard time adjusting. Lulu feels stupid for thinking that things would go back to normal. Rocco interrupts and asks if everything is okay. His mom reassures him and his grandpa takes him off to play video games. Carly and Lulu go into the kitchen and discuss how Ryan manipulated Laura. Carly assures her that Dante will be back. Meanwhile, Rocco and Sonny talk about Dante’s departure. Sonny explains he did it to keep him safe and encourages him to take care of Lulu while Dante is gone. After Sonny and Carly leave, Rocco asks his mom to tuck him in. When he runs off to bed, she sits on the floor and cries. Maxie soon bustles in and Lulu falls into her arms, crying.

Sonny and Carly got the Metro Court. She tells him that Dante reacted to a waiter dropping a tray like he had PTSD. Sonny’s not surprised. She’s sure that Dante is too much like his dad not to find his way back home. 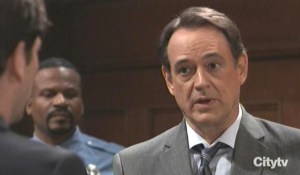 Kevin is brought into the court house. He tells Franco and Liz that he regrets what Ryan did to him. Franco thinks the shrink should regret what he did to him. “You should never try to help anyone again!” Franco says, storming off. Liz follows. Kevin feels alone. Lucy pops up. He’s surprised she doesn’t hate him too. She admits this hasn’t been his finest moment, but he probably had good intentions and she won’t turn her back on him. He explains that he had to bring in counsel from out of state. Nora Buchanan (played by Hillary B. Smith) strolls in and they make introductions. Lucy recognizes her as the women who defended Olivia Jerome. Nora is confident that Kevin had no criminal intent. Margaux arrives and introduces herself before crossing the room. Nora is startled when Kevin informs her he is pleading guilty. Lucy protests but Kevin insists he needs to take responsibility. Nora says he only needs to take responsibility for his actions, not his brother’s. The court is called to order as the judge arrives. Kevin pleads not guilty. Margaux objects to allowing bail. Lucy leaps up as a character witness and talks about how wonderful and supportive Kevin is. She’s sure he’s not a flight risk and she’d be happy to take him into her custody. He’s given bail. Nora thanks her client for not pleading guilty. 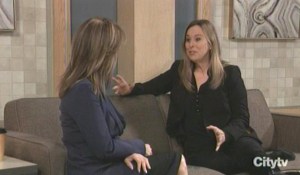 Alexis meets with Laura at the hospital and hands her divorce papers. Laura is having second thoughts. She doesn’t know if she can trust Kevin, but she still loves him. The mayor can’t understand his bad judgement. Alexis talks about her own lousy judgement with Julian… but Kevin isn’t Julian. She encourages Laura to take her time making her decision. Laura asks her to help with something else. She pays Kevin’s bail. Across the hall, Franco and Liz argue about the time he spent with the shrink and his brother. When she points out that his sessions did him some good, he’s outraged. Alexis interrupts them and says Gail’s bequest is tomorrow and they need to be there for it.

Back at the court house, Kevin is startled when he discovers his bail has already been paid. He crosses the room to thank Lucy. She can’t take credit for his bail.

Julian and Alexis face their pasts.

Kevin Suggests Laura Divorce Him as...

Gail Brings the People of Port...