Monday March 18, 2019: On General Hospital today, Dante tells his father his plan, Peter probes Sasha, and Jordan is released from the hospital. 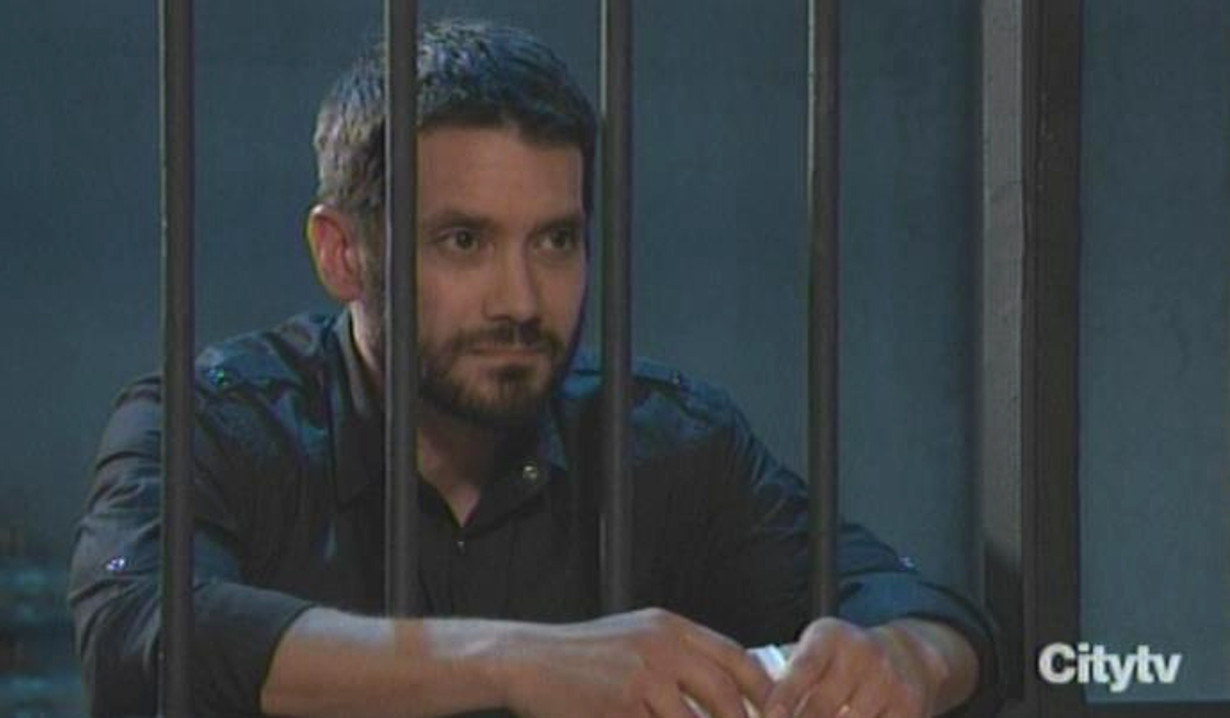 In Turkey, Sonny is told that Dante is happy to stay where he is. Handing him a gun, Raj prompts Dante to prove his loyalty by killing his father. Dante points the gun at Sonny and takes a shot. 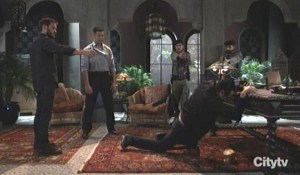 Raj is disappointed that he barely hits Sonny’s arm. Dante explains his father is more useful alive and runs a trade route into Canada. Raj agrees to check on Sonny’s reputation and think this over. After bloody Sonny is taken down to a cell, Dante drops by to see him. Sonny has guessed that he has things planned out. His son apologizes for shooting him. Sonny explains that Franco stabbed Lulu. She’s okay but Dante needs to go home. The cop explains he was on the way when Sonny showed up. Raj held him prisoner for months as he tried to convince him he could be an asset to his business. Raj wants to use him in the PCPD as a plant. Dante is afraid to leave his father alone. Sonny suggests that he ‘kill’ him before Raj can. 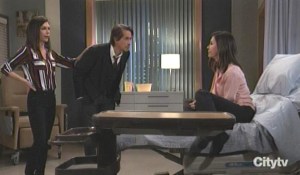 At the hospital, Finn rushes into a hospital room and discovers the blind Alex. Anna pops up and introduces them. Alex is eager to be cured. Finn isn’t in a rush to aid a fugitive, but Alex is sure her sister would be willing to cut a deal. Anna demands to know which memories have been planted in her brain. She tells her sister about the memory swap and Alex feigns ignorance. Anna repeats her demands. She gets distraught and Alex chuckles. She admits that she was well-paid and doesn’t see the big deal. Besides, she thinks Anna may be better off not knowing which sins she really did commit. Down the hall, Marcus runs into Stella. He tells her that Yvonne took a fall. She’ll be fine, but Mike is upset. He called Mike’s family to look after him. Stella is impressed. Marcus asks her out for dessert, but she needs to stick around for Jordan. Curtis drops by his wife’s room with clothes and tells her she’s being released. Jordan is eager to get back to work. She’s sure she can work dialysis into her schedule. He assures her she will find a donor. As they kiss, Stella interrupts to give Jordan some pamphlets about her recovery. She reassures Jordan that she has a healthy future ahead. “And maybe a little one one day,” Curtis adds. That’s news to Jordan. Stella suggests they talk to a doctor about that and leaves them alone. Curtis apologizes but Jordan says they should talk about this. He says that can wait. Meanwhile, Marcus bumps into Stella again and gives her some pie. She asks him out for sandwiches. 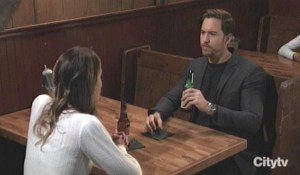 Sasha corners Peter at The Floating Rib, eager to talk about Nina’s wedding. She knows about his past with Valentin and worries he might try to sabotage his wedding day. They discuss her ‘honest’ relationship with her ‘mother’. When Sasha says Nina deserves something good, he wonders if that is her. Across the room, Lulu and Maxie sit at a table. Lulu complains about her problems until Chet shows up. He’s working at the bar. Maxie brings up him being Mr. October in the men with MS calendar. He blushes and Lulu worries about her possibly dead husband until she realizes it might upset Maxie. 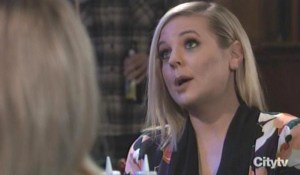 Her friend says it’s fine because Chet has helped her get a more positive attitude. She shares baby photos and Chet gets back to work. Lulu wonders if Maxie has feelings for Chet. Maxie insists they are just friends, but her friend thinks he’s very flirty. Peter interrupts and Lulu takes off. Peter tells Maxie that he thinks Sasha might be onto them. Meanwhile, Mike, Carly, and Michael sit at a table. Mike thought they were looking for Yvonne. They remind him they are out for dinner. He wonders where Sonny is. Carly insists he’s busy with work, but he worries she’s been fighting with Sonny. He starts worrying about Yvonne again and is eager to go back to the home. The food arrives but Mike is still eager to go. Carly announces that she’s pregnant. They’re amazed. Michael heads off to get drinks and Mike asks her to call Sonny. Sasha bumps into Michael at the bar. He offers to buy her a drink. They discuss being single and he tells her about his ex. When he says he likes her, she says she likes him too and then runs off.