Friday March 1, 2019: On General Hospital today, a stabbed Franco makes his way to Liz, Ryan pushes Ava to marry him, Lulu gets closer to the truth about Ryan, and Curtis learns Jordan will need a transplant. 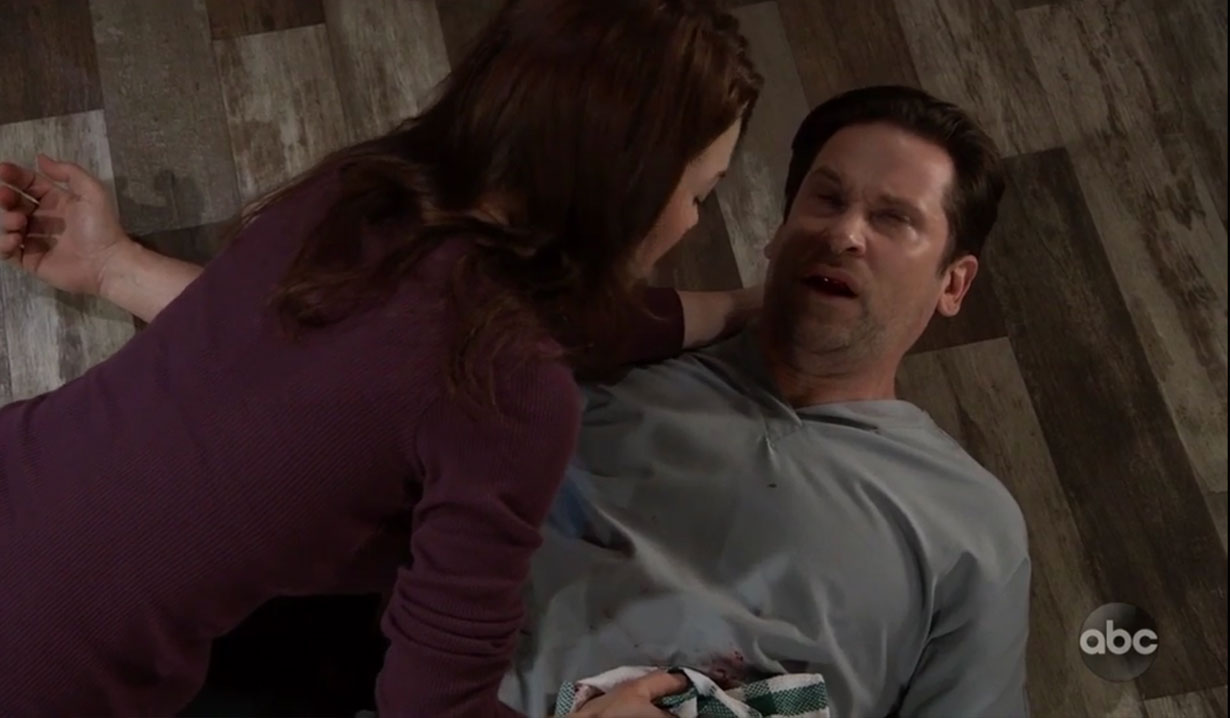 At GH, Carly finds Jason has been released and they chat about Sam and Shiloh. Jason tells her not to worry about it and stress the baby. 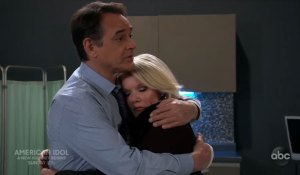 Carly tells him about Franco’s interview with Lulu, and that Franco called Ryan Chamberlain by the name Tom Wilson. She remembers the man in the room next to her at Ferncliff was Wilson. Jason warns her not to go to Ferncliff and put her and her baby at risk. Elsewhere Curtis waits for news and Nina stops by to check on him. Finn arrives with news on Jordan. She is stable, but the remaining kidney is compromised, so she’ll need a transplant. In an ER room, Ava finds “Kevin” being bandaged. She asks what happens, and Chase explains Franco escaped and injured “Kevin.” Ava can’t believe “Kevin” risked his life to stop Franco. Chase gets a call and excuses himself, and Ava demands “Kevin” explain why he went to see Franco. He didn’t want to stress her, and he thought he could help Franco and discuss his case with the doctors there. 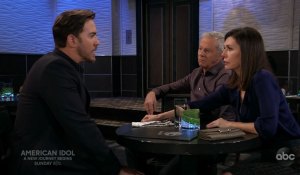 At the Metro Court, Anna and Robert meet with Peter to discuss patients 1 through 5, and Dr. Cabot. Peter swears he never heard of Cabot, and only worked with Dr. Klein. However, Klein worked for the DBX and likely had Cabot’s original study notes, which means Andre should also have had them. Anna thanks him for the information and rushes off. Robert questions Peter about withholding this information from them and thinks he’s a chip off of Faison’s block. Peter warns Robert not to push him, which only proves to Robert he’s like his father. Peter tells Robert to leave him alone and he will reciprocate, but Robert doesn’t trust him because one of these days he’ll revert to being Faison’s son and implode. When that happens, Robert promises to take him out. 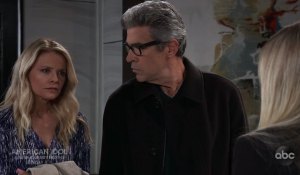 In the Invader offices, Mac and Felicia stop by and Lulu explains her memories about the night she was attacked and remembered discovering two more possible victims of Ryan’s. Mac reaches out to the police in Texas and learns both women were missing their drivers’ licenses and were likely unknown victims of Ryan. Felicia asks how Lulu learned about the new victims, and she explains Laura saw a list of Ryan’s victims in Kevin’s office. They wonder how Kevin got the names, so Mac suggests they talk to Kevin. Mac and Felicia depart, and Maxie suggests Lulu come home with her and rest. Lulu can’t rest until she remembers what happened when she was attacked. 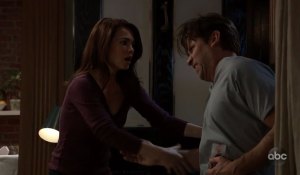 At home, Liz is shocked when a stabbed Franco appears banging on the door. She gets him in and onto the floor of the kitchen and tends to his wound. She asks what happened. He tells her to call the police. She calls them and for paramedics

Back at the hospital, Chase informs “Kevin” and Ava that they have a location on Franco and he’ll update them when he knows more. Chase departs, and “Kevin” asks Ava to go to Canada and marry him tonight. Ava agrees, so he tells her to go home to pack, because they will be jetting off for a proper honeymoon someplace warm. She tells him she’ll meet him back at GH and leaves. On her way to the elevator, Ava gloats to Carly that she and Kevin are rushing off to marry. Mac and Felicia arrive as Carly is gobsmacked by Ava’s news. Ava takes off, and Felicia thinks this has to be a lie. Carly says it’s too insane not to be true. Elsewhere, Anna meets with Finn and tells him Peter’s theory about Klein’s notes. Anna spots Jason nearby and brings him up to speed. She asks if he remembers his time at the clinic and talk of any other patients, but he doesn’t because he was so drugged. She knows Sonny had Klein bailed out of the PCPD, and wonders if Jason “disappeared” him. Jason says as far as he knows he was let go, but Anna isn’t convinced. Back in Jordan’s room, Nina decides to get Curtis a change of clothes from his place, looks for Jordan’s keys in her purse, and sees her phone has a voice mail from “urgent.” In the garage, Ryan puts his lock box of licenses in the trunk of his car. When he closes it, he finds Carly standing behind him.

Back at Liz’s, Franco tells Liz he lied about killing the people, and it was Ryan Chamberlain. Chase the cops arrive and clear the paramedics to enter. Franco is loaded into the ambulance, and Liz tells Chase that Franco told her he lied, and that Ryan Chamberlain killed everyone. She assumes he was delirious.

Felicia confronts Ryan in the garage for answers.

In the basement of Ferncliff, Laura tells Kevin they are in trouble.

Carly tells Ryan she noticed what was in his trunk.

Ryan Locks Carly in Truck of...