Ryan’s Eyesight Is Restored and He Immediately Targets Lulu Again

Friday January 25, 2019: Carly is thrilled by Jason's news, Franco and Liz discuss Aiden, Robert returns with new information, and Peter is cleared as a suspect in the killings. 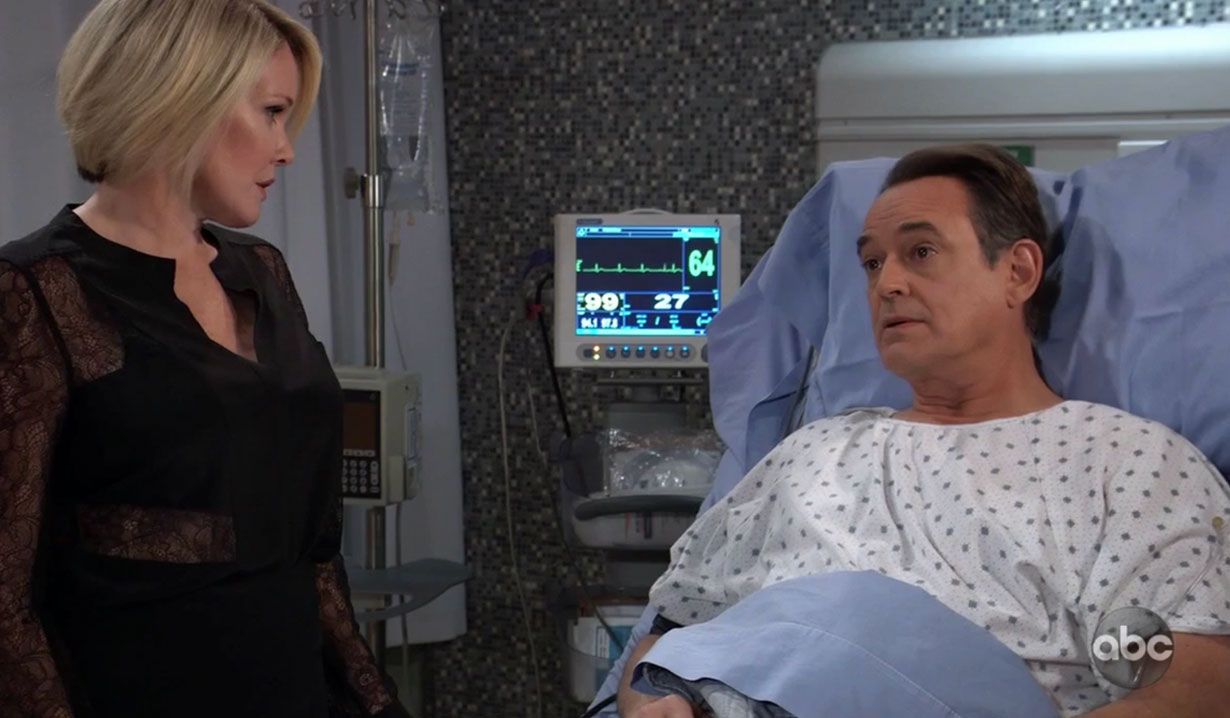 Sam wakes up in bed with Jason and they can’t believe this is really happening. Later she finds he has made breakfast and talk turns to their plans for the day. 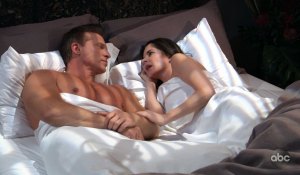 Jason reveals he’s going to meet Spinelli, who has been looking into the emails she’s been receiving. She is worried something will happen to take away their happiness, just like five years ago when he walked out the door. He promises he is coming back, and he will keep her informed on his whereabouts throughout the day. 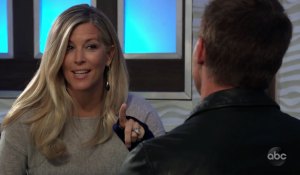 Carly finds Drew at the Metro Court bar. Carly tells him how sorry she is about Oscar and she doesn’t know how he’s keeping it together. He is looking for the happy moments in each day, which someone special advised him to do. Later, Jason arrives, and Carly gives him a big hug upon seeing he’s safe. He promises his worried friend that he’s okay, and reveals he’s back with Sam. She’s thrilled and tells him it’s about time. Jason gets a text that Spinelli’s plane has been delayed, so he decides to get back to Sam, but thanks Carly for always being there. 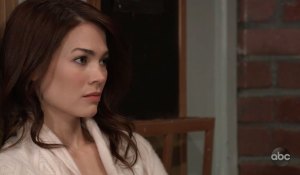 At Liz’s place, Franco and Liz discuss Aiden, and whether he could be gay. Franco asks her if it would it be a problem for her. She can’t believe he’d even ask that. She would be proud of her son and that he lives in a more open world, but Franco admits part of him is scared because not everyone sees things the way they do. Whether he is or isn’t, they realize the more pressing matter is stopping the bullying. Later, Liz gives Aiden a hug and tells him to remember that she’ll always be proud of him. 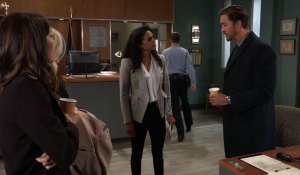 At the PCPD, Anna and Maxie are present to support Peter, who is called in for questioning. Peter it taken to interrogation by Jordan, and Jordan tells him about the footprint found at the crime scene, which seem to match the style of shoe he is wearing. Peter offers his shoes, which aren’t a match to the size of the bloody print, and he reminds Jordan that he was at her wedding when Kiki was murdered. Jordan looks to have it verified, and Peter convinces Anna she can stop worrying and go. Maxie promises to inform her if anything changes. After she leaves, Maxie tries to get Peter to lighten up on his mom. Jordan returns and clears him after looking at the footage from the wedding around the time they know Kiki was murdered. 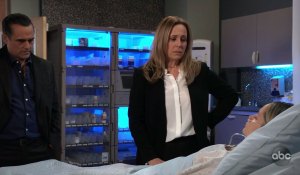 Laura sits by Lulu at GH, where she remains unconscious. Sonny joins her, and Laura asks if he’s been able to contact Dante. He hasn’t reached him yet. Laura admits she is scared because they are both part of that club that knows sometimes the worst can happen. Sonny promises her that Lulu will wake up to Laura by her side. He decides to go, but before leaving tells Lulu not to stop fighting. Later, Lulu begins to stir awake and squeezes Laura’s hand. Laura rushes out to get a doctor. In his room, Ava waits with Ryan, who is anxious to know if his eyesight has been restored. Griffin arrives to remove Ryan’s bandages, and he and Ava exchange looks, and she notices a cut above his eye. He claims it was a shaving accident and tends to Ryan. He removes the bandages and Ryan is able to see. Griffin checks him over and agrees to discharge him later in the day. Ryan is glad to hear that because he has pressing matters to attend to. Later, Ava catches Griffin on the phone making plans with someone, and she hopes he’s not doing anything stupid. He feels it’s none of her business. She inquires about Lulu and hopes she wakes up and tells them who killed her Kiki. 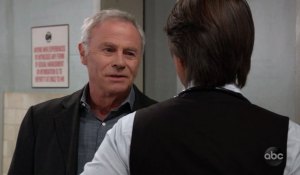 In the hall, Robert confronts Finn and asks if he could get Anna to return his calls. Robert has intel on Anna’s sudden blindness, and Finn offers it to give it to her for him. Robert knows he’s hooking up with Anna and warns the doctor that she can be high maintenance. Anna appears and wonders why Robert’s there. He brings information on the DBX doctor who was involved with the virus and it turns out Kevin once worked with him. Anna and Finn realize Kevin lied to them about his connection to the bureau and Arthur Cabot. Meanwhile, Ryan heads to Lulu’s room and hovers over her bed as she wakes up and stares at him.

Back at her place, Sam tries to keep herself from calling Jason to check up. Jason returns and she rushes into his arms. He tells her, “I told you I would come back.”

At the Metro Court, Sonny meets with Carly, who tells him that Jason and Sam are finally back together.

Sam and Jason meet with Spinelli, and Sam says she knew Shiloh was lying all along.

Shiloh tells Kristina that it seems the mystery has been solved.

Curtis tells Jordan there is something they aren’t seeing. Jordan notes Lulu is an eye witness.

Robert thinks Kevin could have had a secret life.

Ryan tells Lulu not to fight.

Sam and Jason Have Sex After She...

Ryan Tries To Smother Lulu With a...