Cameron Receives a Verdict in His Pot Case

Wednesday January 9, 2019: Laura and Ned wait for the election results, and Jordan and Margaux chase a lead in the killer case. 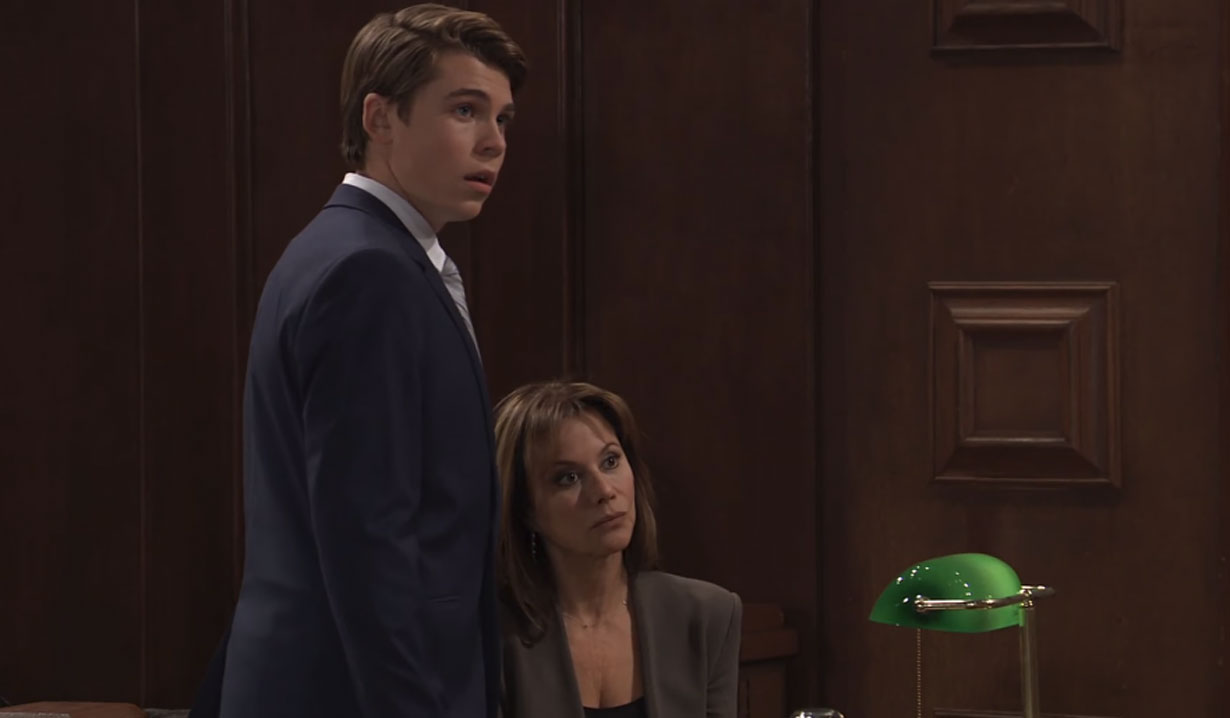 In the court house, Alexis advises Cameron to look contrite. She’s hoping for a soft-hearted judge but doesn’t get one. Judge Carson calls the court to order and Alexis makes a plea for her client. The judge isn’t impressed but allows Cam to read his apology. He promises to be a better person. Liz gets up and says her son’s apology was incomplete. 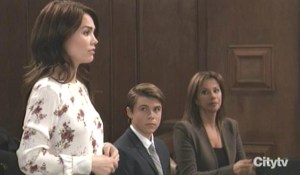 She explains that Cam bought the pot for his friend, who has cancer. Drew arrives as the judge lectures Cam for intervening in Oscar’s medical treatment. Drew says that he and Oscar’s mother can attest to Cam’s character and insists that he acted out of compassion. That makes him heroic in his eyes. The judge calls a recess to ponder her decision. Liz thanks Drew. Following deliberation, the judge returns and agrees to an adjournment, community service and counseling. If he doesn’t get charged with anything over the next year, his record will be clean. Cam and his family thank Alexis. Liz tells her son that he needs to get a job to pay the legal fees. Drew gives him his card and says he can help him out with that. Cam hopes that they can go hiking with Oscar. 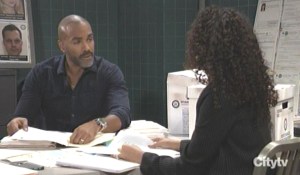 Curtis and Jordan go through Ryan’s files at the PCPD. Margaux asks Jordan to speak to her in private. This leads to some friction. Jordan announces that the killer may have had access to police files. All of Chamberlain’s victims lacked their driver’s licenses, as do the latest victims. Jordan calls former commissioner Sean Donnelly. Unfortunately, she only gets his wife since he has serious memory problems. She does suggest that they speak to Mac since he was around for the original cases. 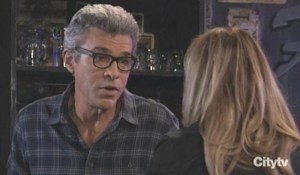 At The Floating Rib, Laura talks with Carly and Sam about the election. Mac wishes that Kevin was there to offer Laura some support. She’s relieved that if she loses, at least it will just be Ned in office. Carly and Sam sit at a table and worry about Oscar and Drew. They talk about how hard all of this will be on Joss, especially since there is no one to blame. Carly gets more drinks and talks to Laura about the mystery patient at Ferncliff. She says there is no evidence that Wilson exists outside of Kevin’s claims. Jordan and Curtis arrive to speak to Mac. They sit down and talk about the driver’s licenses. He doesn’t remember anything about that. 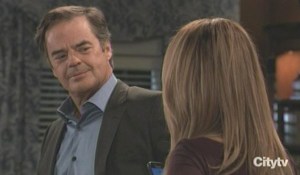 At the Quartermaine estate, Ned and Olivia wait for the election results. He says she was Port Charles’ best first lady. They happily watch their interview with Lulu on TV and eat popcorn. He turns the channel. He doesn’t want to sit around watching the returns come in and would rather binge watch a show. Olivia admits she’s not sure she wants him to win because she worries that the killer would target him. Ned assures her that he’s safe. He still thinks they should quit while they’re ahead. She misses their privacy. 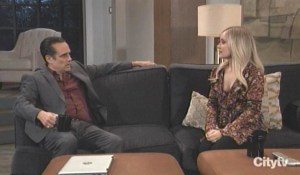 Sonny drops in on Lulu at her place. The kids are out so they talk about Dante. She explains that he’s going further undercover. Sonny reminds her that he has people watching the house since there is a killer on the loose. She’s already assured Dante that everything is okay. As Sonny leaves, he suggests she tell his son to come home. Later, Margaux shows up and accuses Lulu of having privileged information about the serial killer. Lulu says the PCPD cleared her access to the files. She wants to record this conversation, but Margaux insists on staying off the record. The DA explains that the killer may be copying Ryan. Lulu can’t think of anything unique about the killings. Margaux suggests she keep this quiet. As soon as she leaves, Lulu starts going through the Chamberlain files.

Sonny goes to The Floating Rib. He takes Laura aside and tells her it’s okay if she distances herself from him after she wins. She’s not okay with that and says she has nothing to hide. They hug. Alexis arrives and assures Laura she’s going to win.

Margaux and Jordan meet at the PCPD. They can’t be sure that serial killer had access to the files and Jordan suggests the two killers may just take the same trophies.

Lulu tells Peter about her visit from Margaux.

Someone gives Anna another shot.