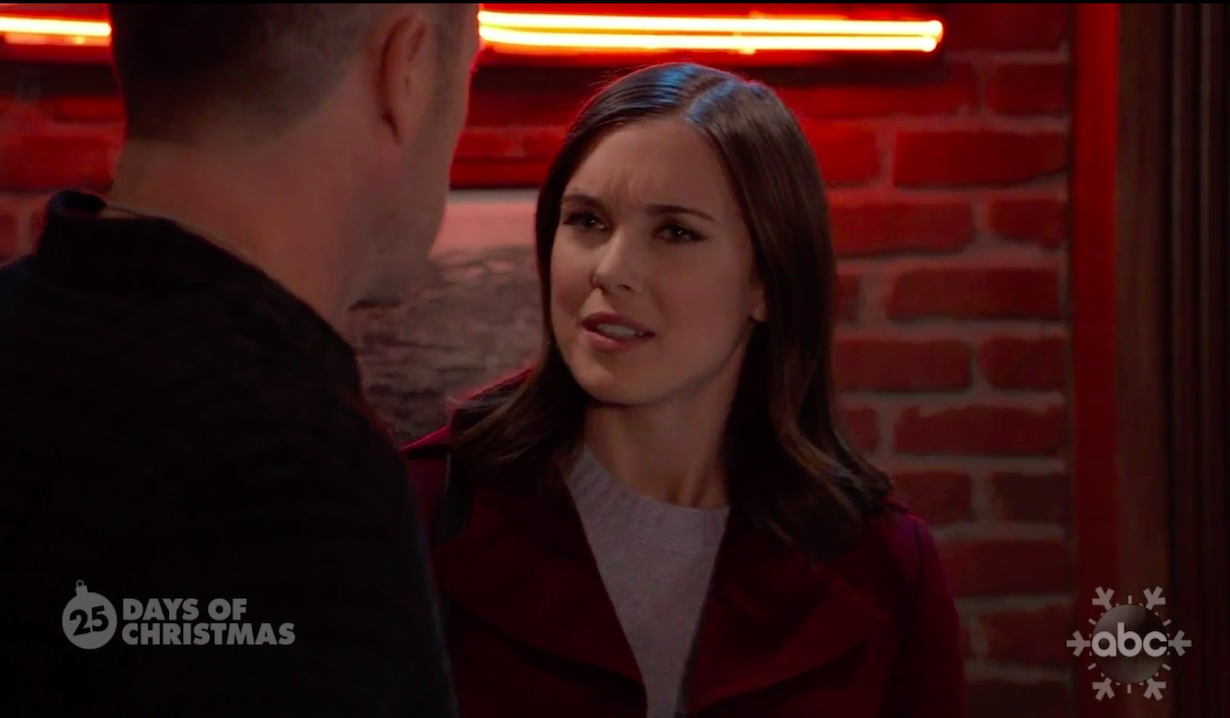 Maxie brings gifts to the hospital for Toys for Tots when she runs into Chet (played by Chris Van Etten). They catch up and she insists he come with her when he says he doesn’t have holiday plans.

Willow returns to Charlie’s. Julian didn’t think he’d see her again. She didn’t either. She recalls Julian coming to her classroom to convince her not to take her son away from Lucas. She points out that he never should have known her identity, therefore the terms of the adoption were violated. He reminds her he didn’t bribe or threaten her. He just stated his case and she put her son’s needs ahead of her own. She cries as Julian shows her photos of Wylie. She notes he looks happy. He assures her Wylie’s parents and entire family love him and that he’s keeping his distance like she requested. She wonders if Julian thinks she could keep her distance as well. He says she’s the only one who can decide that.

More: Who tied for most annoying GH character?

Jordan and Curtis bring pies to Anna’s holiday gathering. The doorbell rings and Anna runs to open it to Peter. Anna is pleased he came. He credits Maxie and heads to the kitchen after greeting Finn. Stella is next to arrive. She and Jordan 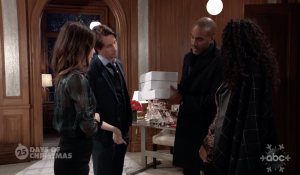 have a friendly chat and then Jordan breaks the news about Mike. Chase shows up and asks if he can invite Willow to join them. Finn is pleased to hear about the teacher and Anna of course says yes. However, Willow declines his offer via text. After sharing some nice moments, Anna gives Peter a flash drive with her WSB info on it so there are no more secrets between them. Maxie enters with Chet in time for the festivities.

At home, Cam crafts a letter of contrition to the judge regarding his pot buying exploits. Liz joins him on the couch, as Franco, Aiden and Jake return home. Liz worries about Aiden to Franco, while the boys play. When alone, Aiden asks Cam how to get people to like him. Cam tells his brother to like himself and then everyone else will catch on. He tells Aiden how cool he is and they hug before heading off to the hospital with the rest of the family. 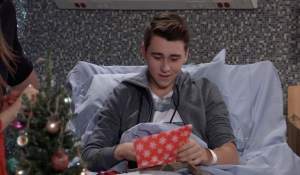 Oscars opens a Christmas gift from his parents in his hospital room which are car keys. He’s thrilled. Monica enters and says she has the perfect accompaniment to his car, but he won’t get it until tomorrow. She then orders them to attend the annual reading of the Christmas story. Monica later runs into Bobbie who says they have a Santa problem… the suit has been eaten by moths. On the stairs in the lobby, Oscar comforts a young girl who worries Santa won’t be able to find her in the hospital. When he learns the Santa suit is ruined, he insists they figure it out because the little girl needs to see Santa. 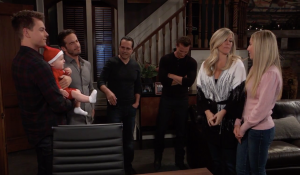 As Carly praises Joss for trying to make Avery’s Christmas a good one at home, Sonny opens the door to Lucas and Wiley. They join the ladies in the living room and Michael and Jason soon follow. Sonny heads to the terrace where Mike is waiting to give his lady her present. He wonders where she is and Sonny says they’ll give her some time. They sit and discuss a Christmas in their past when Mike bought them football tickets. Mike can’t remember the actual day and wonders if he made it up. Sonny assures him it happened and they had a great time. It’s one of his favorite memories. After more reminiscing, they agree to live in the moment and not worry about what’s to come. Back inside, Michael leaves to go to the hospital, as Joss lashes out at Jason for keeping Oscar’s illness from her. He assures he was trying to help Oscar. Joss apologizes for blowing up at him and appreciates him being there for her boyfriend. She walks off and Carly reveals herself to thank her friend. Stella shows up to check on Mike, who returns inside with Sonny. Mike hugs Stella, as Sonny gets a call from Drew who could use his help. Sonny, Jason and Carly leave to save Christmas.

Back at the hospital, Michael runs into Willow at the grieving parents’ group. Meanwhile, Sonny, Jason and Carly arrive with a new Santa suit for Bobbie to wear as Monica reads The Christmas Story to the GH patients.

Due to the Christmas holiday, the December 23, 2005 episode will air in place of a new episode.