Thursday December 20, 2018: Wylie has a naming ceremony with his family, Willow has an encounter with Julian, and Valentin gets what he wanted for Christmas. 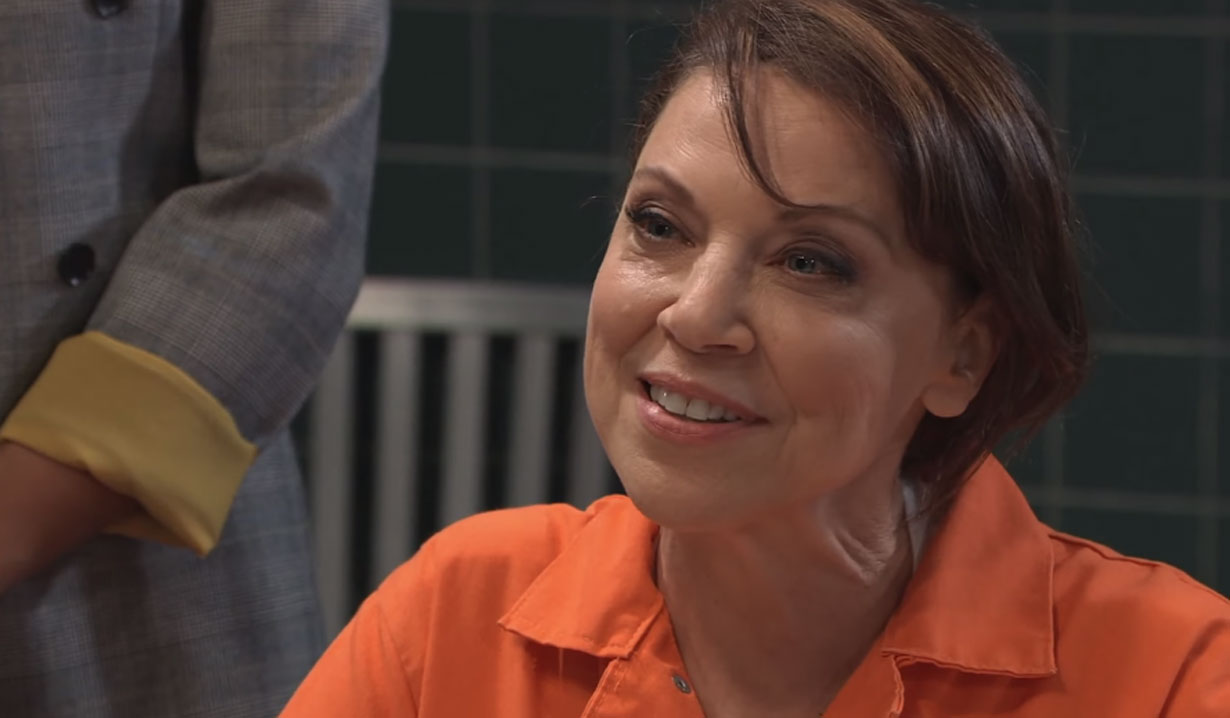 At home, Sam is on the phone to Curtis, worried about who is using her old alias. Alexis shows up and tells her that she can’t attend the naming ceremony because of a case. She’s eager to see Kristina, worried about how angry she still is. 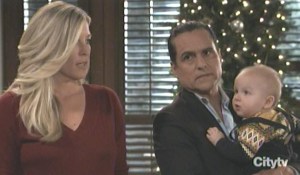 Bobbie, Lucas, Brad and Wylie drop by the Corinthos compound for the naming ceremony. “Think of me as the godfather,” Sonny tells the baby. Brad cringes. Things get more uncomfortable when Julian shows up. He’s not there to make trouble, just to pick up Avery for his sister. Sonny says Ava is in no condition to look after a little girl. As they debate this, Avery shows up. She wants to see her mom. Julian assures them that there will be a nanny present so they agree. As Carly gets her ready, Julian wishes Lucas and Brad well and then goes out to wait. Brad follows him and thanks him again for his help. Jerome advises him to stop torturing himself. Sonny brings Avery out. After they leave, Bobbie starts the naming ceremony. Sam talks about how honored she is to be the godmother. Lucas thanks Michael for agreeing to be the godfather. Michael makes a speech about how honored he is. Brad takes photos. Joss follows Michael outside and they talk about how hard it is to miss his baby. 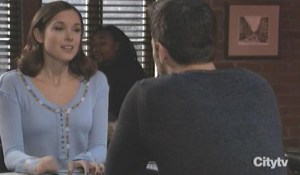 Chase joins Willow at Charlie’s for breakfast. Things start off awkward and she tells him she’s free all day. As they eat, they talk about Christmas shopping and how she likes to do it all at the last minute. She looks uncomfortable as he talks about how ‘Christmas crazy’ his mom is. He wonders what her childhood was like. Willow explains that her mom was a ‘free spirit’ who raised her alone and they drifted around a lot. Julian arrives with Avery. He relays that Ava is taking a nap and he suggests she look after the customers. She rushes over to Chase and Willow. Julian approaches them and Willow seems deeply affected by his presence. After Julian leaves with the child, Chase tells Willow that he needs to return to work in a minute. She wants to stick around there. When Julian returns, she approaches him as he looks at a photo of Wylie and nearly starts crying. Chase leads her out and Julian sighs. 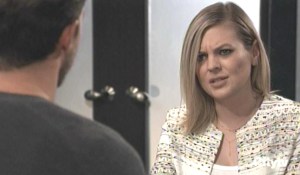 At the Metro Court, Maxie leaves worried messages for Nina until Peter interrupts. They try making plans until she gets a text from Anna saying Obrecht is being transferred to Pentonville. Maxie admits she has ambiguous feelings about this and can understand why Liesl freaked out. She’s sure that Nathan would not want his mom in prison. He gets a call from Valentin but won’t pick up. Maxie babbles about James until Peter says he must go. They agree to meet up after the holidays. 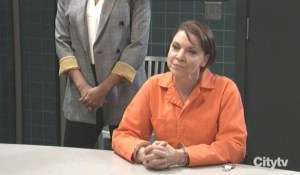 At the PCPD, Jordan tells Liesl that she won’t be escaping again. “Never say never,” Liesl says. She lashes out at them and they are smug. Before Obrecht can be taken away, Peter arrives and declares that he must make a statement before there is a miscarriage of justice. He claims that the period of his abduction was full of hallucinations. He knows that only his memories can send her away, but they are unreliable. Peter claims that he was with her voluntarily, coping with Nathan’s loss. They need to let her go. Once August has made his new statement official, Jordan is forced to release Obrecht. Once she’s gone, Anna corners Peter and he explains that he’s tired of living a life defined by hatred. Maxie and James have taught him to forgive. He’s trying to be the man Nathan would have been proud of. Anna hopes he can forgive her too. She asks him to her Christmas party, then tears up and leaves with Finn. 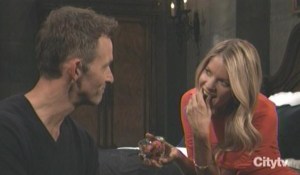 Nina wakes up in bed with Valentin. She realizes she’s late for a meeting. He tries to convince her to stay but she needs to go. Nina tells him that he’s her home now and she thanks him for bringing her together with her daughter. He gets breakfast and she gets dressed. She fights with someone on the phone. For a minute, he imagines she’s learned of his deception, but she hasn’t. Nina starts planning their holiday. He gets pensive as she talks about family. He tells her that he’s made mistakes and needs to be honest. Obrecht calls him and says she will keep his secret now that she’s free. He smirks and tells Nina Santa just called him. He’s never letting her go. They have sex and lounge around in bed.

Liesl shows up in the Metro Court and tells Maxie that all the charges against her are ‘kaput’ thanks to Peter. She’s sure someone must have appealed to his conscience. Maxie shows her pictures of James.

When Sam gets home, she checks her messages and sends ‘Linda’ a message saying she doesn’t need her help.

Oscar tries to do some good for the holidays.

Valentin and Nina Have Sex After a...