Monday December 17, 2018: Charlotte apologizes to Aiden, Franco figures out what Cam's been up to, Sam and Jason grow closer, and tensions run high at Turning Woods. 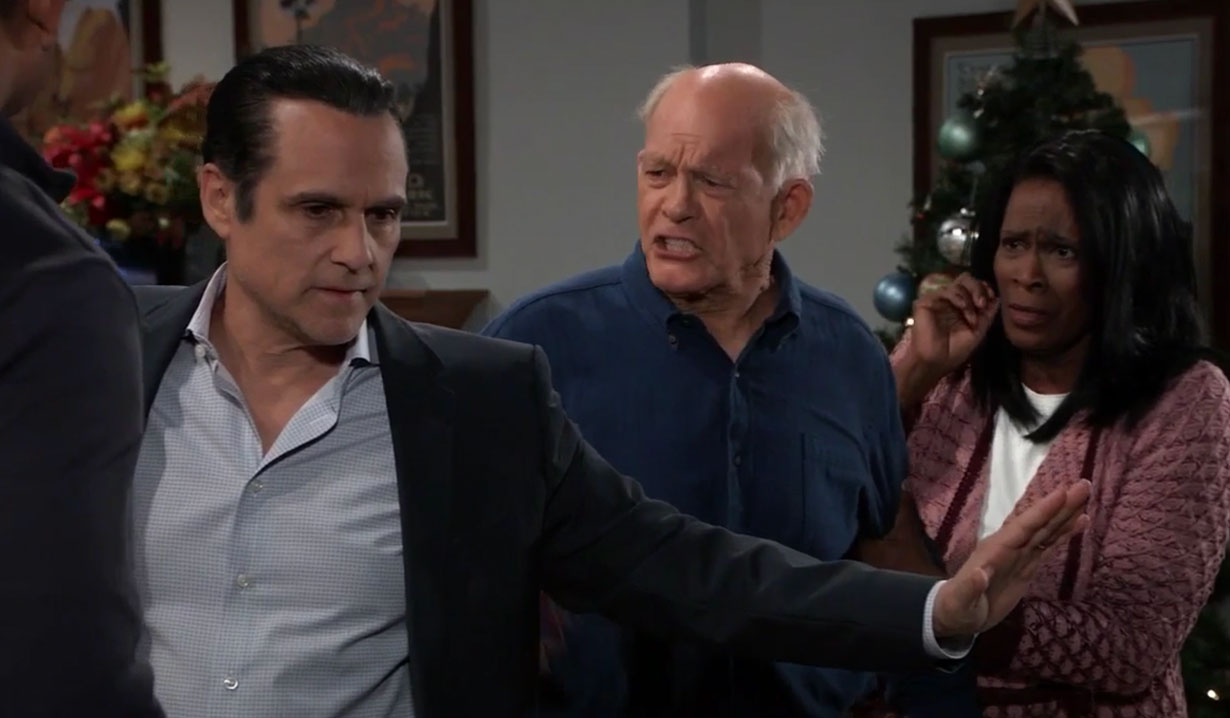 Sam, Jason and Danny stop by the hospital to drop off donations for Toys for Tots. Danny wonders why Santa doesn’t bring these kids toys. Sam explains that sometimes Santa and his elves need help making sure everyone gets a toy. She suggests they all talk about this at home. 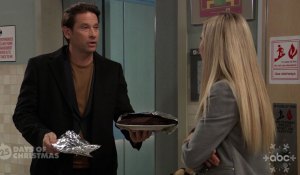 Danny becomes excited that his dad is coming home with them. Meanwhile, Cameron stops by Oscar’s room and receives another text to meet from the dealer in the parking lot of Charlie’s with the money. He responds again that the deal is off. In the hall, Franco runs into Joss with Cam’s brownies for the bake sale, but she lets him know there was no bake sale at their school. Franco says the school told him the same thing. Joss goes to see Oscar and finds Cam there. She tells him about running into Franco with his brownies, and she laughs at the idea of him baking. She grabbed one though and thought Oscar might want to have one. He has some of it, and Cam claims he needs to go and rushes out. Cam runs into Franco, who confronts him about the fake bake sale. Cam gets another text from the dealer claiming he still owes him money even if he doesn’t want the product. Cam tries to explain he misunderstood about the bake sale and it was all to impress a girl. He has to go and rushes off, leaving his phone behind. Franco glances at the texts and exclaims, “Oh, dude!” 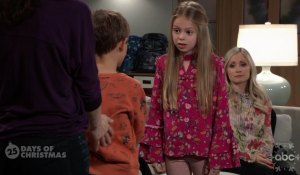 Lulu and Charlotte stop by Liz’s place and Lulu explains that Charlotte needs to apologize to Aiden for bullying him. Lulu reveals that Charlotte claimed she was trying to help Aiden fit in because he was different. Aiden comes downstairs and Charlotte apologizes for hurting his feelings. She thought he would get along better with the others if he did what she told him to do, and she realizes she was wrong and hopes he accepts her apology. Aiden accepts it and runs back to his room. Lulu and Laura are proud of the little girl. After Lulu and Charlotte leave, Liz talks with Aiden about being comfortable to talk to her about any problems. She promises him everything will be okay now. Later, Aiden goes to play a computer game, and when he loses the message “You’re a loser Aiden!” pops up. Meanwhile, Franco arrives home and braces Liz because he has something to tell her that she won’t like. 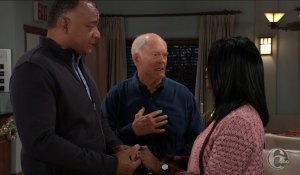 At Turning Woods, Marcus walks in just as Mike and Yvonne share a kiss under the mistletoe. Sonny keeps Marcus from attacking his father, and Yvonne cries that Mike is her boyfriend and they are going steady. Marcus tries to remind her that he is her husband, but Yvonne cries to Mike that she doesn’t know this man. Marcus takes Yvonne aside to show her photos of them to try and jog her memory, but she remains confused and thinks he’s her brother. Meanwhile, Sonny explains to Marcus that Yvonne doesn’t remember she is married, but he knew, and Sonny wonders if he’s just pretending to forget. Mike isn’t and explains it’s hard for him to hold onto little facts like this. Later, Sonny and Carly speak with Marcus, and they explain Mike never knew that Yvonne was married. Marcus vows to be around more often from now on. Later, Carly, Sonny and Marcus discover both Mike and Yvonne are missing, and Yvonne left the security bracelet she is supposed to be wearing in her room. 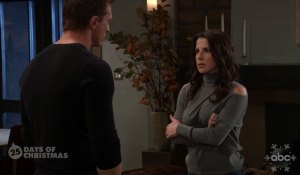 Jason and Sam return to Sam’s place and put Danny to bed. Jason notices Sam is preoccupied with her phone and asks if she wants to talk about what’s bothering her. Sam confesses that someone knows about her old con of marrying rich old men and has tracked her down. She fills him in on what’s been happening and assures him she’s not letting this person play games with her. She has more important things to focus on. The two come close to kissing. Sam suddenly remembers that Danny made something special and runs to get it. Jason looks at the tree and thinks about the sad little tree Sam brought home one year for them. Sam returns with a stocking with “Daddy” written on it. She asks what he wants Santa to put in his stocking. Jason tells her the only thing he wants is to spend Christmas Day with her. Sam thinks that can be arranged and they move in for a kiss.

Kristina asks Valerie if she trusts her.

Cam tells a drug dealer (played by Nick Alvarez), that the deal is off.

Jordan is surprised that Margaux is defending Sonny. She says Sonny has nothing to do with this.

Sam gets another email.

Sonny asks Marcus not to involve the cops.