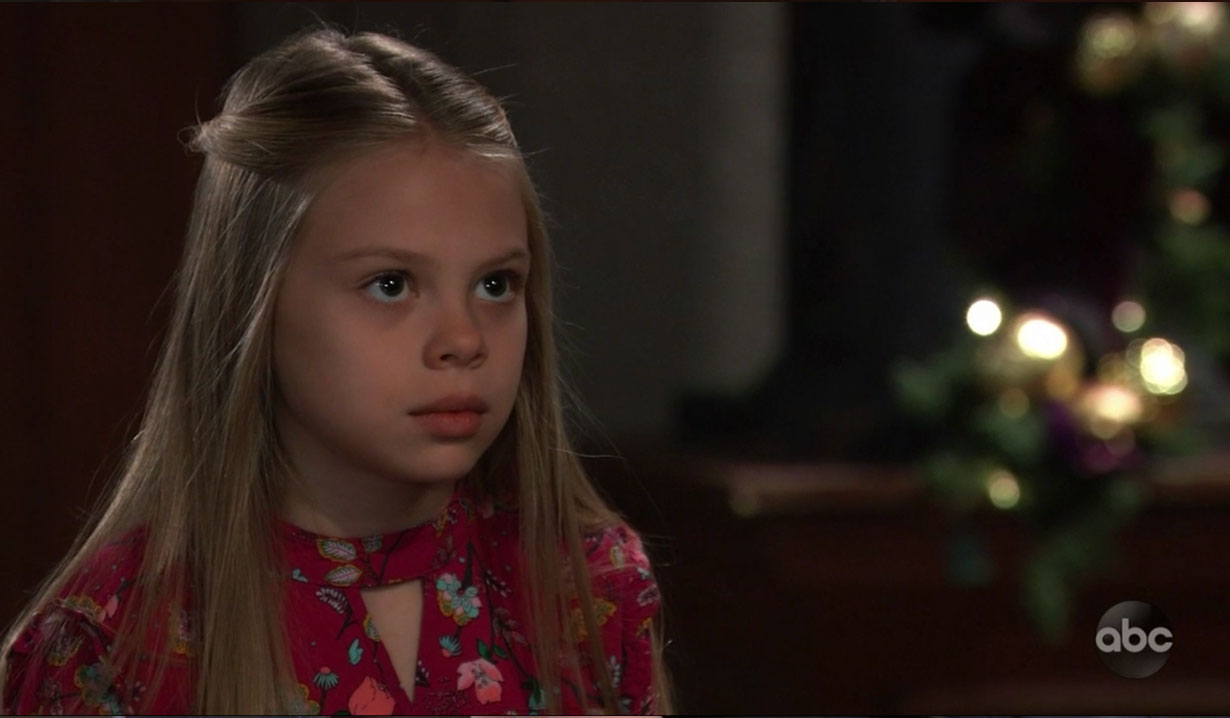 Curtis and Jordan peer inside Kelly’s and spot Marcus with Stella. Curtis suspects Marcus is the one who inspired Stella to come to the wedding. Inside, Marcus vents to Stella about Mike and Yvonne. Stella feels he’s not being fair to Yvonne, who is enjoying her friendship with Mike. 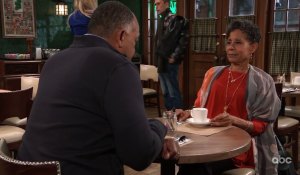 Curtis and Jordan interrupt, and Marcus decides to head out. Curtis walks him out, and Jordan thanks Stella for coming to the wedding and hopes this is the start of a better relationship for them. She is glad she’s reconnected with Marcus and admits to searching for him to try and reunite them, only to find out he was married. Outside, Curtis asks Marcus about Yvonne, and suggests Stella could help. Marcus says, “She’s done plenty already.” Curtis returns and Stella decides to go, but gives Jordan a pat on the shoulder.

At GH, Julian spies Kim leaning on Drew’s shoulder and leaves without a word. Later Kim and Drew speak with Franco and Liz and learn they’ve postponed. Liz and Franco head out, and Kim notices some odd emails on her phone. She finds that Julian has been making arrangements to have her groceries delivered and apartment cleaned. She knows she’s been ignoring him and feels bad. Drew offers to watch Oscar so she can go see him. 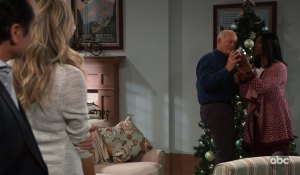 At Turning Woods, Carly and Sonny find Mike and Yvonne enjoying themselves. Yvonne cuts herself hanging ornaments on the tree, and when Sonny tries to help, Mike lashes out at him, not knowing who he is. Mike takes Yvonne off to look at her cut, and Sonny admits to Carly that his dad is getting worse and he doesn’t know how to handle this. 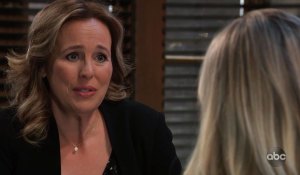 Outside of Kelly’s, Cam gets a call from Liz, who needs him to go home and watch his brothers because the sitter canceled. After he hangs up, he gets a text from a dealer to meet him in an hour. Inside, Laura reveals to Lulu that Charlotte has been bullying Aiden. Lulu is stunned and vows to take care of this immediately. Meanwhile, Alexis stops by the bar and invites Kristina out for a girl’s night at a spa, but she has to work. Julian enters and snaps at Kristina for leaving items on the bar, which is unprofessional. Alexis tells Julian that he needs to chill out. Julian fires Kristina and thanks Alexis for the advice, he feels more chill. He storms out, and she chases after him. They talk in the alley, and Julian admits Kristina isn’t fired and he’s just upset with how things have turned out. She heads back in to spend time with Kristina, and Kim stops by and tells Julian that he’s amazing for always coming through for her and taking care of her. Inside, Alexis looks out the window and notices Julian and Kim hugging. 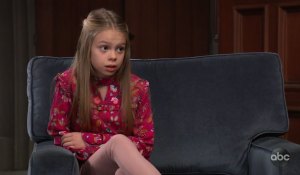 Nina packs up her things in order to move out of Wyndemere, but Valentin tries to convince her to stay. She refuses, and he swears he will never stop trying to win her back. Suddenly, Lulu storms in and demands they deal with Charlotte, who is bullying her own cousin Aiden. Nina continues to think Charlotte is not at fault and maybe Aiden should toughen up. Charlotte enters, and they sit her down to talk. Charlotte indicates it’s not her fault that Aiden is weird, and she tries to tell him how to act but he won’t listen, so it’s his fault nobody likes him. Lulu explains she is not helping Aiden but hurting him. They want her to be kind and respectful of Aiden, and she agrees. Lulu tells her there is one more thing she has to do. 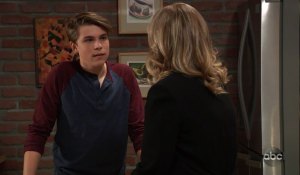 Cam returns home with brownie mix and ponders whether to bake or not. Laura drops by and finds Cam attempting to bake brownies and offers him a hand. Cam gets a text from the dealer wondering where he is. After they finish the brownies, Franco and Liz return home, and Liz relieves Cam of babysitting duty. He rushes out claiming to be headed to the school bake sale, and Liz sees he left his brownies. Franco tries one and realizes they are good and decides to take them to the bake sale for Cam. Laura prepares to tell Liz about Aiden when Lulu arrives with Charlotte.

Cam runs into Drew at GH and asks about Oscar. Drew reveals he’s sleeping. Drew leaves, and Cam texts the dealer that the deals off and he doesn’t need the product.

Back at Wyndemere, Nina let’s Valentin know she’s not moving out after seeing how Lulu talked to Charlotte. She needs to be here to protect Charlotte.

Marcus arrives at Turning Point to see Mike and Yvonne about to kiss under the mistletoe.

Danny is excited his dad is coming home.

Franco tells Liz she needs to know something.

Mike and Yvonne move in for a kiss.

Jason tells Sam he wants to spend Christmas day with her. 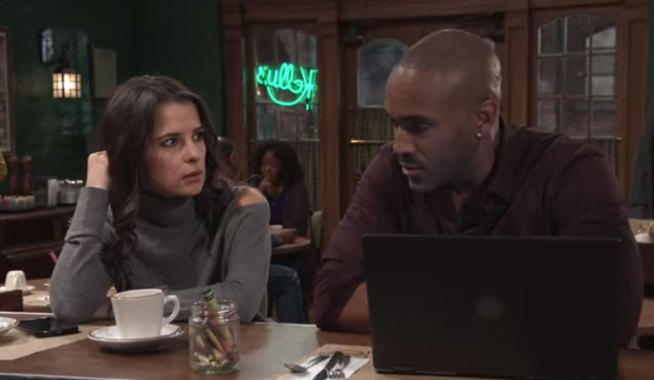 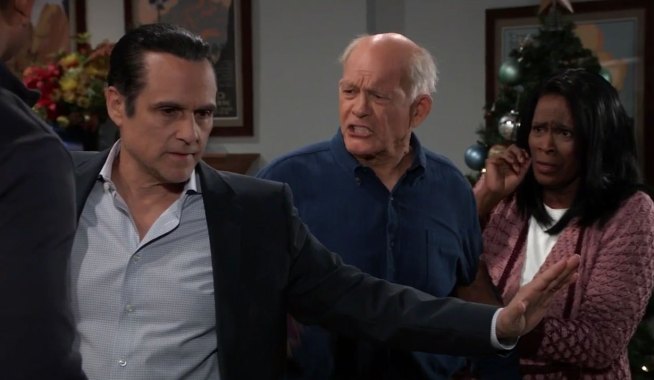