Monday December 3, 2018: Sasha is questioned by the police, Ava confronts Griffin, and Sam gets a shocking piece of mail. 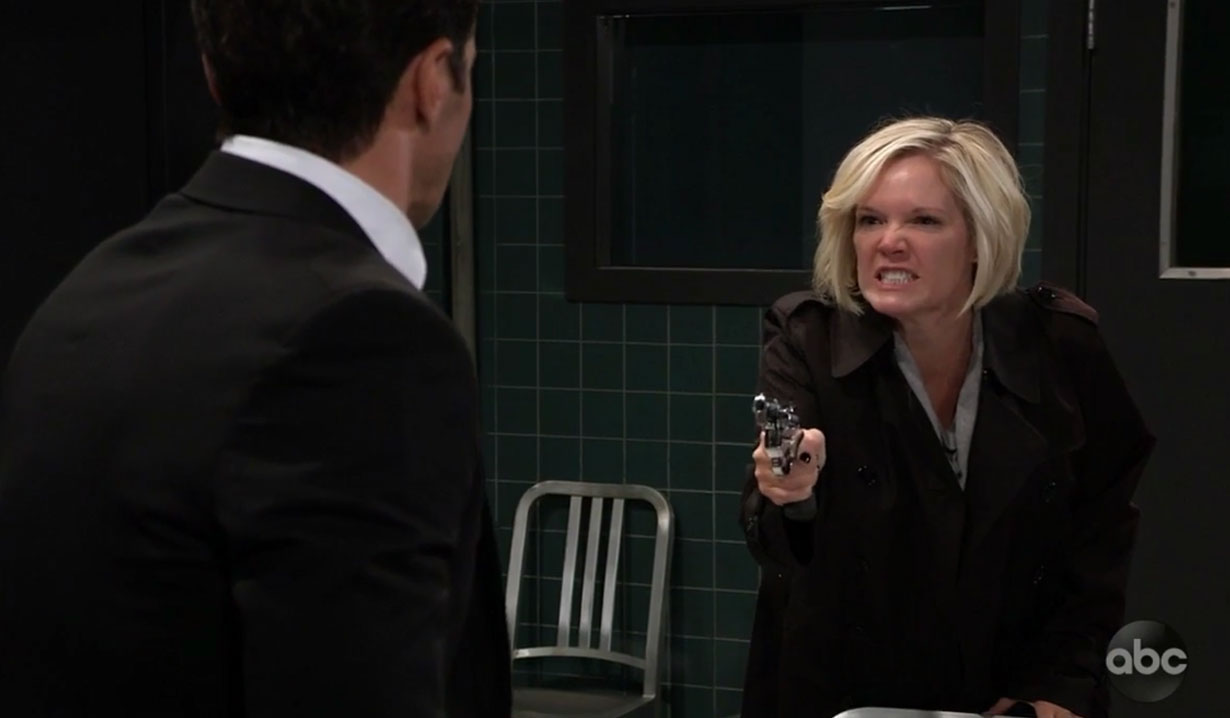 Jason returns to Sam’s and tells her that he ran into Drew at GH and learned Oscar has decided to go through with the clinical trial.  Sam is glad to hear this and likes that he and Drew are talking and not fighting.

At the PCPD, Alexis asks Jordan and the DA to have her client arraigned, though the DA is in no rush to let Griffin go. Alexis promises to make trouble for them if they deny her client his constitutional rights. She leaves and Curtis interrupts with new information for Jordan. 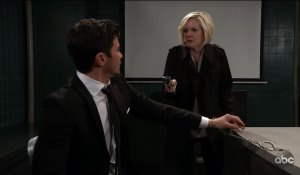 In the interrogation room, Ava pulls a gun on Griffin and vows to make him pay for taking her daughter. He begs her to look in her heart and see that he didn’t do this. While he may not have killed Kiki, she blames him from turning her and Kiki against one another. She believes she and Kiki would have eventually made peace, but now she’ll never hear Kiki forgive her, or say she loves her again, and she blames Griffin. Griffin tells Ava if she’s so desperate for someone to blame then pull the trigger. He has lost everything so she might as well shoot him.

At Ava’s place, Julian fears Ava is going to take justice into her own hands.

More: November’s comings and goings news for all soaps 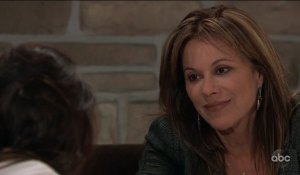 Alexis stops by Sam’s place with soup for Sam and interrupts her and Jason laughing about the Quartmaine curse of eating pizza on Thanksgiving. Jason leaves, and Alexis tells Sam about Kiki’s murder and that Griffin has been accused. Later Sam looks through her mail and finds someone sent her a newspaper clipping of an obituary for Leland Powell. Sam is shaken, and Alexis asks who this man is. Sam reveals he was her husband. 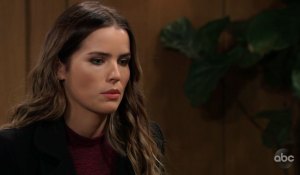 Nina accompanies Sasha to Jordan’s office at the station and reminds her not to say anything until Diane arrives. Jordan asks Curtis and Nina to step outside while she asks Sasha some questions. In the hall, Nina lashes out at Curtis for turning her daughter in. Meanwhile, Sasha answers Jordan and the DA’s questions, and explains how Ava set her and Griffin up to be found in bed by Kiki in order to get revenge on Kiki and Griffin. Jordan lets Sasha go, and the DA states this changes everything. Margaux leaves as Jordan takes a call from TJ about Kiki. Back in the interrogation room, Julian bursts in with “Kevin” and begs Ava not to shoot Griffin. Ava cries and asks “Kevin” what she should do. He tells her that she may feel a moment of relief after pulling the trigger, but then she’ll be locked away for life. She drops the gun and “Kevin” holds her. Chase walks in and demands to know what is happening. “Kevin” explains his patient came to confront her daughter’s killer and he rushed here to stop her. Griffin indicates Kevin’s story is correct and doesn’t rat out Ava. Later, Curtis reconnects with Jordan, who believes thanks to Sasha they have a new suspect. 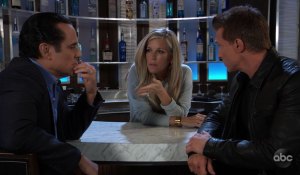 Jason joins Carly and Sonny at the Metro Court. He spoke to some people in Jersey and Margaux has not turned her mother in for her part in her father’s murder. Carly thinks this is the leverage they need over Margaux, but Sonny believes Margaux is no longer gunning for him and is busy with the Kiki case. Jason is shocked to learn Kiki’s been killed. Sonny excuses himself, and Carly and Jason discuss Kiki’s murder and the cops arresting Griffin. The topic shifts to Oscar, and Jason admits he’s known about the tumor for months. Carly knows she should be mad at him, but she is more worried about Joss who believes Oscar will pull through. She doesn’t know how to help her daughter if Oscar dies. Elsewhere, Sasha and Nina meet up with Valentin and tell him how things went. Valentin realizes Sasha is now mixed up in this murder investigation and insists she stay at Wyndemere for her own protection, which Nina agrees with and offers to stay with them.

Sonny visits Morgan’s grave. He feels neither he nor Kiki deserved to die, and hopes they are looking after one another. Sonny turns around to find Margaux standing there.

Ryan takes Ava home, and she wonders if Griffin didn’t kill her daughter than who is responsible. Ryan says, “I am.”

Epiphony asks Anna and Finn if they are out of their minds.

Maxie tells Felicia it’s too soon to have feelings for someone else.

Jordan demands the truth about Ava from Griffin.