Drew Reconsiders Using the Flash Drive to Restore His Memories

Tuesday November 13, 2018: Alexis talks strategy with Oscar, Monica learns about Oscar's lawsuit, Jordan and Curtis ponder the killer's motives, and Sonny tells Carly where he was the night before. 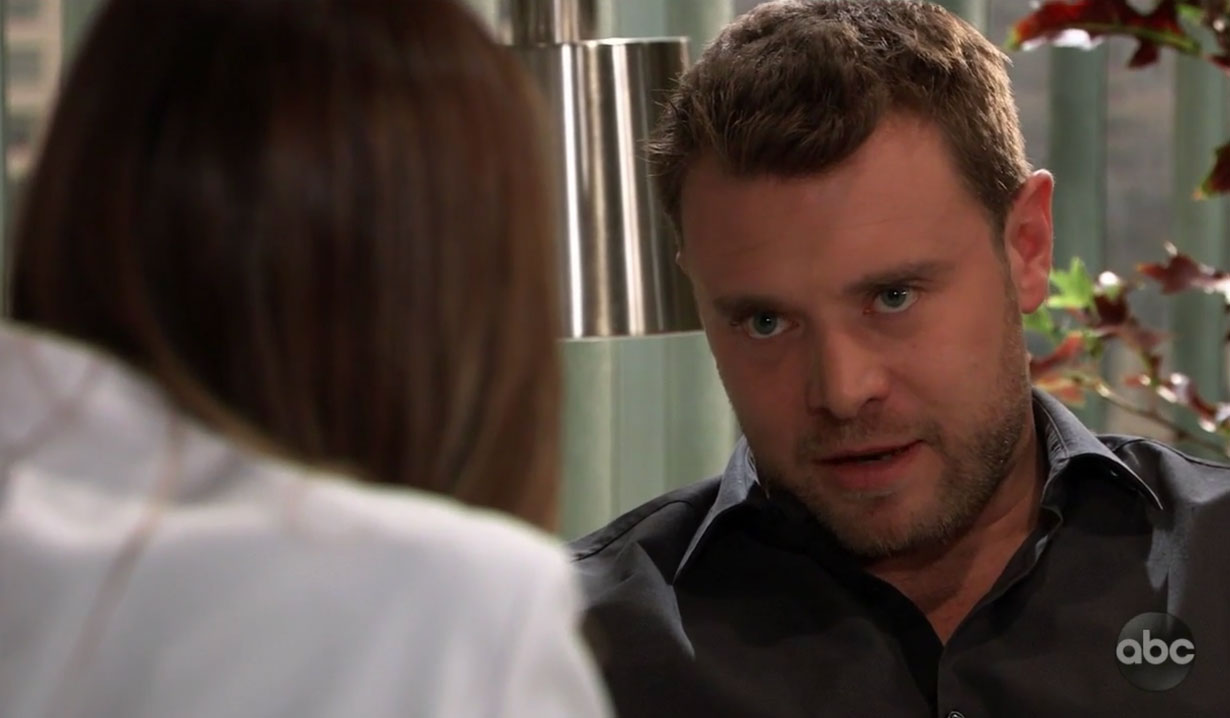 Alexis stops into Charlie’s to speak with Oscar about his hearing.

She hands him a stack of papers he needs to review, including tax forms, health insurance and getting his GED. He has no idea how to deal with any of it, which Alexis tells him he needs to learn to show the court he’s an adult.

Drew drops by Kim’s office at GH, where they continue to argue about pushing Oscar into the clinical trial. Monica overhears them, and they explain everything. She recalls a similar situation with Emily refusing to be treated for breast cancer, but that she came around thanks to someone who loved her very much. She leaves them, and Drew speaks about Emily and how he remembers her, but he never really knew her because he has Jason’s memories. He admits he’s been given another opportunity to get his memory back, but he risks losing all the memories he’s formed with the people in Port Charles. He feels like a hypocrite asking Oscar to take risks to save his life when he’s not doing the same for his own. Kim advises him the risk isn’t worth it. He assures her that he won’t do it because he won’t lose the memories he’s made with them.

Joss visits Cam at his place and tells him how worried she is about her mom, who is the target of another murder investigation. He suggests with all that she has going on they should cool it with the pretend dating plan. She refuses because it’s working and even Kim thinks they are dating. She suggests they grab breakfast.

At the PCPD, Curtis speaks with Jordan about the Mary Pat case and notices Carly’s photo on the desk. He wonders if she’s still a suspect. Jordan thinks she’s innocent, but the killer seems to have framed her and she doesn’t know if that was his motive or if the killing was about something else. Curtis feels the nature of the attack was personal, which Jordan suggests is the hallmark of a serial killer and Mary Pat won’t be the last victim.

Stella visits the Corinthos house to see Mike and take him to the center for the day. She suggests they get breakfast on the way. Meanwhile, Carly asks Jason if he’s heard from Sonny because he didn’t come home last night. He explains Sonny is working on a lead on Margaux. The conversation turns to the cops questioning Carly about the murder and Jason warns her the killer could be setting her up.

More: Watch the best of Sonny and Carly

Margaux wakes up on her couch with a hangover and finds Sonny is still there. He refused to leave her alone in the shape she was in, which she’s quick to note doesn’t absolve him of anything. They both receive texts about Carly being questioned again, and Sonny feels she was behind it. She swears she wasn’t, so he suggests they get back to Port Charles.

Sonny returns home and apologizes to Carly for not being there for her. They’re interrupted by Stella and Mike, and Stella leaves them to talk. Sonny lets his dad know the Croton business is finished. Mike departs to catch up with Stella, and Sonny tells Carly and Jason what happened with Margaux and her mother. Carly worries once Margaux gets over this wave of grief that she could still come after Sonny. Sonny is positive there is nothing to connect him to the job, and he feels Margaux is broken now. Jason suspects Carly may be right and Margaux may want to take her anger out on him since she can’t on her mother or Joe.

Margaux arrives at the station and Jordan comments that she’s a hot mess. Margaux spills all about her mother. Jordan says she has to decide if closing her father’s murder case is worth sending her mom to prison.

Back at Charlie’s, Julian confronts Alexis over her subtle way of pushing Oscar to reconsider the lawsuit by showing him how tough the road ahead is. Meanwhile, Cam and Joss show up and run into Oscar. After some small talk, Joss asks Cam to order them breakfast and walks away. Oscar asks Cam if he’s still going to claim he and Joss are just friends. Cam says, “Nope.” Cam tells Oscar that Joss needs someone who respects her and likes her, so he won’t promise nothing won’t happen between them. Joss returns and she and Cam depart. Monica stops in to see Oscar and informs him they have important things to discuss. Elsewhere, Mike talks with Stella about the center and the friends he’s making. Curtis arrives and speaks with his aunt and Mike about the wedding planning. Curtis hopes she will still come, but she refuses.

Liz tells Laura she has nothing under control.

Maxie asks Peter if he will go to Curtis’ wedding with Nina.

Curtis asks Nina why she hasn’t RSVP’d to his wedding.

Sasha warns Valentin the longer she stays the more likely she’ll be found out.

Finn Receives a Letter From Hayden...