Margaux Learns the Truth About Her Mother and Joe Scully

Friday November 9, 2018: Carly is questioned, Ryan makes a break with Ava, and Kiki is appalled by Sasha's behavior. 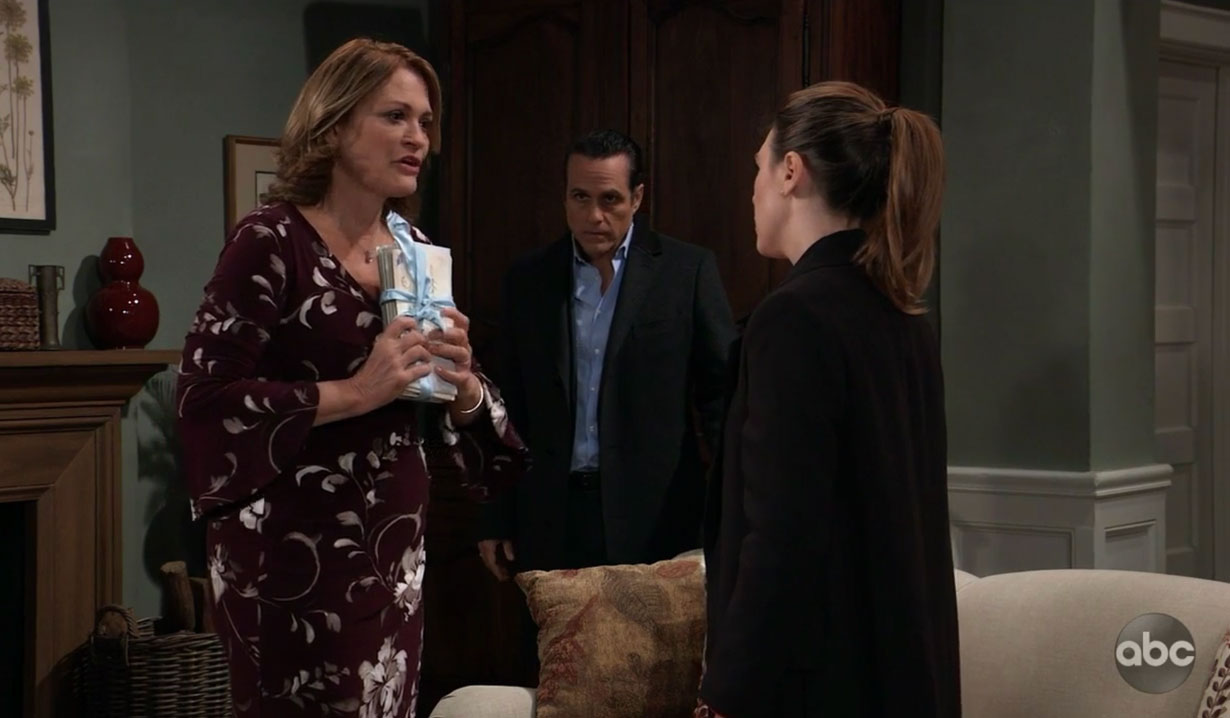 At Jeanette’s, Margaux storms in and prevents her mother from burning her letters to Joe Scully. She demands the truth and snatches the letters. Margaux reads them out loud, and in them Jeanette writes she would do anything to be with Joe.

Jeanette cries that she never loved Margaux’s father, and he was the only thing keeping her from being happy with Joe. She admits she couldn’t stop thinking about wanting her husband gone, wanting him dead. Margaux has Sonny reveal he’s wearing a wire, which shocks Jeanette. Sonny wonders why Jeanette was never with Scully after it all went down. He suspects Scully picked some naive mark to do the dirty work and was hoping when Vincent’s body was found the mark would go down and it would be safe for them to be together. Margaux realizes the plan failed because the body wasn’t found. Margaux chases her mother out of their family home and knows she can’t nail Sonny for her father’s murder. She pours herself a drink, and collapses in tears with the letters. Later, Sonny calls Carly and leaves her a message explaining he won’t be home tonight because something came up. Sonny helps a drunk Margaux off the floor and to the couch. He covers her with a blanket. Sonny sits in a nearby chair and reflects.

More: Elizabeth Hendrickson on past soap roles and the future.

At Charlie’s, Sasha tells Nina hasn’t been able to find a job. Nina offers Sasha a job and she eventually accepts.

At Kiki’s place, Kiki and Griffin share some champagne and kiss. They both hope he will get good news from GH on his job. Things quickly escalate to the bedroom and sex.

Liz continued to worry to Franco about Aiden when Terry drops by her place with some root beer and moon pies. Liz explains to Franco as kids when one had an issue they’d talk to one another while drowning their sorrows in sugar. Franco leaves them to talk. Liz opens up about her issues with Aiden, and Terry talks about how not being able to cure Oscar has her feel like she’s failing him and his family. Liz is grateful Aiden’s problem is nowhere near Oscar’s, but she doesn’t know what is even wrong with her son.

At the PCPD, Diane arrives as Jordan and Chase question Carly as to how her hairs got in Mary Pat’s hand. Diane thinks it is their job to answer that question. Chase and Jordan don’t believe Carly did this, but suggest Sonny could have hired someone capable of it. Diane points out Sonny is accused of making people disappear, not reappear dead. Carly suggests Ava also had the means to do this and frame her. They admit Ava is being looked at too, and inform Carly she’s free to go.

In Kevin’s office at GH, Ryan adds Mary Pat to his list of victims and puts it in a drawer with various women’s licenses, mementoes from his killings. Ava drops by for a session, and they get to work. She has discovered by channeling her anger she can find a way to forgive Kiki, but not Griffin. She assumes once Kiki realizes what it’s like to be hurt by Griffin then she can forgive her. She admits having nudged things along to set it up so that Griffin cheats on Kiki. Ryan asks how she can be sure he will. Ava states since he’s cheated on her and the church it seems to be in his nature to cheat. Ryan’s stares at her as she rants, and she notes the way he is looking at her and thinks she’s scared him. He reveals he thought he could do this, but he can’t treat her anymore. She is convinced he thinks she is horrible, but he reveals he finds her fascinating and even identifies with her. He feels he is unable to be objective with her and wishes her luck with everything.

Franco walks into Charlie’s and Nina calls him over to introduce her long-lost, newly discovered daughter Sasha. Franco is stunned, and Nina gives him the short version of the story. Sasha decides to call it a night seeing she has a new job to start in the morning. Franco joins Nina and is thrilled for her. Nina feels lucky to have the chance to know her daughter, who is remarkable. They both admit they are happy, and Nina fears she’ll screw it up.

Sasha returns home and runs into a shirtless Griffin in the living room. He had come out for a drink, and she holds a glass of water to his face and comments he looks a little flush. Kiki walks out and finds Sasha offering Griffin some of her water. Sasha goes to bed, and Kiki is disgusted that Sasha was hitting on Griffin right in front of her.

Sonny contemplates how his life could have played out differently.

Sonny Pushes for a Confession From...