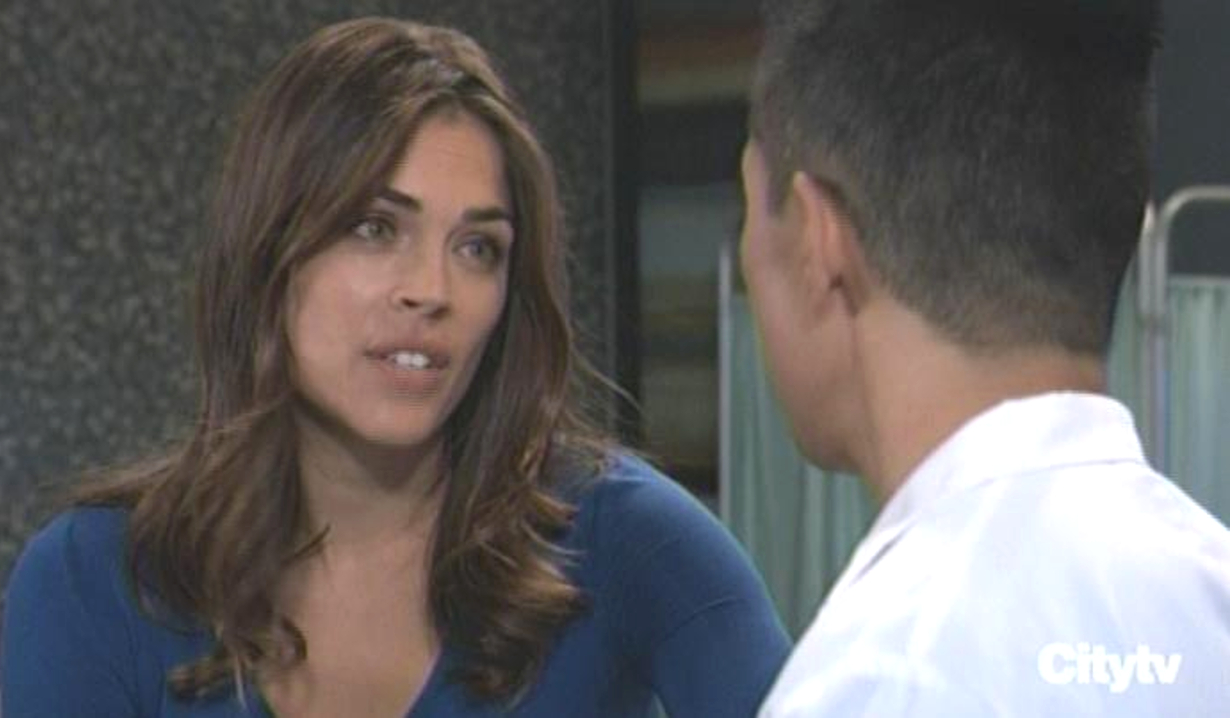 At Ferncliff, Ryan makes sure that extra security has been given to his patient.

At the Corinthos compound, Carly is surprised when Jason explains that he’s asked Curtis and Sam to look into the situation at Ferncliff. They wonder if Mary Pat might have been bumped off to keep the mystery patient under wraps. Carly doesn’t want them to risk prison to satisfy her curiosity. Curtis, Sam, and Jason insist on putting this to rest.

Spencer and Laura are outside of Kelly’s. It’s getting cold, but he refuses to go inside since Valentin’s ex-wife is there. Laura tells him how much his father loved sunsets in the falls. He really misses his dad. They hug. After they discuss the election tampering, she explains she has sad news about Kevin. He already knows and tells her not to make excuses for the man who hurt her. She’s his rock and he’s confident she can be the rock for Port Charles too.

Inside, Maxie is thrilled when Nina gives her shoes. Maxie admits she didn’t spend her birthday alone. Peter was there. This worries Nina, but Maxie calms her concerns and turns the tables, questioning her about what she did last night. Nina concedes that she was stuck on Spoon Island last night. She adds they need to stay away from ‘toxic men’. “What if we don’t want to?” Maxie wonders. She insists that she and Peter are just friends. Nina has an idea of how to get out of this.

At the hospital, Britt gets Brad to explain what’s wrong. He blurts out that Wiley isn’t his son and not just because he was adopted. He’s Michael’s son. Brad feels like scum. Britt’s never seen him feel shame. She reminds him that he helped her steal an embryo and asks him about the mother. He fills her in about Nelle. “Geeze, that beats anything I’ve ever done,” she says. Brad is sick with fear and terrified his life will explode. She advises him to ‘man up’ and not let his guilt get to him and the kid is meant to be his. Better with him than in the Corinthos family and the violence that surrounds it. That rationalization seems to work for Brad and they hug.

Down the hall, Michael bumps into Bobbie. They talk about Brad and Lucas. She explains she’s discovered something troubling. With some reluctance, she hands him the spoon he gave Brad and Lucas that was originally for Jonah. She assumes he didn’t mean to give it away, but he did. Now that time has passed, however, he’s happy to have it again. Bobbie says he can talk to her any time. He tells her he’s been doing group therapy and that makes her proud. She points out that a nurse, Francesca, who he once took to dinner, has been asking about him. Carly shows up and they discuss her recent trauma. By the elevators, Spencer leaves his grandmother alone as Ryan arrives. She tells him there has been a third person in their relationship: his brother. She thinks he needs help dealing with the legacy of Ryan. After Laura asks him to move out immediately, Carly shows up and announces she’s dealing with her concerns regarding her old neighbor in Ferncliff. This worries him and she won’t explain. Meanwhile, Brad finds Spencer at a vending machine and brings him to see Britt. That’s nice for both of them. They talk about his father and wish things had been different.

Lulu and Peter go to Charlie’s where they talk about the news. She worries that her pieces about Ryan may have inspired Mary Pat’s decapitation. He tries to be reassuring and explains that the paper is endorsing her mom. They discuss Britt’s release and she vents about how inhuman his half-sister is. Nina calls and asks him to be her date to Curtis’ wedding.

Curtis sneaks around Ferncliff when a nurse finds him. He claims he’s from Coyle Protection and was sent by the state to test security. He points out how easy it was to get in and how many orderlies were asleep. She checks his credentials and he asks to see security protocols. When she leaves to check on a staff member, he starts to dig around. Down the hall, Jason and Sam find Carly’s old room. He notices there are new locks on the doors and asks if she can get them inside. Once Curtis has shut off the alarm from the office, Sam and Jason open the door and are surprised by what they see.

Sonny Pushes for a Confession From...