Tuesday November 6, 2018: Britt and Brad are reunited, Lucas reaches out to Julian, and the election has to be rescheduled. 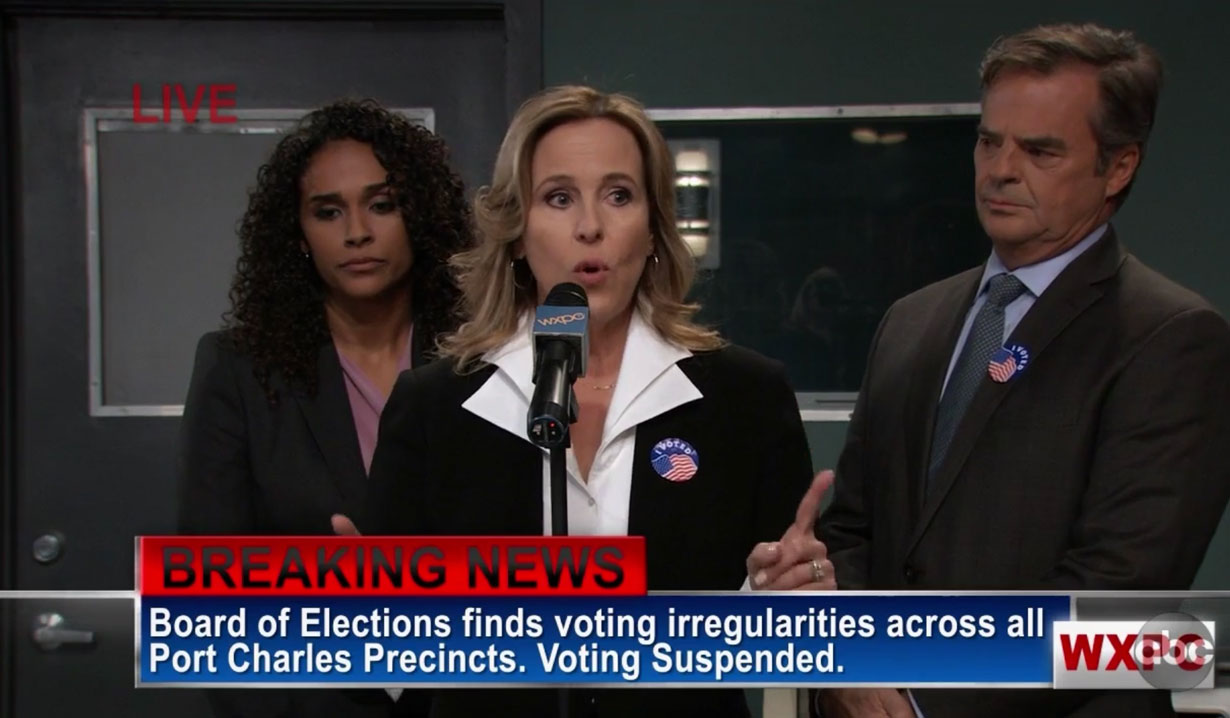 Lulu, Spencer and Laura return to Laura’s apartment after voting. Lulu has to leave to pick up Charlotte, and later Ned arrives and invites Laura to his victory party at the Metro Court.

He says they both know she got into the game too late to win, but he would like her to join his administration. Spencer warns it is a trap.

At the polls, Curtis writes Laura’s name on his ballot and places it in the machine. His ballot is spit back out with smiley faces printed on it. The official explains this has happened with multiple ballots today.

At the PCPD, Jordan and Anna briefly discuss her plan to use Britt to catch Obrecht. Later, Curtis stops by to report an issue with ballots not registering at the polls. Jordan makes some calls and learns the issue is widespread. She calls Ned, who indicates he’s at Laura’s, and asks them both to come into the PCPD because there has been election tampering.

Finn brings Britt to GH. Britt changes into a hospital gown, and Finn explains she has to play the part of a sick patient if she wants this to work and stay out of Pentonville. Anna arrives as Finn injects Britt with the common cold virus, which Britt doubts will fool her mother.

Outside of Kelly’s, Chase finds Willow grading papers and nervously tries to flirt with her. He also warns her to be careful out on her own in the aftermath of the murder, and if she sees something to say something. He hands her his personal number and indicates he’s the lead detective on the case.

At Charlie’s, Brad and Lucas chat with Michael, who holds Wiley. Brad is paged and has to report to work. He runs into Julian outside and has a panic attack about the truth eventually coming out. Julian tries to calm him down, and then heads inside. Michael asks Lucas if he’s reconsidered letting Julian be a part of Wiley’s life. Lucas explains he made an agreement with the birthmother that Julian would not be involved. Michael thinks about Jonah and how if he survived that he couldn’t imagine being kept from his son. Later, Julian speaks with Lucas about perhaps spending more time with Brad because he is falling apart. Lucas thinks Julian is vying to get closer to Wiley and reminds his dad he can’t be a part of the boy’s life. However, he thinks Julian can be a part of his. Julian is thankful for another chance with his son and assures Lucas he’ll always be there for him.

Brad arrives at GH and is reunited with Britt. Finn and Anna fill him in on their plan, and they need him to run the tests Finn orders. Brad reluctantly agrees only to help Britt. Later in the halls, Chase bumps into Finn and Anna and he tells them the latest on the murder case. Anna realizes Jordan will likely need a profiler to help catch the killer and she knows just the person. Meanwhile, Britt notices something seems to be eating Brad and orders him to spill it. He blurts out, “Wiley isn’t my son!”

Outside of Kelly’s, Lulu and Charlotte spot Chase and Willow. Willow heads inside after saying hello to them, and Lulu sends Charlotte in to get a scone. Alone, Lulu grills Chase as to whether he asked Willow out. He hasn’t, and Lulu suggests he hurry before someone else snags her. Inside, Michael runs into Willow and they smile at one another. Lulu enters and finds Michael with Willow and wonders if Charlotte introduced them. She hadn’t, so Lulu introduces Michael and Willow. Lulu receives a message that there is a story brewing at the PCPD and she has to run. Willow thanks Michael for not mentioning where they met to Lulu. They talk about the grief support group and admit to finding it hard to talk about their loss with strangers.

At the PCPD, Jordan and Curtis fill Ned and Laura in on the hacking that has halted the election. Lulu arrives with Charlotte, and Spencer who is with Laura pounces on the girl. He promises her that once their grandmother is mayor she will evict her and Valentin from town. Jordan, Laura and Ned hold a press conference and explain the election has been suspended due to tampering and will be rescheduled. Jordan vows not to rest until she finds the party responsible and see them prosecuted to the fullest extent of the law. Laura and Ned echo her sentiments to bring the culprit to justice as Spencer nervously watches on.

Michael wonders what got Bobbie so raddled at Brad and Lucas’ party.

Brad rants to Britt that this will destroy his life.

Jason tells Carly this will be worth it if it will help her put Ferncliff behind her.

Laura confronts Kevin about a third person in their marriage and she has her suspicions as to who it is.

Sonny Tells Margaux Her Mother Was...

Jason and Sam Make a Startling...