Sonny Tells Margaux Her Mother Was Involved With Scully

Monday November 5, 2018: Spencer tampers with a polling computer on election day, Sonny meets with Margaux, and Jason offers to help Carly with the Ferncliff mystery. 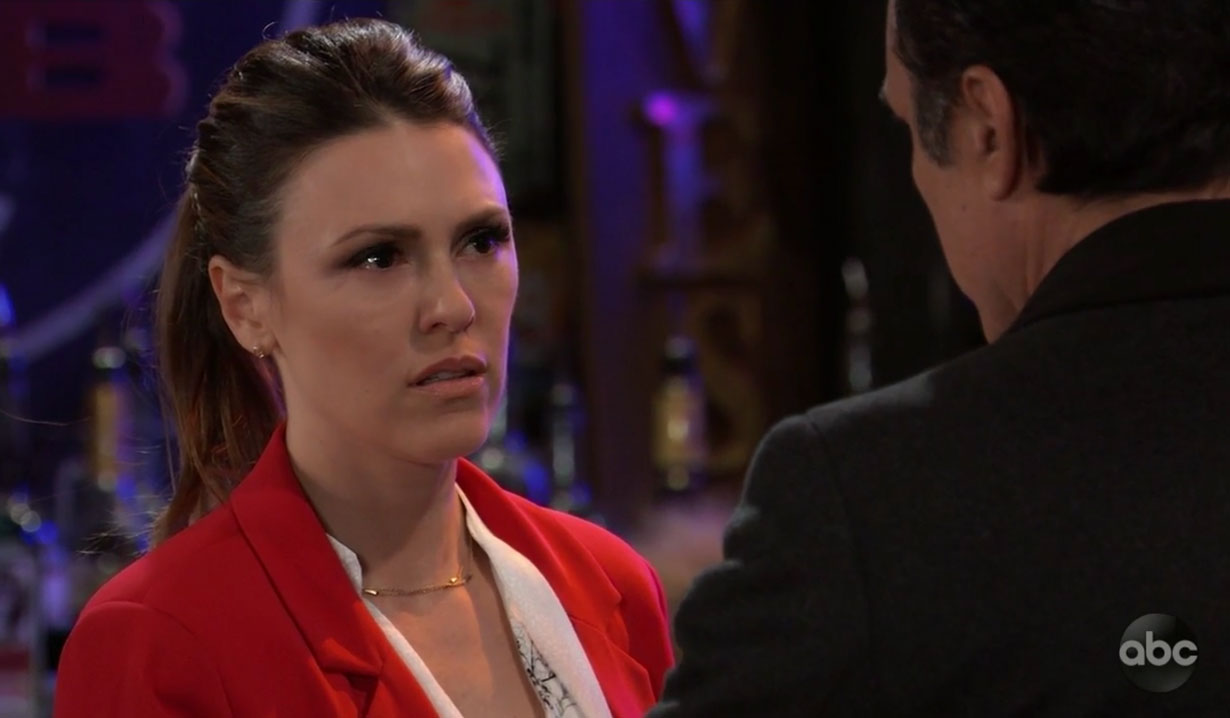 Carly arrives at Jason’s the day after Mary Pat’s murder. Carly hated the woman, but remarks whoever did that to her was a monster. She also knows Mary Pat was just one rotten cog in the twisted machine that is Ferncliff, and there is a mystery there she is determined to solve involving her neighbor.

Jason suggests this patient could be as dangerous as Kevin says. Carly still wants answers and worries that patient may not belong there just like she didn’t. Jason offers to help her find out what happened to the patient.

Curtis stops by the PCPD with wedding planning materials. Jordan forgot they had planned to meet and asks for his help with the Mary Pat case. She fills him in on the evidence, including the blond hair the victim was clutching, which she’s waiting to see if there is a DNA match in the system. Curtis suggests the gruesome scene was staged to make it look like a maniac did it when the motive may have been more personal. Jordan gets the medical examiner’s report, which indicates the victim’s heart was pierced and she was dead before her head was severed, which was expertly done.

At the gallery, Ava hears someone approaching and arms herself with a statue but is relieved it’s only “Kevin.” He stopped by after hearing the horrible news about the body and wanted to check on her. They talk about the gruesome discovery, and Ava suggests they get out of this place because she wants to be around people, laughter and life.

At home, Laura reflects on “Kevin” asking her for a separation. Spencer asks his grandma if she’s ready to become the next mayor of Port Charles, but she’s not sure she’ll win entering the race as late as she did. Lulu stops by with “Laura for mayor” buttons for all, and senses something is troubling her mother. Lulu sends Spencer to check on the exit polls, and Laura tells Lulu that Kevin left her because he doesn’t feel the same way about them anymore. Lulu is furious, and Laura cries that she doesn’t understand how he changed so quickly because she never sensed anything was wrong until she came home. Lulu advises her mom not to worry about figuring out Kevin’s issues and focus on getting elected today. Spencer returns and reveals the exit polls are turning in her favor, but Laura still thinks her chance of winning is slim. Lulu believes in her mother and suggests they head to the polls. Spencer grabs a thumb drive from his laptop, eyes it, and heads out with them.

At the Floating Rib, Margaux takes notes on the scene and thinks she should contact Sonny. Sonny enters and swears he had nothing to do with this. She promises to get the person who did this, because she always gets the bad guy no matter how long it takes, including the person who killed her father. Sonny warns her if she keeps pushing for the truth about her father then she will be the one who gets hurt. Margaux doubts that, so Sonny decides to give her the truth. He reveals he knows her mother from back in the day and believes she was involved with Scully. Margaux tries to slap Sonny for disrespecting her mother, but he stops her. He tells her that Jeanette visited Scully at the club often, and she was more than a girlfriend. Sonny states that her father wasn’t killed trying to get out of the mob, her mother wanted to be a widow. Margaux calls him a liar, but he has the proof her mother conspired with Scully to kill her father.

“Kevin” and Ava stop at Charlie’s for a drink. Laura, Lulu and Spencer arrive for coffee before going to the polls and see Ava with “Kevin.” Laura decides she doesn’t need coffee and walks out, followed by Lulu. Spencer approaches Kevin to give him a piece of his mind for hurting his grandma. He accuses him of having no loyalty and no soul and he thinks “Kevin” and Ava deserve one another because they are two of a kind. Spencer storms off, and Ava wonders what that was about. “Kevin” explains that he and Laura have separated Ava is sorry. However, Ava takes Spencer’s insult as a compliment because she’s glad to have found a kindred spirit.

Laura, Lulu and Spencer head to the polls, and Spencer quickly inserts his thumb drive into one of the computers there. Laura and Lulu cast their votes.

Britt gets a checkup at GH and says she feels perfectly healthy. Finn tells her, “Not for long.”

Curtis discovers something at the polling place near the computers.

Michael holds Wiley and asks, “Have you reconsidered?”

Laura meets with Ned, and Spencer advises his grandmother that this is a Quartermaine trap.

Chase advises a smiling Willow that he could arrest her.