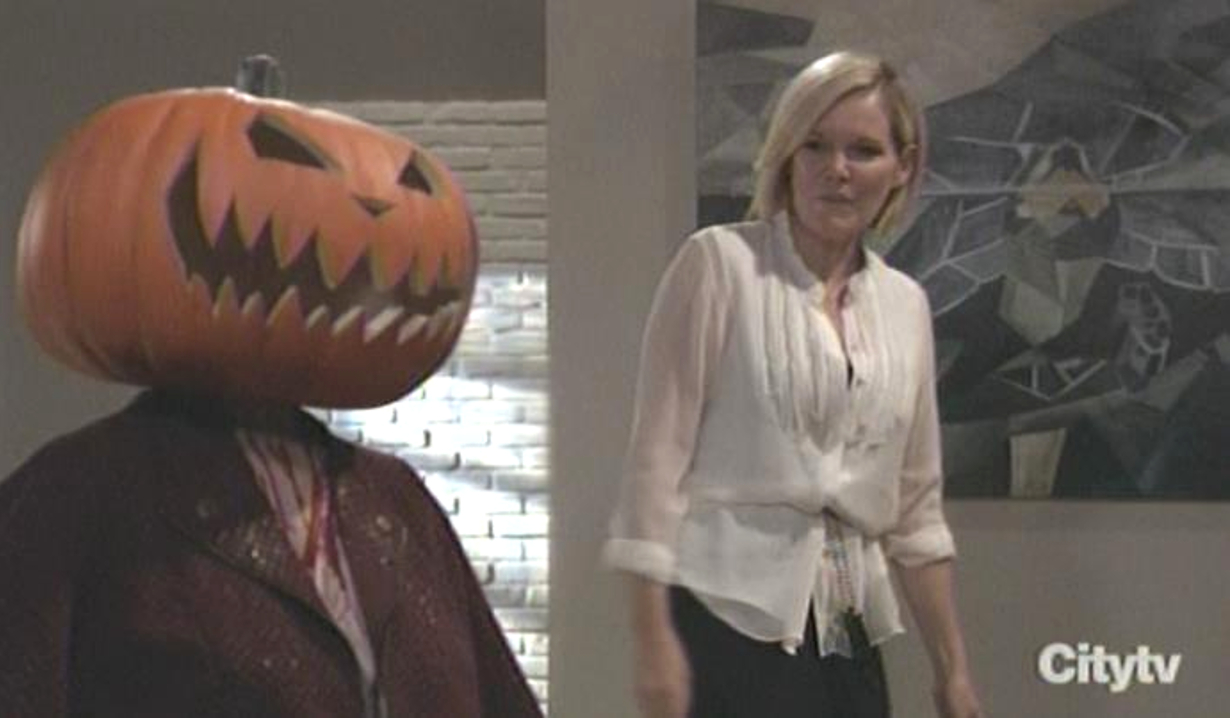 Scott joins Ava for coffee at Kelly’s and apologizes for putting salt in her wounds from Kiki and Griffin. She tells him Kevin is helping her heal. He’s enlightening and exciting. The doctor is helping her explore her impulses. “Oh boy!” groans Scott. Ava tells him she was misguided to seek redemption. This worries him. She explains how understanding her doctor is and assures Scott she won’t act on her violent impulses.

Carly dreams of Mary Pat’s head in the apple barrel and wakes up sighing in her bed. Sonny rushes in to comfort her. She recaps finding the head. She’s not sorry Mary pat is dead. Sonny advises her not to say that to the cops.

aura arrives at The Floating Rib while the cops are digging for evidence. She feels awful, but Mac assures her this wasn’t her fault. She needs her husband. Kevin hasn’t been calling her back. Jordan and Chase ask her about the dead nurse. Laura is clueless about who could have done this. Ryan arrives and gives her a hug. He claims he just heard the news and offers to call her a car. Ryan has to give a statement to the commissioner since he saw the victim recently. She sticks around as he talks to Chase and Jordan. He tells the cops that Mary Pat was frightened of Carly and points out that Carly threatened the nurse’s life. Laura is forced to confirm this. Ryan adds it wasn’t the first time Carly threatened her. Laura defends Carly’s anger. After the cops finish with him, Ryan tells Laura to get some rest and exits. She rushes out almost immediately. Chase asks Jordan what that was all about. Mac looks over the surveillance footage and it confirms that Kevin and the nurse were there. Sonny and Carly arrive. She makes her statement about finding the head. Jordan asks about her recent run-ins with the dead woman. Carly says she’s not sorry she’s dead, but she didn’t kill her. The cop wonders if someone close to her did. Sonny accuses her of fishing. Later, Scott drops in to see if anyone needs a lawyer. Mac asks him why he co-operated with the documentary crew.

Valentin wakes Nina at Wyndemere with breakfast on a silver platter. Charlotte has already gone to school. He says he didn’t sleep much. She asks him not to make a big deal of their kiss. Nina requests that he let her leave in peace. He agrees, but he’s not giving up on her.

On the pier, Sasha and Kiki do their stretches as Griffin says they need to start running. Kiki takes the lead and they jog after. After going around the harbor, they stop and Sasha has a cramp so Griffin helps her with it. Once he loosens her up, Nina pops up and they wonder if she’s on the ‘walk of shame’. Nina insists there’s nothing going on and she just couldn’t return last night. Sasha tells her friends they can jog home. Nina’s impressed her daughter is bonding with Kiki. As they chat, Sasha admits she ‘not disinterested’ in Griffin and says that he’s not serious about Kiki. Ava told her that. Nina warns her not to trust Ava.

Griffin and Kiki go to Kelly’s. He tells her Sasha is cool. Kiki likes having a ‘surprise sister’. He gets her to open up about her mom. She misses the ‘idea’ of her mom but not the real thing. Griffin points out that he’s the problem between them. She just wants to focus on the positive.

When Ava gets to the gallery, she finds a jack o’lantern on top of Mary Pat’s torso sitting at her desk. Nina storms in, ranting about Sasha until she spots the decapitated body. They call the cops. Chase arrives with some officers and starts questioning Jerome. She has no idea how this happened. The cop narrows his eyes. Jordan arrives as Chase discovers blonde hairs in the corpse’s hand.

Sasha visits Wyndemere and catches up with Valentin about what happened last night. He thinks she should go back to where she came from. If she sticks around, the truth will come out. She insists she won’t blow this and no one will find out she’s not Nina’s daughter.

Ryan goes down to the pier and shoves a meat hook behind a crate. Laura pops up and asks why he isn’t at work. She demands to know what’s going on. He admits that he’s been avoiding her because he’s been re-evaluating his life. He’s realized that his feelings for her have changed. “I think we should separate,” he explains. She sobs. He says it’s no one’s fault. She thinks they can work on this, but he doesn’t have the will to try. She assumes there must be someone else. He makes excuses and announces he’s moving out today.

A Shocking Sight Ruins the Halloween...

Sonny Tells Margaux Her Mother Was...