Thursday November 1, 2018: Drew asks Oscar to take a trip, Cameron finds something on the pier, and Nina does her best to resist Valentin. 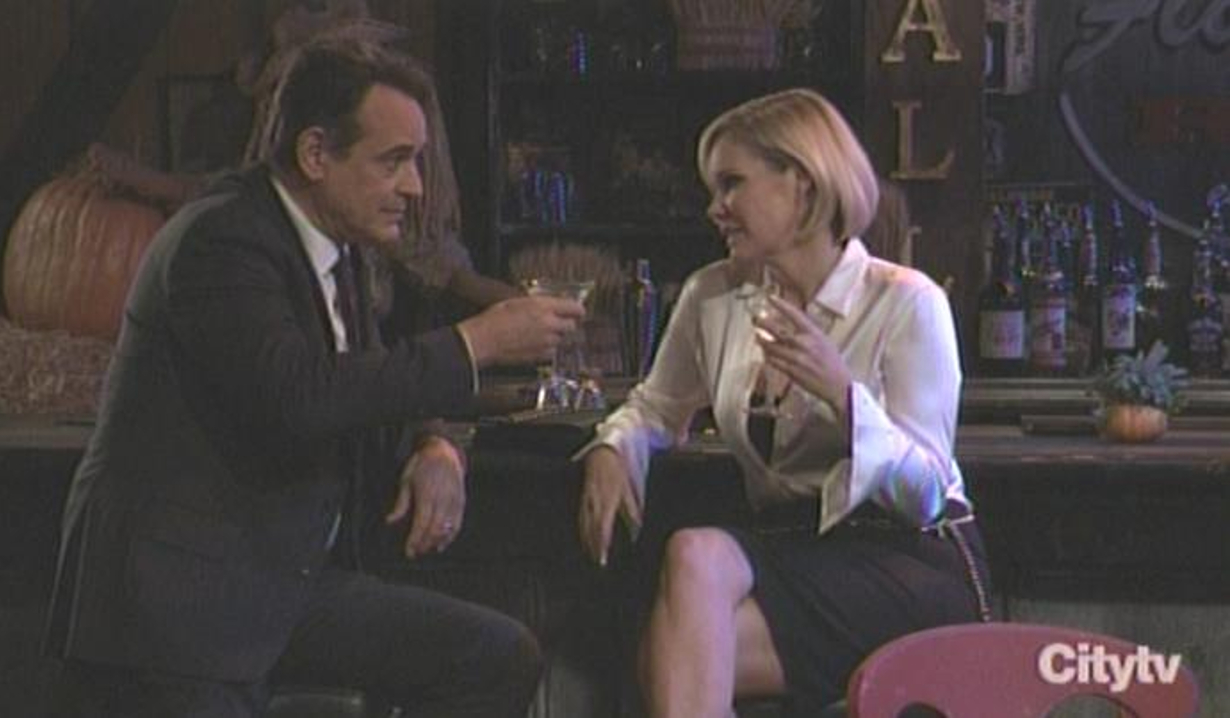 At The Floating Rib, Michael talks to Carly. He tells her that he’s been attending group sessions at the hospital. When he goes off to get a drink, Ava pokes over and starts digging at Carly, reminding her about Sonny killing AJ. Carly reminds her about framing Connie. She dredges up Morgan again and threatens her before storming off. Mac arrives with costumes and asks Ryan if he wants to resurrect Norma and Eve. Ryan says cross-dressing is no longer appropriate in today’s political climate. He’s distracted by Ava. Jordan and Chase arrive and chat with Laura about her mayoral race. They head for the bar as Alexis shows up. Laura notices she’s wearing the watch that Mikkos gave her mother. She warns that any gift from a Cassadine comes with a hidden cost. Lulu shows up and tells her mom how much buzz there is around her campaign. Laura doesn’t want to think about the election. Ned arrives, shaking hands by the door. He walks over to talk to Laura and then makes a public declaration about how he wants to refocus the political conversation on social services. Carly complains about Ferncliff. Ryan points out it’s run by the state and Ned suggests that Laura and Carly work on a review of the institution. Alexis points out that the latest poll has Laura surging. Ryan says a lot could happen in the next few days, or even tonight. Moments later, Carly corners him to thank him for all his help when she was in Ferncliff. She asks about the patient next door to her and he snaps, advising her to back off. He apologizes and warns the patient is dangerous. Ryan joins Ava at the bar. She’s sure he’s heard all about her sins. He claims he believes in personal responsibility and Morgan’s death wasn’t her fault. Chase wanders outside and sits on a haystack with Michael, who admits that he’s been thinking about Jonah a lot. He wonders what could have happened if Nelle gave birth in a hospital. Chase tells him not to dwell on it and beats himself up for prolonging the misery Nelle caused. Back inside, the games begin. Ryan makes an excuse and heads for the door. When Carly is about to bob for an apple, Mary Pat’s head floats to the surface of the barrel. On the pier, Joss is dressed as Princess Leia and Cameron is dressed as Han Solo. As they bicker about their costumes, she flashes back to spending last Halloween with Oscar. They talk about how to publicize their fake relationship until he starts shooting her with silly string. After some laughs, they flirt and snap a selfie. They share an awkward moment and then he spots Mary Pat’s ID card. Drew stops by Charlie’s Pub to see Oscar as he cleans tables. Drew tells him how much Kim is freaking out about him and everyone misses him. Oscar explains that he’s found some nice people to live with. His father informs him that the trial starts on December first and asks if he wants to hit the road before it starts. Drew suggests they take a road trip to Florida, but Oscar’s not interested. He accuses him of trying to ruin his case, but his father insists that he just wants to spend time with him. He’s not ready to let him go. Oscar apologizes but he won’t go. Julian visits Kim at the hospital. He tells her he couldn’t convince Alexis to drop Oscar’s case. When he explains that the lawyer thinks that Oscar should have a say in his treatment, Kim accuses him of agreeing with his ex. He insists that’s not the case but wonders if fighting with her son for what might be his final months is a good idea. Julian brings up the issue of quality of life, but she won’t listen. He says he’ll support whatever she does. She wonders if Joss can get through to her son. At Wyndemere, Nina insists the storm isn’t bad and it’s time for her to head back to town. The power goes out. Valentin lights candles and pours her some wine as she sits by the fire. They remember spending nights by the fire before and he asks what she wants for breakfast. She accuses him of bamboozling her. He insists he doesn’t control the weather and repeats that he loves her. Valentin says he’ll never give up the hope he can convince her to come back. They kiss. She backs off and says that was a mistake. He says it was fate and asks if his hopes are unfounded. Nina is sure that he will hurt her if she lets him back into her life and she won’t let that happen. He gets choked up and leaves to prepare a guest room for her. When he returns, she’s asleep on the couch. He puts a blanket on her.

Posted 17 seconds ago
Posted on: Variety

Posted 43 mins ago
Posted on: TVLine