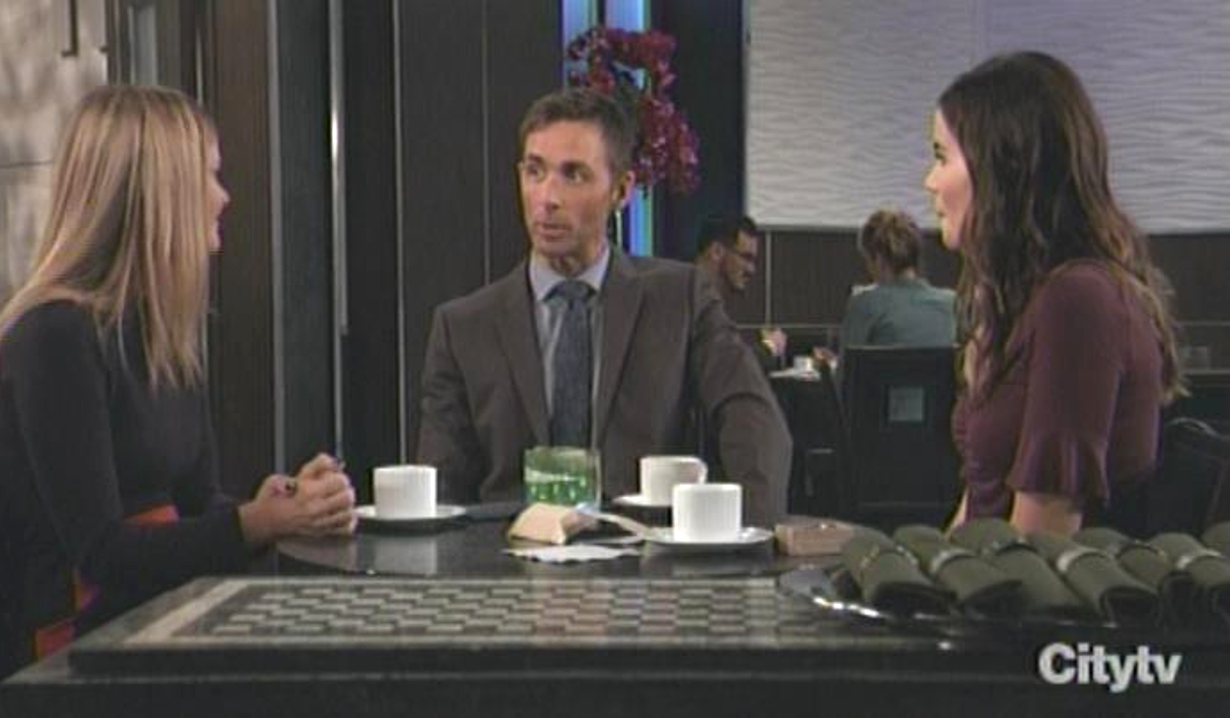 A frazzled Finn heads back to his room and feeds Roxy. He complains about what a hard night he had in surgery. Anna comes out and climbs into bed with him. He’s startled that she’s back, but she’d rather have sex than explain. After sex, he asks about Obrecht. She didn’t find her and she missed Finn so she came home. She suspects that Obrecht has a load of hiding places she can be. Anna asks him to keep her occupied while she waits. When the WSB gets a location on Obrecht, she wants to take Finn as her back-up.

More: Murderous rampages that creeped us out in soaps Sasha and Nina are having coffee at the Metro Court. Nina gives her an amethyst as a memento of their time together. Sasha spots Valentin across the room and Maxie rushes in to remind her boss that she missed a board meeting. Nina asks her to join them and Sasha asks about James. Maxie realizes they are cousins and starts babbling about Nathan’s criminal family. Nina admits that the family also has mental illness problems. Sasha assures them there’s been no mayhem in her life. Maxie walks off. Across the room, Peter asks Valentin about Sasha. They talk about Peter’s relationship with Anna. Peter thinks Valentin has a long road to travel if he’s looking for Nina to forgive him for what he did. As Peter heads to the elevator, he bumps into Maxie and they chat about going to the hospital. The topic turns to Halloween and he admits that this will be his first. She asks him to go costume shopping with her. Back across the room, Nina invites Valentin over to her table. They discuss Sasha’s work situation. She’s a temp but has no position at the moment. Nina offers a place at Crimson, but Sasha can’t accept. Nina suggests she ask Peter for a job so she can make Port Charles her home. Valentin suggests she stick around; she could meet Charlotte and see another side of Nina. Sasha leaves to make a call to her temp agency and Nina thanks Valentin for his help. He asks her and Sasha over to dinner and tells her how radiant she looks. She accepts. Oscar bursts into Alexis’ office and tells her that he’s got a job. She congratulates him and suggests he get a place to live next. As he heads for the door, Julian arrives. Oscar guesses his mom sent Jerome. Julian admits it, but he’s not rescinding his job offer. After Oscar exits, Julian explains the situation to the lawyer. She assures Julian that she doesn’t want to add to Kim and Drew’s pain, but she thinks over time they will be able to reconcile what they want with what Oscar does. They debate the situation. He understands why she’s doing this but doesn’t see anything good coming for this. She thinks Oscar will make the right decision if he feels like it is his choice. He wishes Kim knew her like he did. Julian trusts her judgement but hopes she acts fast. At Charlie’s, Sonny interrupts Margaux chatting to Kristina at the bar. He warns her that the DA is gunning for her father. Kristina tells the DA to take a table. Once she walks off, Sonny and Kristina debate her working for Julian. He thinks this place attracts a bad crowd. He misses her. She claims she’s fine and he tells her how important family is and he’ll always be there for her. Once he leaves, Daisy comes over and chats with her, telling her there’s a bonfire coming up. She asks Kristina to go with her. Oscar arrives on the phone, telling someone how desperate he is for an affordable place to sleep. He interrupts Daisy and Kristina and asks her to teach him be a busboy. He tells her about his legal situation and how hard it is to find a place to live. When Kristina goes to get some paperwork, Daisy offers to help Oscar with a place to live. There’s a bed at her place if he needs it. He’s thrilled. Kristina returns and makes a date with Daisy. Spinelli meets Sam and Jason at the penthouse. He hopes that they are working toward a reunion. They lecture him about matchmaking and he promises to restrain himself. Spinelli announces he has some intriguing information on Margaux. Her father had a substantial life insurance policy that her mother never collected. Sam thinks she probably couldn’t handle admitting her husband was dead. She explains that she was forced to face the fact that Jason might never come home. Everyone wanted her to get closure, but they were wrong. Spinelli suggests she’s projecting, and the feelings of the widow Moreno couldn’t possible compare to her feelings for Stone Cold. Sonny arrives and says he caught the DA with Kristina and that crossed a line. Spinelli explains that Moreno’s widow filed a life insurance claim once the body was unearthed, but the insurance company has launched an investigation.

Kim Asks Julian to Use His Romantic...

Sam and Spinelli Go Undercover to...