Ryan Suggests Laura Run for Mayor, After Fantasizing About Murdering Her

Tuesday October 23, 2018: Ryan has a terrible fantasy, Kiki meets her new half sister, and Griffin is eye candy for Sasha. 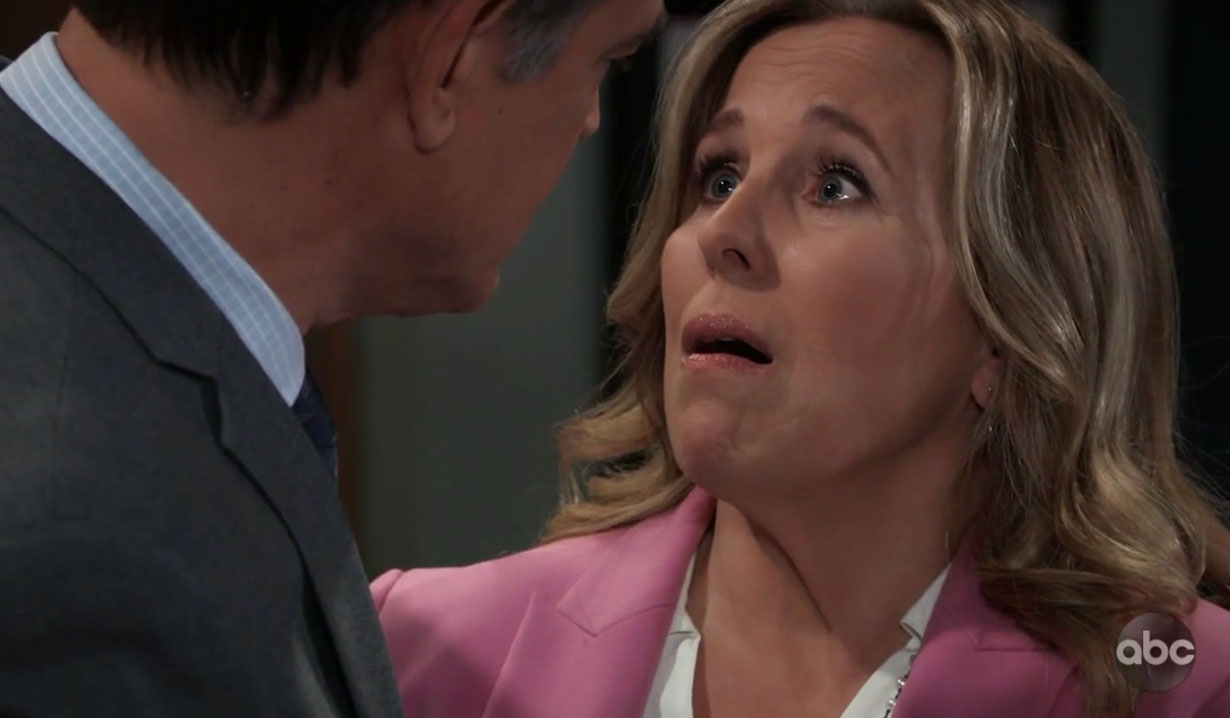 Jason arrives at Sam’s with Kristina, who he found getting drunk in the park. Kristina slurs she was contemplating her pattern of bad decisions and notes Sam is making one by not getting back with hunky Jason. Sam orders her sister to go upstairs and shower, and she apologizes to Jason. Jason leaves, and Sam has a talk with her sister about her actions. Kristina admits she feels stuck.

In the park, Liz can’t stop worrying about Aiden. Franco promises that they will help Aiden through his issues together.

Outside of Charlie’s, Alexis offers to represent Oscar. She tells him he needs to get his life in order, which means finding a place to live and a way to pay for it. Oscar heads inside and lets his parents know he is taking them to court to be emancipated. Drew spots Alexis in the background and asks if she put this idea in his head. Oscar admits Alexis is his lawyer. Franco and Liz walk in as a furious Kim slaps Alexis. Kim can’t believe Alexis, who is a mother, would stand in the way of her trying to save her son. Alexis and Oscar leave, and Drew, Liz and Franco try and keep Kim calm. Kim rushes out in tears.

At the Metro Court bar, Ava stews when Griffin and Kiki walk in. She confronts them and ponders how long before one of them cheats on the other. Elsewhere, Nina meets with Sasha as Valentin arrives. He is glad they are getting along. He leaves them, and Nina spots Kiki and calls her over. Kiki and Griffin are glad to have a reason to walk away from Ava, and Nina introduces Kiki to her sister. Griffin and Nina give the sisters time alone to talk. Ava is shocked to learn Sasha is Nina’s daughter with Silas who survived Madeline’s attempt on her life. Meanwhile, Kiki offers to show Sasha around Port Charles, and Sasha says she would love to find a place where she could kick back and get into some trouble. At the bar, Griffin tries to convince Ava to make amends with Kiki before their relationship is permanently broken. He walks over to check on Kiki and Sasha, and Kiki introduces Griffin to her sister. Sasha seems interested in Griffin and realizes they are out together and urges them to go have fun and she’ll meet with Kiki tomorrow. Ava watches the interactions from afar and notices how Sasha looks at Griffin. She thinks she can work with this.

At GH, Ryan discovers Laura in his office with his list of victims. She asks if they are Ryan’s victims. He admits they are. She is worried about him and thinks he needs to talk to someone. Ryan doesn’t need help and calls her a worrying nag just like his mother. Ryan grabs a letter opener from his desk and stabs Laura in the stomach, which is just how he killed his own mother. As she realizes he’s not Kevin, Liz walks in and screams. Ryan stirs from his fantasy as Laura continues to question him about the list. He claims they are people Ryan hurt. She points out he’s left off some people, such as Steve and Audrey Hardy. He thinks they should have them for dinner. She reminds him that Steve is dead. He covers and explains he’s just been so wrapped up in the coverage of Ryan, and Steve’s presence is always here at GH. Ned stops by to talk to “Kevin” about the coverage of Ryan’s crime spree, which he thinks is bad publicity for Port Charles. Ryan says he can’t do anything to stop it, and even Lulu is writing about it. Laura realizes Ned’s special term as mayor is about to come to an end and wonders why he isn’t working on a re-election campaign. Ned points out he’s unopposed. Ryan suggests Laura could run against him, but Ned reveals it’s too late for her name to be put on the ballot. Ned leaves, and Ryan pushes Laura to mount a write-in campaign for mayor.

More: Weekly recap for every soap

Jason finds Kim at a coffee shop. She asks him if he has any influence over Alexis. Jason notes Alexis doesn’t much approve of him. Kim worries if Alexis doesn’t back down that she’ll kill her son.

Alexis and Oscar talk at Alexis’ office. She warns him that his mother will fight for him and he needs to prepare. She also needs him to think about where he will stay in the meantime. Oscar has an idea.

Olivia brings Leo to see Julian, and warns him not to blow this good thing he has going.

Drew tells Curtis he can’t be his best man.

Oscar asks Cam why he’s spending so much time with Joss.

Kim turns to Sam for help.

Carly wants to make sure she and Liz are on the same page.

Laura tells Alexis she may run for mayor again.

Kim Asks Julian to Use His Romantic...