Friday October 19, 2018: Drew refuses to help Margaux, TJ tries to talk Stella around, and Maxie panics about her baby. 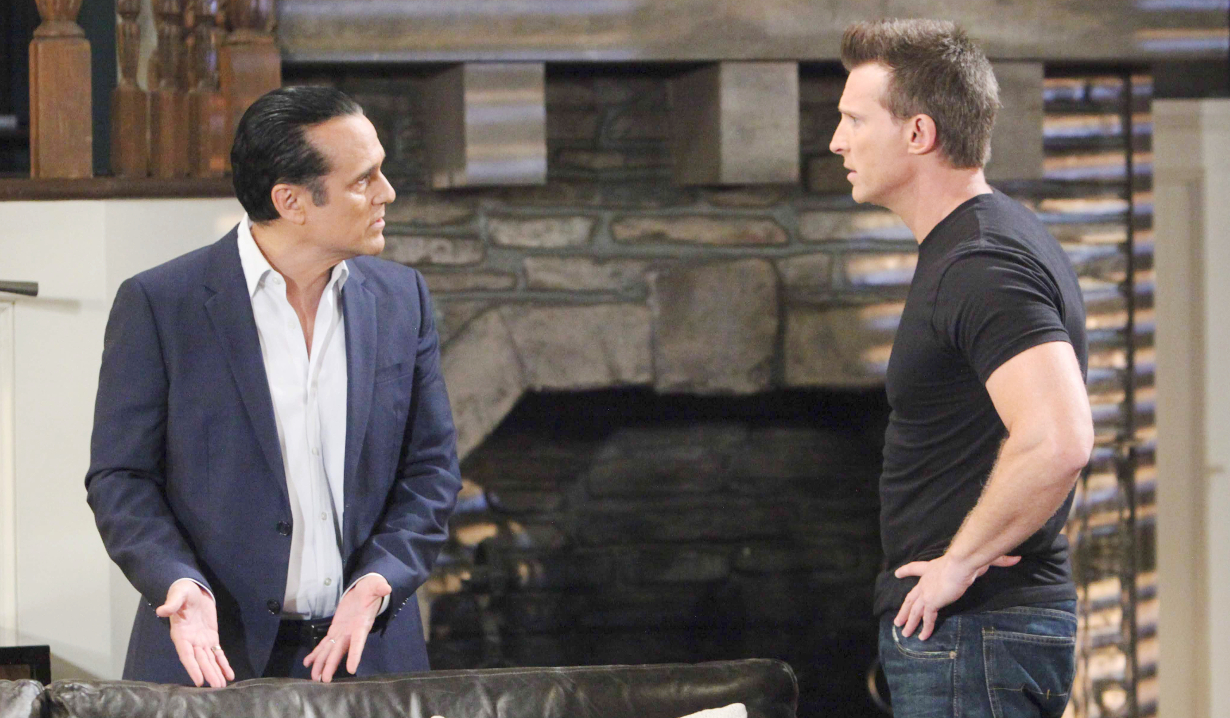 Jason arrives at the Corinthos compound. Sonny tells him that he’s not sure what Drew is planning to do but he’s in a position to take him away from his family. Jason says that Margaux can try all she wants but she can’t take him down. Stone Cold insists they just need to prove to her that her father was a willing criminal. He explains that Spinelli has dug up some more dirt on Moreno, but he could have been working with the cops too. Sam interrupts and says that once she’s done with Margaux, the DA will have to accept that this plot is pointless. She explains Spinelli handed the case over to her. Sonny goes upstairs for a tea party with Avery. Sam and Jason discuss Drew and she admits he came to see her about the Oscar situation. Jason is glad to hear that and tells her how hard this has been on Monica. They talk about Spinelli dumping the case on her lap to try and push them together again. She reminds him of how much Spinelli believes in them. He offers to talk to Spinelli again, but she tells him not to. They just need to make it clear to him that they aren’t ready to be together. Sonny returns and Sam gives them a photo of Margaux and her family. Sonny recognizes her mother. She was having an affair with Scully. TJ has dinner with Curtis and Jordan at the Metro Court. They talk about how awesome a wedding on the Haunted Star will be. TJ asks if Stella will attend. Curtis explains they tried but she wouldn’t come around. TJ and Jordan doubt he is really going to let this go. Curtis wishes things were different. Jordan hates causing distance between them. He refuses to cancel the wedding. TJ offers to talk to Stella, but they doubt that will help. He’s sure he’s the only one who has got a chance to change her mind and leaves. Jordan tells Curtis she wants to find the man that Stella was forced to give up. He loves her for that. Over at the bar, Peter runs into Maxie as she fawns over James. He fawns too, and she lets him hold his nephew. Peter gets choked up and says he’s been missing family his whole life. Suddenly, she notices a rash on the child. Out in the hallway, Drew joins Margaux. He’s not sure why he hasn’t turned her into the cops. She points out that he has no evidence against her. Margaux repeats that this is the only way to bring Sonny down. She goes on about how unfair losing her father was and Drew reminds her that her dad was in the mob. She repeats that Sonny needs to pay. They rehash what might have happened. She begs him to help but he refuses. He’s not doing this for Sonny or Jason but for Sam and Danny. Besides, she’s been manipulating him for months. Even if he got his memories back, he’d lose the last five years and those memories mean everything to him. She’s sure he’ll want the flashdrive one day and walks off. When she gets into the elevator, she cries. At the hospital, Stella finds Michael sadly staring at babies in the nursery and pats him on the back. They talk about grief and he wonders how she’s doing. She admits she’s been trapped in a cycle of anger and grief. It’s a real burden and she wants to put it down. He admits that he couldn’t go to the therapy sessions she recommended. She urges him to grieve however he can. Michael explains that he visits Jonah’s grave a lot. Coming to the nursery helps too. It reminds him that there is joy in the world and life goes on. They talk about Wiley and how good it makes Michael feel to hold him. They hug and he wanders off. By the elevators, Maxie and Peter arrive and she’s freaking out about the rash. She gets the baby checked out and then tells Michael and Peter that James’ pants were just chafing him. She’s really embarrassed. Peter decides to go. Maxie offers to drive him, but he points out it’s not on the way. After he walks off, Maxie and Michael talk about babies and tell each other that they are doing great. Meanwhile, TJ finds Stella in the nursery. She’s thrilled to see him until he brings up the wedding. He suggests she let the anger go for her own sake. She can’t. TJ is sure she will eventually give in to him.

Kevin finds a reason to hope.

Michael has a talk with Sonny.