Thursday October 18, 2018: Olivia has bad news for Jordan and Curtis, Joss tells Cameron her idea to win Oscar back, and Julian tries to support Kim. 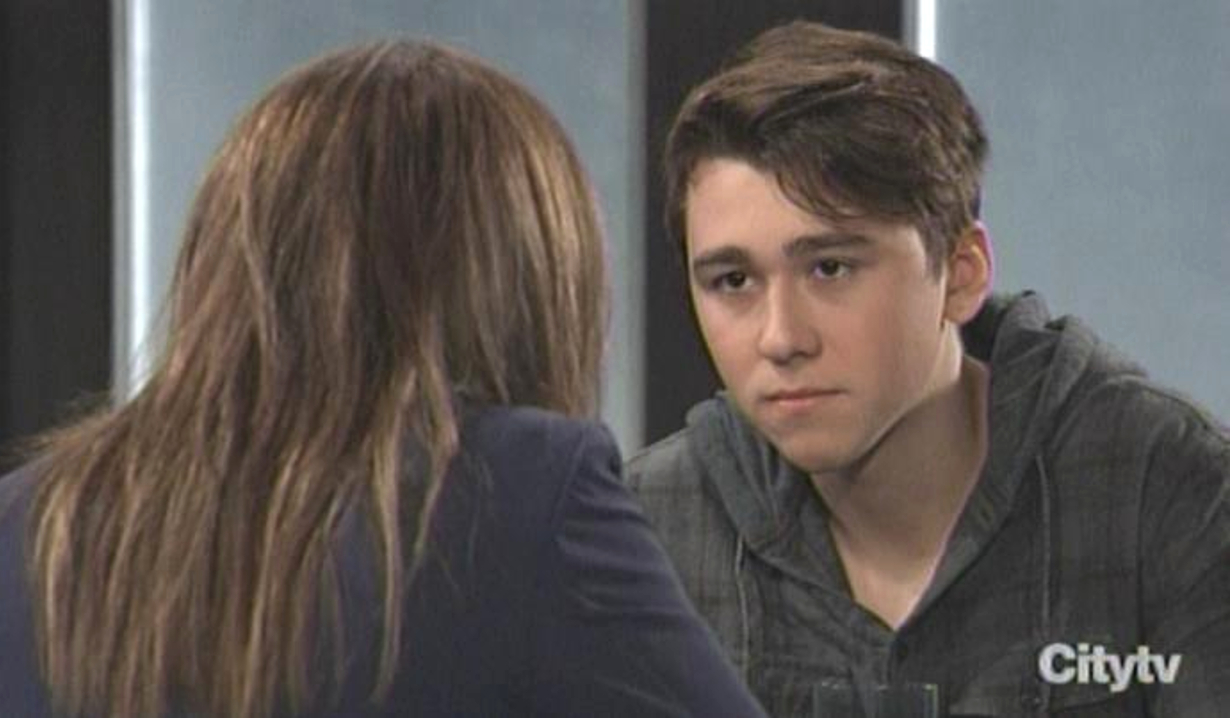 On the pier, Cameron is on the phone with Joss and reluctant to agree to be her boyfriend. She asks him over. Oscar demands an explanation. Cameron doesn’t explain. They bicker about school and Joss until Cam wanders off. At the hospital, Bobbie notices that Kim is distracted and guesses it must be about Oscar. Kim explains it’s his birthday today. They talk about birthday parties and how kids grow up. Bobbie opens up about losing BJ when she was seven and Kim thanks her for sharing. Later, Oscar arrives. Kim wishes him happy birthday and gives him a hug. She says that she and Drew would like to talk him out for dinner. He just wants her to let him live his own life. They debate his proposed treatment and he begs her to stop pressuring him. He refuses to be part of the drug trial. At the Corinthos compound, Carly spots Joss smiling and wonders why. Her daughter explains that talking to Spencer has given her a change in outlook. Joss asks her mom to take her shopping. Cameron arrives with half a pizza. The kids explain they need to do homework so Carly leaves. Cam wonders what kind of game Joss is playing. She explains that Spencer suggested she fake moving on to make Oscar jealous and fight to get her back. Cam says that Spencer is a super villain waiting to happen. He adds that Oscar has moved on and she should too. She doesn’t buy it and is sure something else is going on. After Cameron wonders how they can make Oscar think they are a couple, she decides this is a dumb idea. He suggests it might not be such a bad idea and agrees to pretend. They pose for a picture so she can post it. At Charlie’s, Julian tries to reassure Alexis that he’ll look out for Kristina. He tells her what a good bartender her daughter is. They talk about family and he admits he’s gotten very close to Kim and her son. The lawyer tells him Oscar asked her about the limits of parental authority. Before she can explain, she has to leave to meet a potential client. Kim rushes in and tells Julian how angry and guilty she feels. She beats herself up about how lousy she is. He admits he’s guessed that Oscar may have medical problems. She can’t talk about it. Julian promises to do whatever she needs. She cries on his shoulder. Liz and Franco visit the school to see Willow Tait (played by Katelyn MacMullen) about Aidan. Willow asks about the kid’s home life. Liz insists he has a normal home life. The teacher says he’s a great kid and she suspects he’s having some trouble. He’s super bright but socially withdrawn and seems to be cutting himself off. They talk about his princess pencils and Liz wonders what they can do to help him make friends. The teacher asks them to keep an eye on Aidan and deal with this gently. Liz insists that he’s perfectly normal at home. Franco and Liz exit. He shudders. At the Metro Court, Jordan and Curtis are eager to finalize their wedding plans. Olivia arrives with bad news. Their booking got lost in a technical glitch and someone else took the spot. They refuse to change their date. Liv apologizes a bunch and offers to help as much as she can. She gets an idea and makes a call. Across the room, Carly joins Bobbie and happily tells her that Joss seems to be in a better mood. They talk about seeing Nelle again and how she gushed over the baby. Bobbie tells her that Kim seemed affected when she mentioned BJ earlier. Meanwhile, Oscar meets with Alexis at a table. She tells him he doesn’t need a lawyer, he needs to talk to his parents. He explains about his cancer and how his parents are trying to force him into a drug trial. She tells him she had cancer too but encourages him to be hopeful. He tells her that his life in on the line with the planned treatment. Oscar wants to sue for emancipation. She suggests he get counseling instead. He threatens to go to Scott if she won’t take his case. Alexis discourages that and promises to think about this, but she warns that the end could be unpredictable. Carly is watching them from across the room and tempted to know what’s going on.

Olivia takes Curtis and Jordan to the Haunted Star. Lulu agreed to let them use it as a wedding gift. Jordan loves the idea. Curtis looks relieved.

Sonny has news for Jason.

Jordan has something to tell Curtis.

Sonny Is Alarmed by Drew's...

Sonny Recognizes a Photo of...