Sonny Is Alarmed by Drew’s Suggestion of Imminent Betrayal

Wednesday October 17, 2018: Sasha decides to stay in town, Lulu is warned about Peter, and Joss comes up with a plan to win back Oscar. 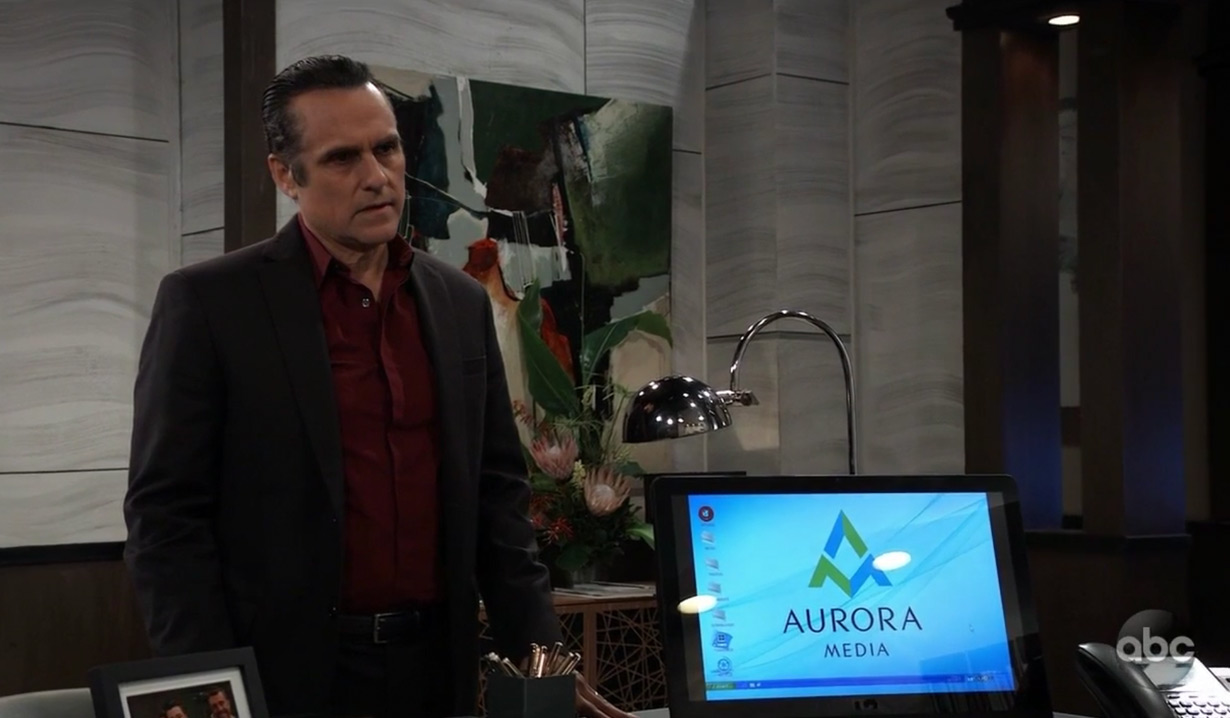 Spencer stops by Sonny’s and they share a hug. Joss walks in and is delighted to see Spencer. Sonny leaves them, and Spencer explains he wanted to see how she’s doing given her breakup. Joss admits she is stressed because it’s Oscar’s birthday and he’s probably out with his new girlfriend. Spencer tells Joss she is great and plenty of guys would love to date her, and perhaps Oscar needs to see that. Joss thanks him for the great idea and knows just how to get Oscar back. She’s going to use Cameron. At the Metro Court bar, Nina vents to Maxie that Sasha stood her up for breakfast. Maxie tries to assure her that Sasha is likely just running late. Maxie receives a text and has to rush off. In the lobby, Valentin stops Sasha, who was on her way to the airport. He introduces himself and works to convince her to give Nina a chance. Maxie walks by and overhears his passionate plea to Sasha. Sasha decides to meet with Nina, and Nina apologizes for acting like a mess yesterday. Nina presents her with some photos of her other family members, including her half-sister Kiki. Sasha asks about her father. Nina explains Silas never knew about her, but he was a good man, who died a few years ago. Sasha decides to cancel her flight and stick around a few more days. Nina is thrilled, and Sasha admits it was her ex-husband who changed her mind. She has never heard anyone talk about their ex with so much love like Valentin spoke of her. Up in The Invader office, Laura stops by to see Lulu and discuss the photo of her and Peter that was printed in the gossip column. Lulu assures her mother it was a friendly outing, but Laura is concerned Dante won’t see it that way and this is no way to fix things with him. In his office, Drew leaves a message wishing Oscar a happy birthday. Peter stops by because Drew asked him to. Drew wants to know if his memories were restored would it cause him to forget the past five years. Peter can’t be certain, but to the best of his knowledge, he believes Drew would forget the past five years. Later, Sonny drops by to see Drew and discuss Margaux and her plan to use Jason’s memories inside Drew against him. Sonny feels confident Drew would never flip on him, but Drew warns him not to be so sure. Sonny thinks Drew would have turned on him by now, but Drew states he had no incentive before now. Back in the lobby, Valentin runs into and tries to make small talk with Peter about how so many people seem to have forgiven him so quickly. Peter senses that Valentin is miffed that he’s been given a second chance, while Valentin is hated by more and more people daily. Valentin only cares what he, Charlotte, and Nina think about him. Peter suspects he is saying that just to get him to talk to Nina on his behalf, but Valentin insists he doesn’t need anyone’s help in winning Nina back. Up in Lulu’s office, after Laura leaves, Maxie stops by to chat with Lulu. Lulu suspects she has also come about the photo, but Maxie didn’t know about it. When Maxie sees it she can’t believe Lulu. Maxie suggests perhaps Peter being in her life is confusing her, the same words Lulu told Peter about remaining in Maxie’s orbit, and she reminds Lulu that she’s a married woman. Down in the lobby, Laura runs into Peter on the way out. She stops to tell him she’s sorry he had to grow up with Faison as a father and wishes him luck with his paper. Nearby, Valentin remarks that Laura is being very forgiving today. She snaps at him and reminds him that she owes the man who killed her son nothing. Oscar sits alone in the park until Cam comes upon him. Cam warns him that his plan has backfired, and Joss is trying to find out who his fake girlfriend is. Cam is tired of lying for him and refuses to help Oscar any longer. Oscar opens up to Cam about how this disease has changed everything for him, and as they talk, his phone constantly dings with messages. Cam asks who keeps texting him. Oscar says it’s just family wishing him a happy birthday. Cam receives a call from Joss, and Oscar orders him not to answer it. He answers it, and Joss asks Cam to be her boyfriend.

Julian talks with Alexis about Oscar’s legal consultation with her.

Kim tries to convince Oscar that the trial could be the only solution to his tumor.

Carly vents to her mom.