Tuesday October 18, 2018: Spencer returns to Port Charles, Maxie and Nina spy Lulu with Peter at the film festival, and Drew leans on Sam. 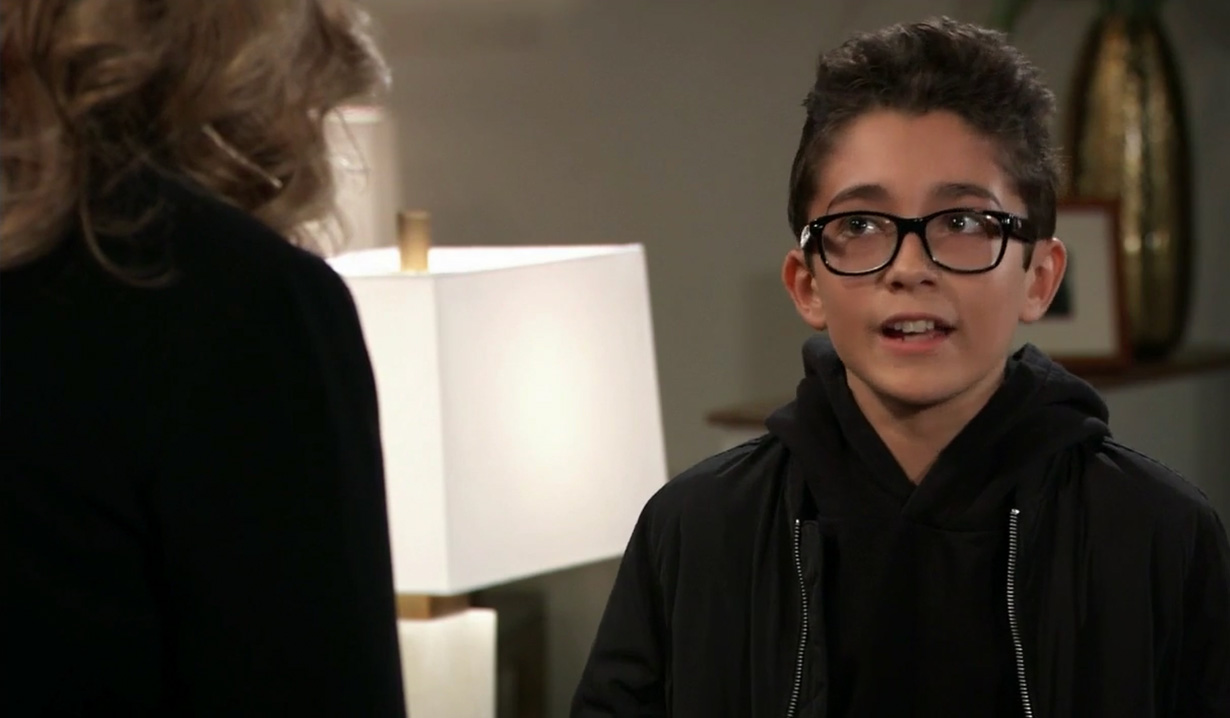 Griffin and Kiki attend a movie together at the Port Charles film festival, but head out early.Nearby, Maxie is stunned when she spies Lulu with Peter. Nina thinks it’s work related, but Maxie notes their demeanor isn’t very professional. Peter and Lulu walk over, and Nina pulls Lulu aside to talk about Charlotte. She quickly changes the topic to Peter. Lulu explains Peter got festival tickets through The Invader and invited her. She gushes that she’s learning so much from him and he’s a great guy. Later, Lulu realizes it’s getting late, so Peter offers her a lift home. They leave, and Nina admits to Maxie she might be right, and Lulu likes Peter more than she may realize. However, Nina feels Peter is only turning to Lulu out of loneliness seeing his friendship with Maxie imploded and they obviously won’t be as close as they once were. Maxie scoffs at the statement.

Laura is shocked when she finds Spencer standing at her door with flowers. He claims it’s fall break and he wanted to come home to support Joss, who just broke up with her boyfriend. Laura thinks Joss is just an excuse he’s using for something else. At the Metro Court bar, Ryan enjoys a glass of wine and is surprised by Ava, who joins him. She admits their talk helped her, though she is considering leaving town for a while. He believes that is the worst thing she could do and notes running from her impulses for revenge won’t solve them, but working with him will. She will consider the offer. At the Quartermaine mansion, Monica is thrilled when Jason checks in on her. He knows she’s concerned about Oscar and asks how he can take care of her. He feels for her because she’s lost so many people already. She admits this sucks, but he can help her by spending time with Oscar and getting to know him. That way they can remember Oscar together if they lose him, which she hopes doesn’t happen. Jason loves her and tells her she’s a good mom and grandma. Monica just wants Oscar to have a chance. Drew stops by Sam’s place to talk. She promises she’s there for him always and he doesn’t have to go through this alone. Drew rambles about Oscar’s disease, all the people who don’t know about it, and all the complex ways in which various people are tied to Oscar. He is also worried about Monica, who has already lost so much. She reminds him to just be present for Oscar and to look for those good moments in every day. She tells him that those moments are one’s he’ll keep with him forever. Scout cries, so Drew goes to check on her. Kiki and Griffin return to her apartment for a private movie night. She admits that aside from the drinking and dancing, she doesn’t remember much about the night they were together. He won’t have that and invites her to dance. They waltz around the apartment, which leads to kissing and then sex.

Ryan returns home and is surprised to find Spencer there. Spencer apologizes to “Kevin” for keeping his grandmother in France for so long and keeping him and his wife apart. Ryan assures him the apology is unnecessary because they are family and family looks out for one another. Spencer decides to go out and see Joss and takes off. Laura can’t believe the nerve of Spencer and promises he will be back in school soon. Ryan suggests there is no rush in sending him back. She disagrees because they need time together. She suggests they should take advantage of this alone time they have right now. “Kevin” likes her idea, but says he needs a shower the stench of Ferncliff off of him. When he returns from his shower, Laura hands him some wine and toasts to the two of them. She is glad to be home because she missed him. She moves in for some romance, but he stops her out and claims that if Spencer returned and walked in on them it would be traumatic for all of them. He asks her to wait a little longer and promises to make their reunion worth her while.

Spencer finds Ava at the Metro Court and scolds her for betraying him and trading justice for his father for a new face. She cries she was in a terrible place and had a horrible choice to make. He accuses her of only caring about being beautiful, and notes that she was more beautiful and had a heart when she was disfigured.

Maxie promises Nina that Sasha will realize what a great person Nina is.

Sasha asks Valentin who he is, and why he is talking to her.

Peter advises Drew there is no peace in looking backwards.

Spencer visits Sonny and says he’s back to right a terrible wrong.

Laura tells Lulu, “We have some catching up to do.”

Nelle Is Sentenced but Issues Brad a...

Sonny Is Alarmed by Drew's...