Nelle Is Sentenced but Issues Brad a Warning 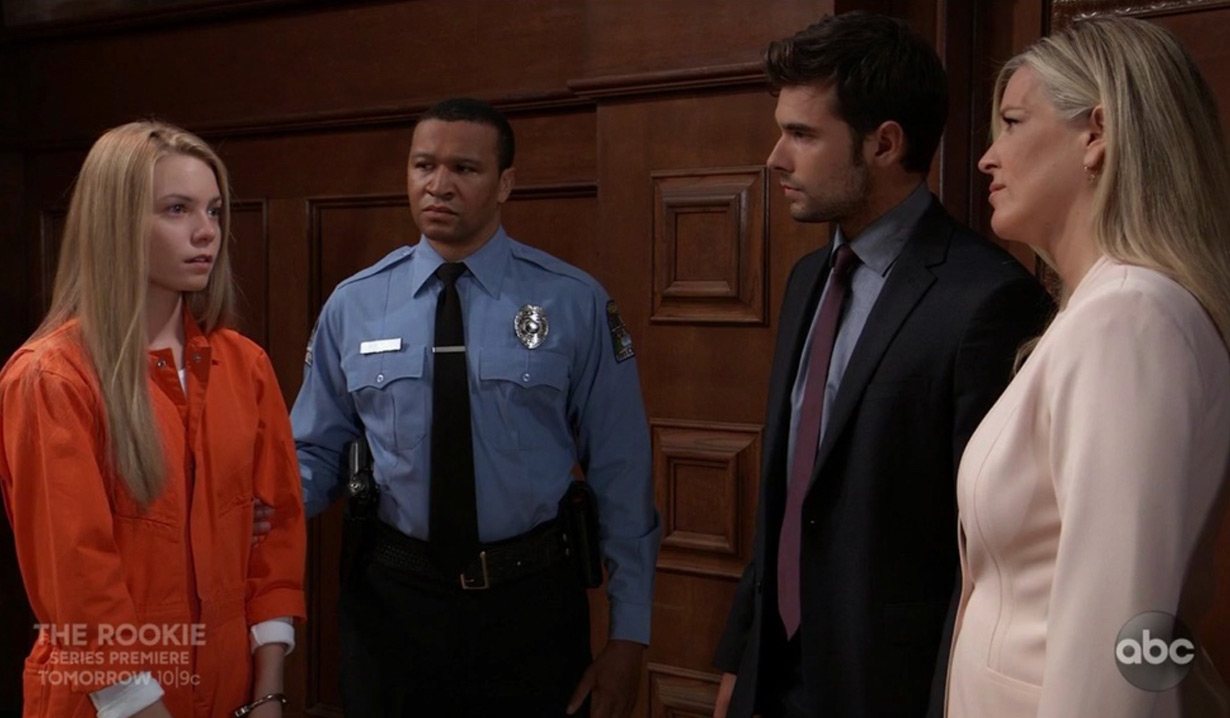 At their home, Ryan finds Laura setting up a romantic dinner which she calls the start to a second honeymoon but worries it’s too late. Laura looks at him and asks, “What have you done with my husband? You aren’t the man I married.” Ryan’s hand caresses a knife on the table, and he explains the look on his face as not wanting to disappoint her because he has a patient he must check on. Laura understands and is relieved it wasn’t something else. He promises to make this up to her. Ryan departs, and Lulu stops by with Charlotte for a visit. Charlotte runs off to read a book Laura brought her as a gift, and Lulu vents to her mother about Dante. She feels Dante up and left because he’s devastated over Nathan’s death and the WSB assignment has become an excuse to stay away. After Lulu and Charlotte leave, Laura receives another visitor at her door with flowers. Liz drops by Sam’s to talk about Drew, who needs them. Sam thinks Liz is there to tell her to stay away from Jason for Drew’s sake. Liz isn’t, she just wants them to put their past aside and help Drew. Sam swears she’d be there for Drew, but he has made it clear that he doesn’t want her help. Drew runs into Franco on the docks and they discuss Oscar. Drew wishes he had his memories to give Oscar more of a sense of family history, but Franco thinks he’s done an amazing job as is. Drew presents a hypothetical scenario in which he could get his memories back, but he’d have to hurt Jason and Sonny to do it, which would have a ripple effect on others. As they talk, Franco notices Drew isn’t mentioning Sam in this hypothetical scenario. Later, Liz meets Franco on the docks and fill each other in on their attempts to help Drew. At Sonny’s, Jason has received research from Spinelli on Dawson’s father and he’s no innocent victim. Marino’s financials show he was getting in deeper and reaping the rewards. Jason believes there is a reason Scully wanted Marino dead and wanted Sonny to pull the trigger. A bigger question is why Scully wanted Marino done away with in the first place. Outside the courtroom, Nelle spots Brad with Wiley and comments he’s grown so much. Carly wonders how Nelle knows this because she’s never seen Wiley. Nelle states she saw a photo Brad posted online and asks to hold him. Brad refuses. He didn’t know her trial was today and only stopped by to pick up a passport for Wiley. Brady rushes off, and Carly asks Nelle what that big announcement she wanted to make was. Nelle claims it’s just that she’s not going to be found guilty because she’s not contesting the charges, which means Michael won’t have to testify and revisit his own mistakes and failings. Chase informs her by not contesting the charges that the mountain of evidence will send her to jail. Carly hopes it will be for a long time. Before he leaves, Nelle tells Michael that they will always be connected more than he knows. Ryan visits Kevin in Ferncliff, where his brother is awake and clear-headed. Kevin is furious with his brother for taking over his life. Ryan has decided to prescribe his brother a new drug regime and says there is only room for one of them out in the world, so Kevin has to stay there. Kevin is sure Ryan will be figured out and is stunned to learn Laura is back in Port Charles. Ryan assures Kevin that Laura and he and getting along fine, but Kevin believes she won’t be fooled for long. Ryan promises to take care of Laura one way or another. Ryan walks out as Kevin screams.

Carly and Michael return home and tell Sonny about Nelle’s plea and skipping the trial altogether. Michael can’t stop thinking about what Nelle said. Sonny urges him to forget about her, but Michael knows they always will be connected by the child they lost.

Back in court, Nelle is given the maximum sentence. Chase is satisfied and says justice has been served. Brad runs into Nelle once again outside the courtroom, and Nelle asks Chase for one quick moment with her only friend and his baby. She is given a moment and lets Brad know that she’ll be going away for a long time, but who knows, maybe she’ll get an early release for good behavior. She looks at Wiley and comments there is no stronger bond than that between a parent and child. Nelle is taken away.

Drew shows up at Sam’s door.

Maxie vents to Nina about a duo who arrive to an event together.

Kiki wants to tell Griffin something.

Laura scolds Spencer and says, “The next time I take you back to school you must stay there.”

Sam assures Drew she’s there for him and whatever he needs.