Thursday October 11, 2018: Peter tries to get Maxie to loosen up, Laura worries about Kevin’s odd behavior, and Ryan has another session with Ava. 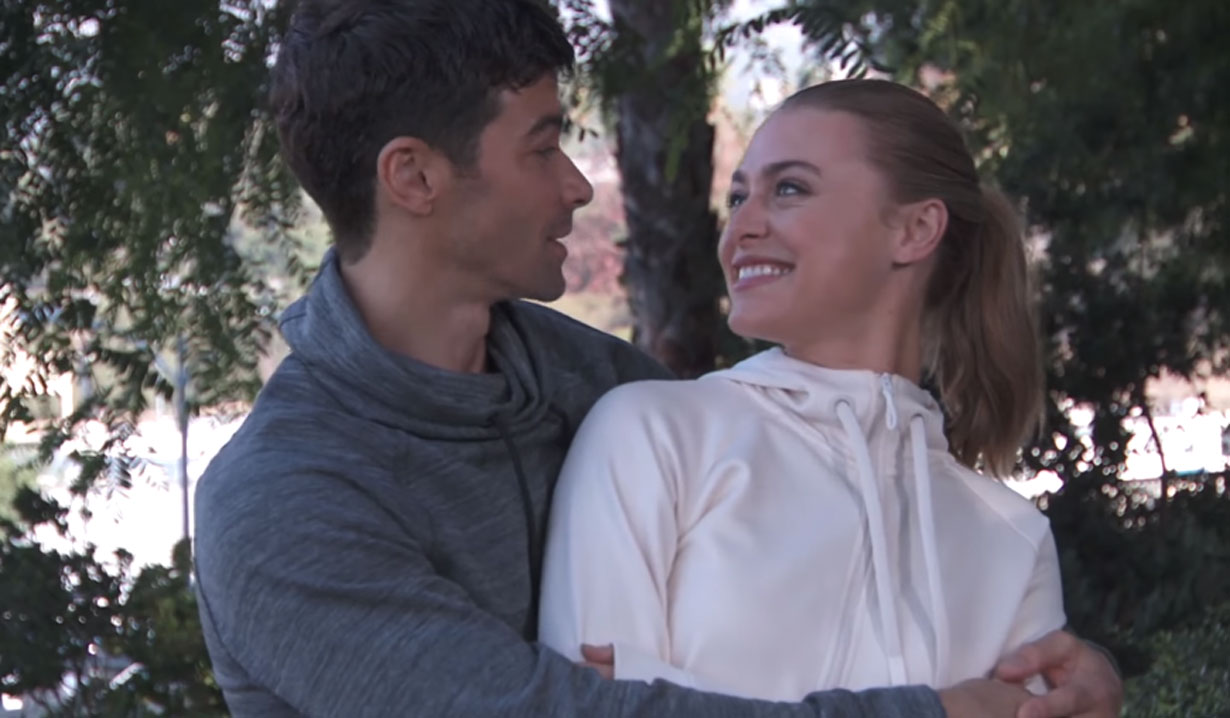 In the park, Ava watches Griffin and Kiki stop their jog to make out. She gets fed up listening to them talking about doing things he never did with Ava and storms off. Kiki and Griffin stroll around talking about movies and how they need to focus on each other. He got them passes to the film festival and hopes she can help him become a film buff. Elsewhere, Nina and Curtis wait to meet her daughter. She’s nervous so he encourages her to relax. They sit down at a picnic table and she worries about her daughter being delayed. He spots Sasha and leads her over to make the introductions. There’s some awkward small talk until Nina hands her flowers. Sasha asks to see the DNA test results and Curtis gives her both sets. She looks them over and accepts that Nina is her biological mother. They try to get to know each other and discuss horse riding. Curtis leaves them alone. Nina tells Sasha they should take things slow and asks her for a drink. At Kelly’s, Laura is startled to walk in on Ryan eating a cronut. She’s surprised to see him there and asks why he left so early. He didn’t have the heart to wake her and complains about how stubborn his virus is. Laura feels like he’s been avoiding her so he’s reassuring. Outside, Maxie meets with Felicia. Peter comes out and thanks Maxie again for helping him in the elevator. After he walks away, Felicia demands to know what that was all about. Maxie explains they’ve called a truce and are working on their friendship. Sitting on a bench, Maxie explains that she’s done being bitter and Peter is James’ uncle. They go inside and Ryan happily uses them to interrupt Laura asking him more questions. Felicia announces that she’s going on a cruise. “No! You can’t do that,” he bursts out, arguing it’s unhealthy to run away from the anniversary. Maxie argues that letting Mac whisk her mom away is just what she needs. Ryan controls his seething rage as Maxie talks about how awful he is. He excuses himself to leave for work. Laura follows him to the door and asks him to finish their conversation later. Back outside, Ava meets Scott by the wall. She tells him she’s been having lethal thoughts. The lawyer encourages her to forgive Kiki. Ava rails about Griffin moving into Kiki’s building and them flaunting their relationship at her. Scott suggests that lashing out at them just pushes them together. She doesn’t like that suggestion. As she stomps to Kelly’s, she bumps into Ryan. He senses she’s upset and asks if she needs someone to talk to. They arrange an appointment and he leaves. Scott tells her that the shrink is a quack. Back inside, Laura tells Felicia how edgy ‘Kevin’ has been. She suspects this anniversary is rough for him. Laura just wants it over with so they can get some peace. At the Invader office, Lulu chats on the phone to Dante about her Ryan Chamberlain story. This leads to an argument. Peter arrives as she becomes distraught. Once she hangs up on her husband, Peter interrupts. They get to work. He reads over her work and tells her how good it is, but he wants to tweak a few things. She starts talking about how much she misses Dante and how he would look after the children. Now they just fight about everything. She apologizes for being unprofessional and then starts crying about Dante again. Peter is sure she’s starved for adult conversation and asks her to the film festival. Maxie arrives outside the door in time to hear this. Lulu claims she is too busy for fun, but Peter talks her around. At the Metro Court, Margaux tells Drew that she has the flashdrive and explains how she found it. He’s not happy it took her so long to tell him this and asks why she’s messing with his life. Drew assumes what she’s done is a crime and refuses again to help her go after Sonny. The DA says this isn’t blackmail, it’s a trade. He doesn’t buy that. Margaux insists that she really likes him and this is a fair trade. Drew keeps rejecting her and she keeps prodding.

Ava meets Ryan at Kevin’s office and tells him she’s had her revenge on Griffin, but it’s not enough. She still wants revenge on her daughter. He wonders what the worst thing she could do would be and urges her to consider it. Ava asks if he’s encouraging her to kill her daughter. She assumes this is reverse psychology and starts laughing, claiming she would never do that. He says he’d like to see her again. Ava remarks that he almost seems flirtatious, but she knows Kevin would never cross the line. “Dr. Kevin Collins? He’d never do that,” Ryan says.

Nina has reason for regret.

Sam has lunch with Alexis.

Jordan opens up about her mistakes.