Margaux Offers Drew His Memories Back in Exchange for Jason’s

Wednesday October 10, 2018: Jason and Sonny ponder how to deal with the DA, Oscar gets Cameron to help him push Joss further away, and Finn refuses to engage with his father. 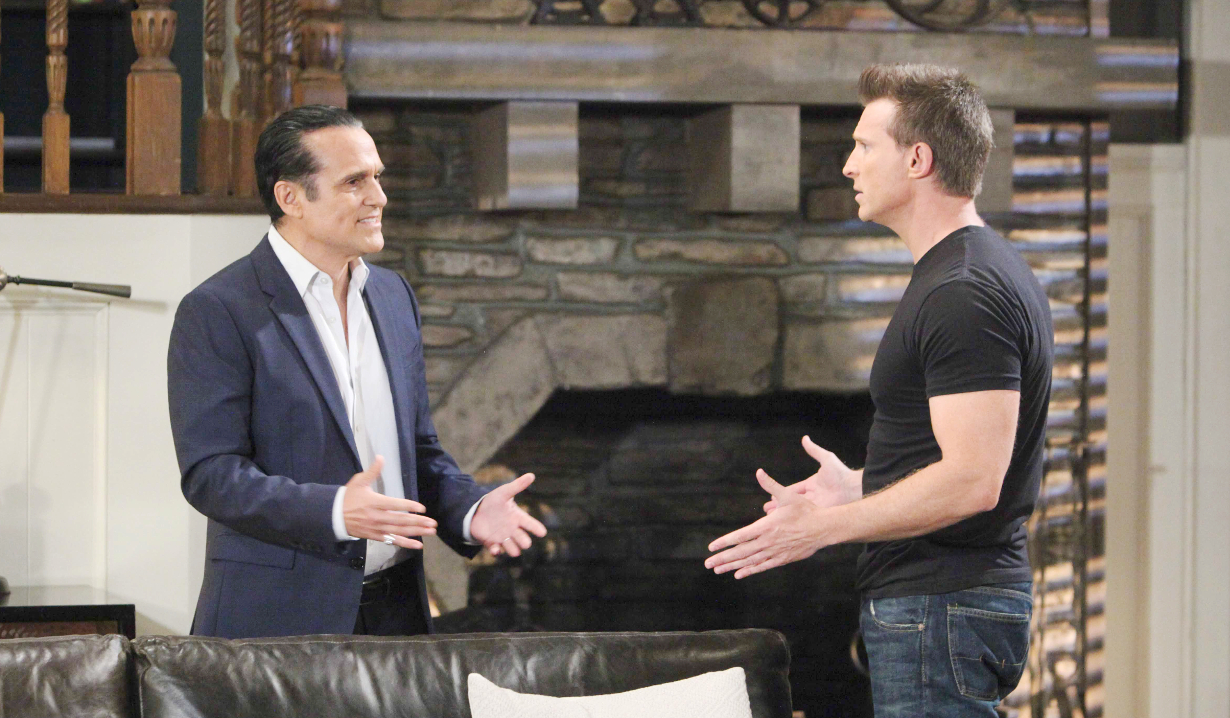 Joss is doing homework at school when she finds a picture of Oscar in her book. Cam spots her looking at it and suggests she get rid of the picture. She worries about Oscar and refuses to give up on him. That sounds unhealthy to Cam. Joss is tired of not being clued in. Oscar bumps into his mom at the hospital and gets sassy. She tells him he can’t cut the people who love him out. Kim urges him to tell Joss the truth and make every moment count. He’s unconvinced so she tries again. Oscar doesn’t want to watch Joss grieving for him and complains about how unfair things are. Kim says he’s a disappointment and he storms off. She slumps and sobs until Liz joins her. The doctor tells her about the fight she just had. She worries about how she will regain her son’s trust. Liz urges her to tell Julian about the situation so she’ll get some support. Down the hall, Finn tells his father and Chase that Gregory has a form of recurrent Lyme disease. The doctor has outlined a line of treatment for his father’s doctor in Berkley to take. Gregory wants to stick around and be with his sons. Chase takes off to call his mom and Gregory accuses Finn of hating his step-mother. The doctor changes the subject. His father doesn’t appreciate him refusing to acknowledge anything he says. Gregory keeps trying but Finn won’t engage as anything other than his doctor. Chase returns and tells Finn how grateful his mother is for his help. Drew wanders into the Metro Court to meet Margaux. Mike calls him over and introduces him to Stella and Carly. He warns him about the DA’s agenda. After Drew walks across the room, Mike tells Stella and Carly how excited he is about spending time at the care facility. They head off to visit it. Across the room, Margaux asks Drew if he’s okay. He claims he hasn’t been sleeping. She asks him again to help her with Sonny, but he still refuses. The DA begs him to help her make Sonny pay. He reminds her that Jason’s memories aren’t evidence, but she asks him to let her worry about the law. Drew refuses again but she keeps begging. When he keeps refusing, she offers to get him his memories back in exchange for information. She admits the flashdrive is still around and she has it.

Oscar runs into Julian in the park. He informs him that he’s dropped out of school. Julian hopes he’s not doing that to get back at his mom. He wants to help him if he can and tells him how much his family avoids him. Oscar wanders off and meets Cam, who complains about what a ‘downer’ he is. Oscar is determined to make sure Joss is over him before he’s gone. He needs her to remember him as her first love not the boy she watched die. Cameron agrees to help him one last time. If it fails, he needs to come clean. Oscar asks him to ‘doctor’ something, sure it will be enough to put Joss off. Later, he sends a message.

Julian drops by the hospital. He tells Kim about seeing her son and offering him his help. She tells Julian he’s a good guy and, unexpectedly, she’s fallen for him. He fell for her a while ago. They kiss. At the Corinthos compound, Sonny tells Jason about Mike visiting a care center. The topic turns to the DA and Sonny informs him of his run-in with her last night. They realize that her personal grudge against him makes her more dangerous. Jason wants to treat her as a threat, but Sonny says they can’t escalate right now. Stone Cold has asked Spinelli to dig up dirt on Margaux’s father to turn her against him. Carly, Mike and Stella arrive and tell Sonny about his day and how great the place was. Mike thinks he can handle this. Stella agrees to take him for his first day. As Mike walks her out, he thanks her for all her help. After Mike goes up for a nap, Carly tells the men about Drew having breakfast with the DA. Sonny guesses she’s looking for a more convoluted way to come after him.

Back at school, Cam sits with Joss. A message comes in for Cam from Oscar. She looks at it and sees it’s a photo of Oscar with another girl. Joss asks Cam to leave her alone and cries.

Margaux won’t back down.