Tuesday October 9, 2018: Margaux crashes a moment for Sonny and Carly, Laura worries about Kevin, and Sam and Jason discuss their relationship and Drew. 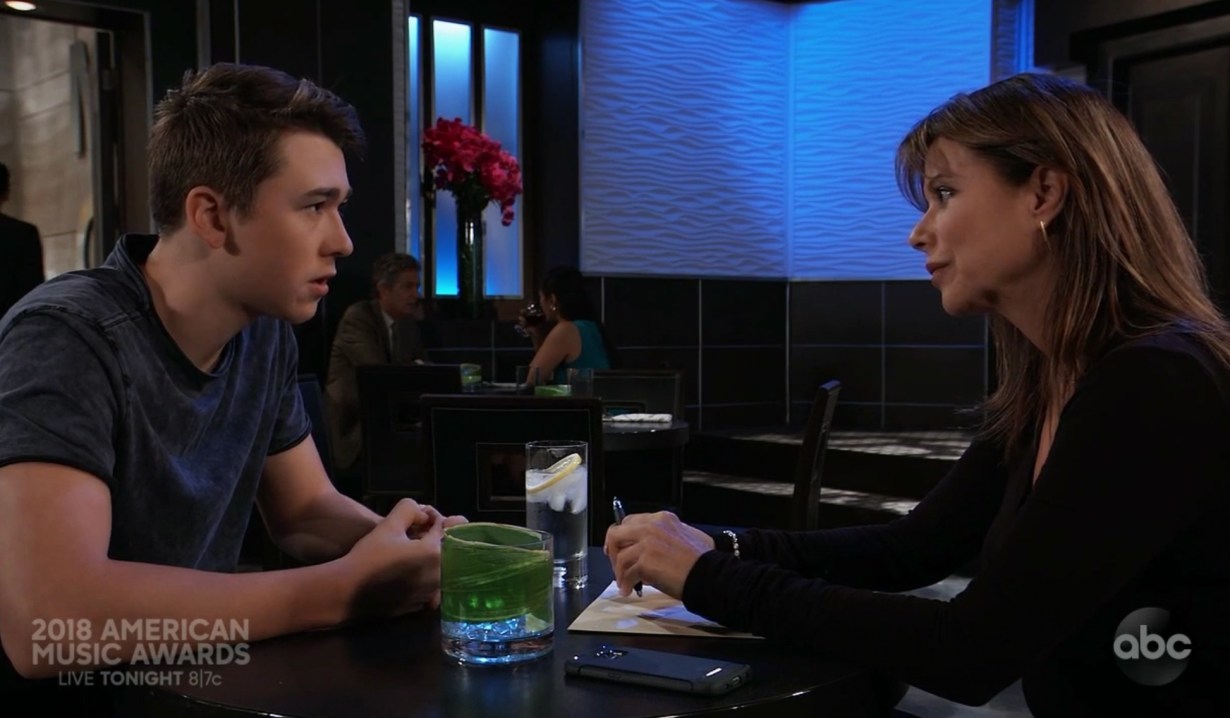 At the cemetery, Carly screams at Margaux that she is sick for crashing their memorial for Morgan, but Margaux explains she had her father’s remains interred there and was coming to visit him. Vincent’s plot is next to Morgan’s, which Carly thinks she did to be vindictive. Carly states Margaux will never be able to charge Sonny with anything. Margaux doesn’t know how Carly can be with Sonny knowing he has murdered countless people and gets away with it. The DA walks off, and Sonny thinks the DA has a point and he’s done some terrible things. Carly assures him that she knows he is a good man and the DA knows nothing. At GH, Oscar eavesdrops on his parents as Kim explains to Drew that they have control over his medical care and can force him into the drug trial. Oscar runs off. At the nurse’s station, Liz talks with Terry about Aiden, who continues to not want to go to school for some reason. She sees Terry has Oscar’s file and realizes her problems are minimal compared to Oscar and Kim’s. Later, Kim visits Terry in her office to discuss Oscar, who doesn’t want to do the trial, though she feels it’s his only chance. At the Metro Court, Joss leaves another voicemail for Oscar and begs him to meet her at their bench. Elsewhere, Laura connects with Alexis and asks for her help getting back into the swing of things, especially working on the hospital board again. Laura notices Alexis’ watch, and Alexis explains it was her mother’s and a gift from Mikkos. She jokes it is probably rigged to explode, and that it keeps freezing at 10:10. Later after Laura is gone, Alexis gets a call from a prospective client who insists they meet immediately. At Sam’s place, Sam asks Jason to stay so they can talk. She grabs a bottle of wine, which she explains she’s come to enjoy over the past five years, even though he is still a beer guy. Sam tells Jason their kiss earlier meant something, but right now she can’t take things any further. Jason understands and offers to wait for whatever she decides, and jokes that fortunately there are cold showers to help him. Drew stops by and sees Jason is there and wine glasses are set out. Sam insists he come in and wants to be honest with him about Oscar’s situation and what they know. Sam reveals that Jason knows about Oscar because he found Oscar at the pier after he ran away and convinced him to call his parents. Drew thanks Jason and decides to leave because he knows he’s interrupting. Sam wishes she could help Drew but knows she can’t. She also knows she can’t push herself on him and only let him come to her, which she realizes is something Jason would say. Jason decides to leave but says the next bottle they open together will be a beer. In the park, Joss is thrilled that Oscar showed up at their bench and believes they can fix whatever is wrong, but Oscar insists they are over. He didn’t get her message to meet and says he was on the way to meet someone else. He claims to not love her and that he never did, but she doesn’t believe him. He walks off, and she goes in the other direction.

Back at GH, Laura surprises Liz. They chat, and Laura brings up how distant Kevin has been since she returned. She thinks the Ryan Chamberlain anniversary is getting to him, and perhaps her being gone so long has put a strain on things. Liz advises her not to ignore her instincts if she thinks something is wrong. Laura calls home and suggests she and Kevin finally celebrate her homecoming, but he informs her that he’s still sick. Elsewhere, Joss finds Kim and talks to her about Oscar. She knows he is in pain about something and asks how she can help him. Kim can’t violate Oscar’s confidence but lets her know she shouldn’t give up on him. Oscar meets Alexis at The Metro Court to discuss whether parents can dictate a child’s medical decisions. He claims it’s for a report, and Alexis explains the law will side with the parents as long as they act in a child’s best interests. He asks what if they don’t act in a child’s best interests. Alexis wonders if they are still talking about a report but advises that a child in an extraordinary case could pursue legal measures against their parents. Elsewhere, Margaux calls Drew and asks him to breakfast in the morning because she has a proposition.

Finn’s dad asks, “When are you going to stop hating her?”

Joss insists to Cam she will be there for Oscar no matter what he’s going through.

Jason advises Sonny to treat Margaux as a threat.

Mike Reveals to Sonny the Location...