Jason Admits He Still Loves Sam and They Kiss

Friday October 5, 2018: Kiki and Griffin decide to see where things go between them, Joss plots to win Oscar back, Sam and Jason work on a project for Danny, and Maxie forgives Peter. 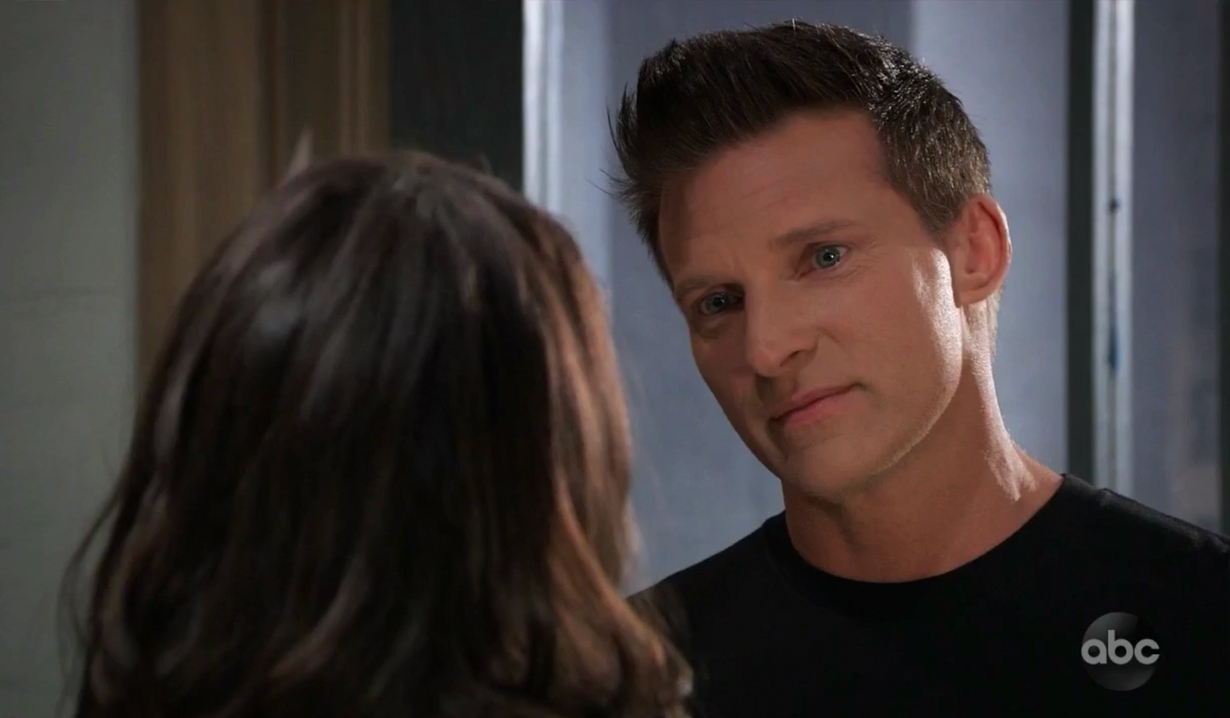 Franco brings Aiden to his mom at GH because he doesn’t feel well. Liz gives him a checkup, but he doesn’t appear sick. She asks if something happened at school to upset him. He says his lunch was gross, so she gets him a ginger ale for his stomach. In the hall, Liz speaks with Franco about what is really going on. Franco suggests maybe he just has a stomach ache. In Kim’s office, Oscar vents to his parents that he’s dropping out of school because he sees it as a waste of what time he has left. He admits to researching his tumor online and it will take a miracle for him to make it to next year, and he also knows the immunotherapy trial could kill him quicker than the tumor might. Being pumped full of drugs isn’t how Oscar wants to spend what time he has left. They accuse him of not thinking rationally and pushing those he cares about away. Drew lets Oscar know breaking up with Joss is not protecting her and she will eventually learn the truth. When Kim begs him to make things right with her, Oscar storms out. At Joss’ house, she informs Cam of her plan to decorate her and Oscar’s special bench to remind him how happy they were. She uses Cam’s phone to text Oscar and wants Cam to bring him to the bench. Cam believes she’s wasting her time and Oscar really doesn’t want to be with her. Joss won’t believe that.

More: Genie Francis interviewed about her return to GH At Sonny’s gym, Kiki and Griffin passionately kiss. Both admit they haven’t been able to stop thinking about the other since their night together. Griffin believes there is nothing stopping them from seeing where things go between them. However, he doesn’t want to rush things, and invites her to the Port Charles film festival for a proper date. At Crimson, Maxie asks Peter why he’s avoiding her. He feels keeping his distance is the best way not to remind her of the hurt he caused her. She admits she was angry and hurt with him for lying to her, but she also remembers how much he supported her after Nathan’s death. The event on the elevator made her realize she was done with the bitterness and anger and she does forgive him. He hopes she will consider letting him visit her and his nephew from time to time, and she thinks that is a good start to resuming their friendship. She is curious about his panic attack and asks if it was due to the PTSD from Obrecht kidnapping him, or something else. He reveals Obrecht was part of it, but it also goes back to his childhood. He recalls Faison teaching him how to swim by throwing him into the deep end of the pool. He passed out, and certain things trigger that sensation and memory for him. Peter has to get back to his office and plans to take the stairs, but Maxie convinces him to take the elevator and offers to ride with him. At Sam’s, Danny asks his father if he still loves his mommy. Jason says he does, so Danny wonders if his mom still loves his dad. Sam interrupts with snacks for Danny, and reminds him that his Grandma Monica is coming soon to pick him up. He runs upstairs to get his things for his trip to Monica’s. Before leaving, Danny convinces his dad to put a Lego castle together for him while he’s gone, and Sam helps him with the project. They manage to finish it, and Sam jokes she gives it ten minutes tops with Danny before it falls apart. Jason says then they’ll put it back together again, and he likes working with her. She thanks him by giving him a kiss on the cheek, and slowly they come together and share a real kiss.

Back at GH, Aiden claims to Liz and Franco that he feels he may still be too sick tomorrow to go to school. Liz knows something is up. In the halls, Cam runs into Oscar, who just received his texts. Cam warns him that Joss doesn’t believe he dumped her for no reason at all, and he can’t keep lying to her about his cancer. He tells Oscar to come clean with Joss. Oscar refuses and thinks it will be easier for Joss to hate him when he’s gone. In Kim’s office, Drew and Kim believe Oscar will come to his senses and realize the trial is his best chance.

Back at her place, Joss finds Oscar has blocked her from his MyFace page and has changed his status to single.

Kiki threatens to drag her mother out.

Nina talks with Lulu about her daughter and worries what if she wants nothing to do with her.

Valentin asks Laura how long she’s in town for. She tells him, “For good!”

Mike tells Sonny the gun has been at the bottom of the Hudson for thirty years.

Sam undresses as she and Jason continue to kiss.

Ava Bonds With Ryan as Kiki and...

Mike Reveals to Sonny the Location...