Ava Bonds With Ryan as Kiki and Griffin Kiss

Thursday October 4, 2018: Carly lectures Ava, Nina looks for advice about her daughter, and Finn remains cold to his father. 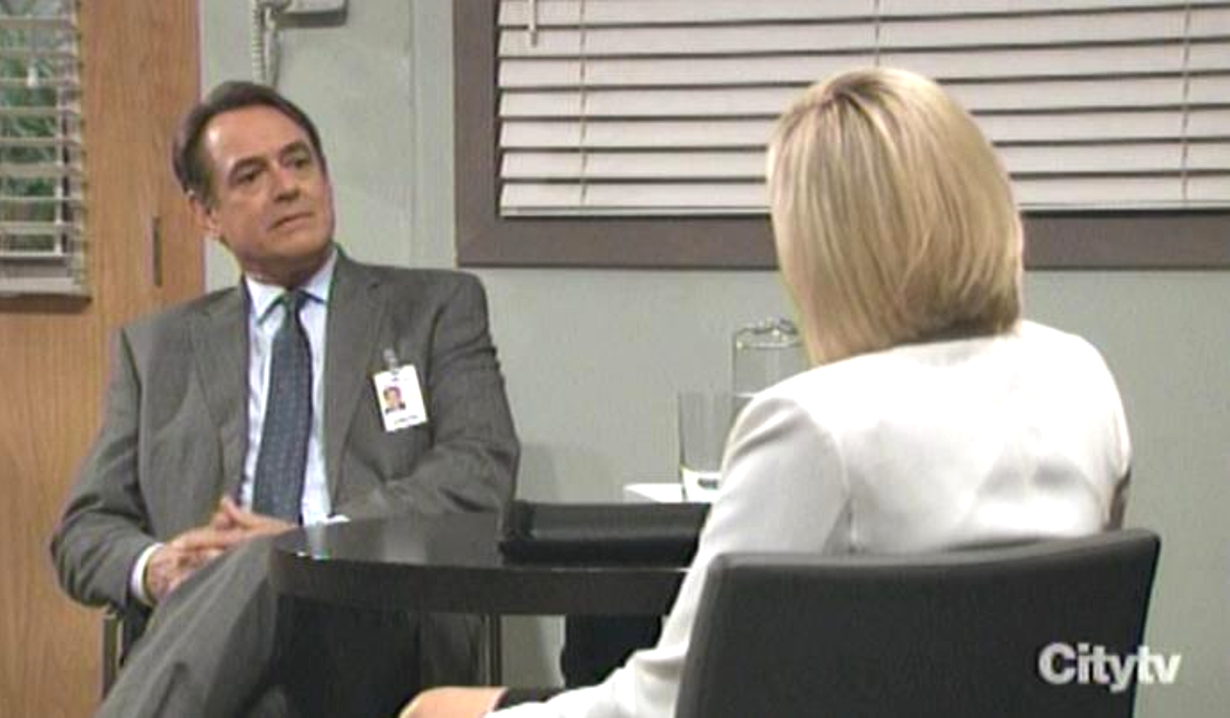 Carly comes down the stairs of the Corinthos compound and talks to Jason about Mike. He still doesn’t remember anything about the gun. Milo calls to say that Ava is there. She strolls in looking for her daughter. Carly says that Avery is busy and asks her to go. Ava reminds Jason that she saved his life and he reminds her that he got her the formula to save her face. Carly asks to speak to Ava alone and mocks her for Griffin dumping her for her daughter. She keeps taunting Jerome and makes it clear that Avery will not be seeing her tomorrow. Ava brings up the custody arrangement and Carly threatens to take her to court. Carly points out that tomorrow is the anniversary of Morgan’s death and one day Avery will know her part in it. Kristina climbs down the stairs of Sam’s place after a long night out. Jason arrives and Kristina thanks him for saving her life before she takes off. Danny soon shows up with a book about families. Jason reads it with him. The kid asks if he loves Sam. Peter finds Griffin boxing at the gym. They talk about him being booted from the hospital and Peter asks if he’d be interested in being his medical editor. Griffin hopes his medical career doesn’t come to that. Kiki arrives and eavesdrops as Griffin asks Peter if he ever got closure. Peter says he didn’t and walks out. After Griffin spots Kiki, she reminds him that he didn’t take advantage of her. She enjoyed it and still wants to be with him. They kiss. At Crimson, Maxie is reluctant to believe that Nina’s daughter is alive. Nina has proof and tells her the story, but Maxie looks doubtful. When she asks Nina when she will meet her daughter, Nina insists it won’t happen. She doesn’t want to rip her life apart. Maxie points out that Sasha already knows about the DNA tests. Maxie suggests that Nina is just afraid of rejection. Her boss starts drinking water ferociously until Peter interrupts. She tells him the daughter story, only claiming it’s about a friend. She asks if her friend should try to have a relationship with the girl. He says that if a parent wants to offer love, it should be up to the child to accept it or not. Maxie and Peter leave the office and she tells him he said the right thing. Back in her office, Nina calls Sasha and leaves a message, announcing she’s her mother. Ryan brings Felicia into Kevin’s office. She wants to talk about Ryan and is worried that this would be like pulling teeth. He pats her on the shoulder and reassures her. She reminds him that he completely broke down after the scandal around his brother. He says he doesn’t live in that headspace any more. Felicia has an idea about how to protect them from the press. She suggests a press release to distance them, but he thinks they should guide them to tell the story accurately and compassionately. She doesn’t like the sound of him trying to redeem his brother’s memory. He agrees and offers to ‘page’ her later, so they can finish this. Soon, Ava pops in. She tells him that her attempts at redemption have failed and people are still treating her like dirt. She hoped that loving a good man would make her better but then he betrayed her with her daughter. All the good inside her is gone and she’s full of rage and needs to hurt them. She asks him how to fight the need for revenge. He suggests that she’s using the rage to protect herself. Ava tells him she has a recurring dream about Avery following her and saying she’s ugly. Ryan says she’s beautiful and commends her for her candor. She’s amazed he’s not lecturing her for her moral failings and thanks him. He suggests she make an appointment so they can discuss revenge more. Down the hall, Gregory is with Finn and Chase in a hospital room. He talks about what a neat freak Finn was when he was a kid. Gregory asks his son to direct his hatred of failure into figuring out what’s wrong with him. Finn assures him that his condition likely isn’t life-threatening. His father asks two brothers to come to dinner with him. Finn shoots him down and walks out. Later, he returns and Gregory takes a moment alone with him to ask why they have spent so little time together. He says Anna is a great woman and he’s happy he seems to be learning to love again. He hopes that his son can forgive him for doing the same. Chase interrupts this awkwardness as his brother walks out. The cop asks his father what Finn’s problem is. His father doesn’t know.

Nina has cause for regret.

Sam has lunch with Alexis.

Jordan opens up about her problems.

Nina Gets Confirmation That Sasha is...