Nina Gets Confirmation That Sasha is Her Daughter

Wednesday October 3, 2018: Ryan tries to keep his distance from Laura, Joss realizes that something is happening with Oscar, and Felicia is eager to get out of Port Charles. 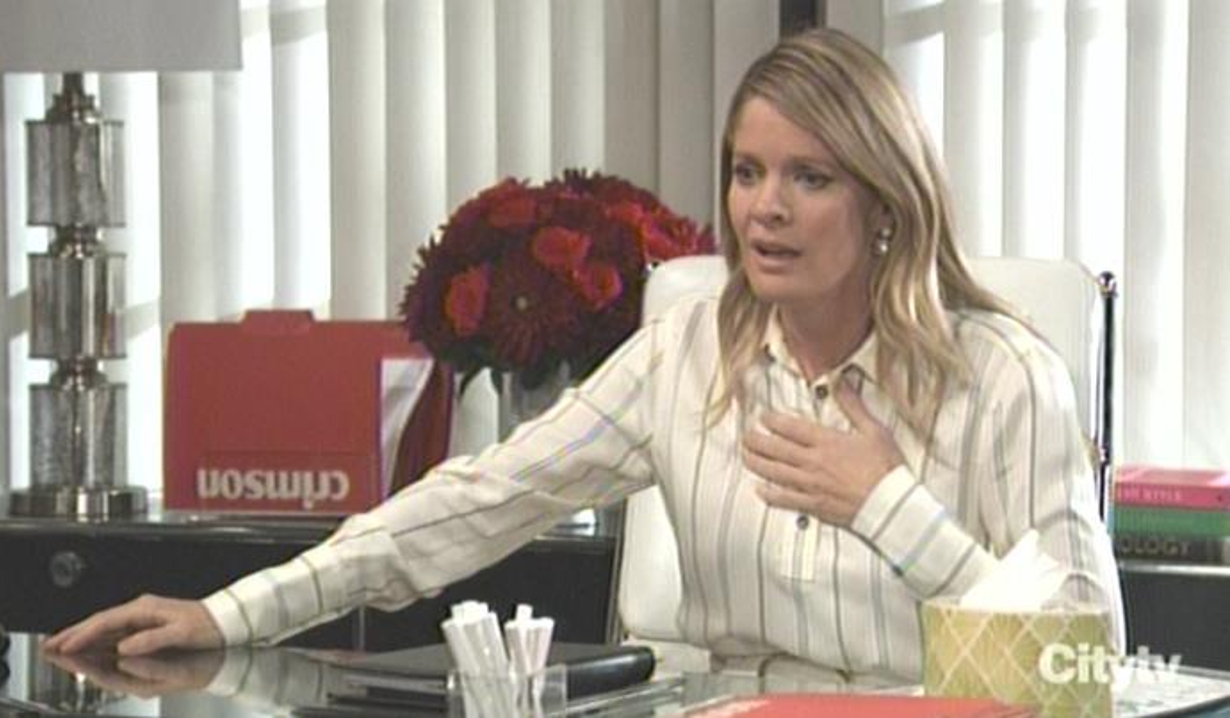 In the school library, Oscar offers Cameron his essay on Catcher in the Rye. He doesn’t need it. Cameron turns it down and wonders what’s up. Oscar confirms that he has cancer and plenty of people knew before him. Cam is sure things will be fine. Oscar explains that Joss still doesn’t know and Cameron doesn’t think that he should keep her in the dark. Pushing the essay into Cam’s hands, Oscar tells him to take it as payment for his silence and walks off. Joss comes down the stairs of the Corinthos compound in tears. She tells Carly that Oscar just dumped her. Joss doesn’t understand. Carly says it sounds like he’s going through something he’s not ready to share. This is incomprehensible to Joss. Her mom says it was his choice and she needs to decide how to deal with it. Carly tells her to cry and move on; nothing is her fault. Once Carly is gone, Joss calls Cameron over. When he arrives, she tells him Oscar dumped her and she needs to know why. Cam admits that Oscar was acting weird earlier. Joss realizes something is going on and demands to know what. She assumes it must be another girl. When he tells her she’s wrong, she asks for his help getting Oscar back. At Crimson, Maxie tells Nina that the WSB is getting close to capturing Obrecht. This means trouble for Nina, but she’s distracted by something. There’s a photo of Sasha on her desk. Curtis arrives and Nina chases Maxie out. Nina asks him why he didn’t tell her about searching for her daughter. He didn’t want to get her hopes up. The PI explains how he tracked her daughter down and hands her a phone number. They are waiting for the second DNA tests. Curtis wants some evidence that can’t be tampered with. Nina shows him her necklace. It’s half a heart. She suspects her daughter might have the other half. The second lab calls with the results. The match is a certainty. Nina has to sit down. Outside, Felicia jogs in to see Maxie and suggests they take a mother-daughter trip. Maxie thinks her mother needs the trip more than she does. Felicia admits that she’s trying to get away from reporters investigating Ryan’s murders. She’s worried the reporters will come after Maxie too. Maxie tells her to go on the trip with Mac. Once her mom takes off, Maxie interrupts Nina and Curtis takes off. Nina tells her that Curtis found her daughter. At Kevin’s, Ryan tries to keep Laura from making out with him by insisting he has a cold. He says he’s going to work but she begs him to play hooky. Laura hands him a gift. It’s a photo of them in Paris. She tells him to get his tie on. Lulu shows up. Ryan decides to escape and walks off without even kissing Laura. She tells her daughter about her disappointing homecoming. She’s sure he must have something wonderful planned though. They sit down, and she talks to Lulu about Spencer and Dante being away. Lulu tells her that she’s hit a few bumps as a journalist. As they talk about the Ryan story, Laura is surprised when her daughter tells her how much Kevin has told her about the case.

More: GH blog on secrets coming out fast and furious Drew and Kim are at the hospital discussing their son. They are sure he’s in shock, but Drew is also sure he’ll realize he needs his family. They go to Monica’s office to speak with her. Kim explains that her son has a brain tumor. They explain what treatment they are seeking for him and Monica promises that they will get him through this. After Kim exits, Drew admits to Monica that he’s not prepared for this. She assures him they can fight this together. Down the hall, Carly chases Ryan down. She tells him she’s ready for therapy and wants to start as soon as possible. When she mentions Morse code, he suggests she forget the Ferncliff patient. She reminds him the anniversary of Morgan’s death is coming up and she needs to prepare herself. He apologizes and offers to work her into his schedule. As he heads off, Carly walks over to Kim and tells her that Oscar broke up with Joss. Kim can’t tell her anything. Meanwhile, Drew runs into his son. They talk about why he’s not in school. Drew thinks he should still be making plans for his future. Oscar insists he’s dropping out. Up the stairs, Felicia corners Ryan in a hallway and asks if he has a minute for her. She senses he’s a little off. He asks her to his office so they can have some privacy.

Sonny has words with Ava.

Kristina tries to be helpful.

Maxie has some doubts.

Ava Bonds With Ryan as Kiki and...