Tuesday October 2, 2018: Laura senses something wrong with Kevin, Oscar dumps Joss, and the DA turns to Drew for help. 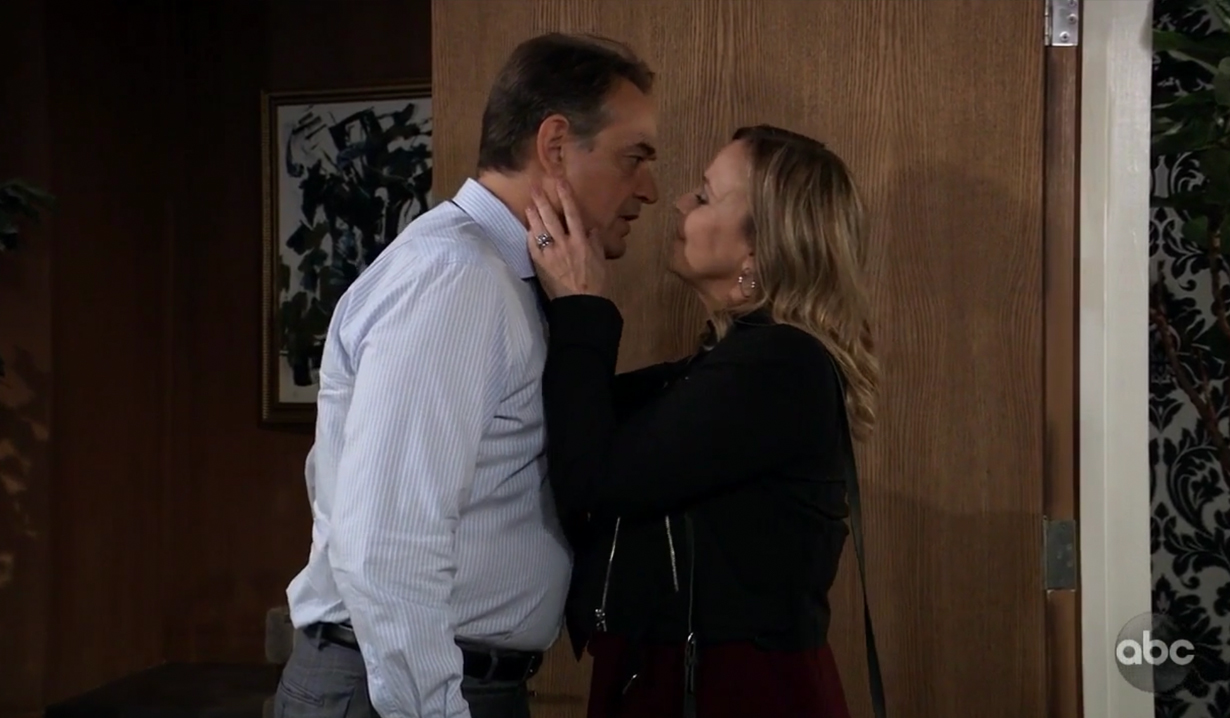 Jason visits Carly at home and they discuss Mike and the gun. Even if Mike threw it in the river as he recalls, Jason fears Sonny isn’t in the clear. He worries the DA could exploit Mike’s disease to get Mike or Sonny to crack.

In the PCPD interrogation room, Margaux tells Jordan she plans to use Jason to nail Sonny, but Jordan warns her that he’ll never crack. Morgan gets an idea and rushes off. Out in the squad room Lulu returns Chase’s watch to him, which he left at her house when he came over for dinner the other night. Valerie arrives because Jordan wanted to have a word with her. Chase suggests she have a seat. Later Jordan congratulates Valerie on passing her detectives exam. Jordan introduces her to her new partner, Detective Chase. Lulu is taken aback that she’ll be replacing Dante. At GH, Kim and Drew explain the trial to Oscar, but he sees it as pointless because he’s still going to die. Kim and Drew encourage him to talk to someone, even if just a friend. He refuses to let anyone else know about this. Oscar leaves, and Julian approaches Kim. Drew excuses himself, and Julian lets Kim know whatever is going on that she can tell him. Kim can’t because it is Oscar’s business. She feels they need to take a break because she needs to focus on Oscar right now. Julian refuses to step back. He insists he will be there for her and won’t pressure her to tell him anything before she’s ready. She thanks him for understanding. Elsewhere, the DA approaches Drew and reveals the body in the pub that she suspects Sonny killed turned out to be her long-lost father. Drew is sorry for her loss. She knows she may not be able to punish Sonny for her father’s death, but she can nail him on other crimes which he knows about. Drew again states he won’t help her take down Sonny. Margaux ponders the flash drive with Jason’s memories on it. At Crimson Valentin reveals to Nina that he’s located her daughter, who is alive. He explains how he convinced Madeline to tell him the truth about what happened to her child, and he hired Curtis to locate her. Her name is Sasha Gilmore and he shows her a photo of the young woman. He explains they had two DNA tests done, and the first indicated a match. He asks if she’d like to reach out to her. Nina has to process everything and wants to wait to see if the second test is also a match. She asks to be alone but thanks him. Ryan is stunned to find Laura at his door. She takes “Kevin’s” face into her hands and kisses him. He doesn’t immediately embrace her, which she questions, and he explains she simply caught him off guard. Laura tells him that Spencer is better and felt she was cramping his style, so she caught the first plane home. He asks how long she’s staying, and she replies, “Forever!” Ryan takes her suitcase upstairs and returns to find her examining the rope he bought. He says it was part of a failed do-it-yourself project. Lucy arrives with chicken soup for “Kevin” and is surprised that Laura is there but welcomes her home. Laura quickly sends “Kevin” to the kitchen with his soup, so she can have a discussion with Lucy. Laura heard she has been arranging for “Kevin” to spend time with her, Mac and Felicia. She appreciates what she was doing, but she is home and she sets some boundaries between Lucy and her husband. Ryan returns and asks if everything is okay. Lucy assures him everything is fine, and she has to be going. Once alone, Laura decides to show “Kevin” how much she missed him. When he pulls away she wonders what is going on with him. He claims Lucy was right about one thing and he seems to be coming down with something. They settle in on the couch and Laura remarks, “It’s so good to be home.” Ryan agrees. Oscar arrives see Joss at the Corinthos home. Carly calls her down, and they talk out on the porch. Joss knows something is wrong. Oscar shocks her by stating they need to break up. She is confused and demands an explanation, but he simply states he needs space and storms off. Back inside, Jason and Carly continue to discuss how to deal with the DA. Carly suggests they dig up dirt on her father and reveal he’s as crooked as they come so she has no motive to avenge his death.

Nina asks Curtis why he didn’t tell her what his case was about.

Felicia explains to Maxie she’s worried about someone.

Ryan tells Laura that he’ll find a very special place for a photo she gives him.

Carly assures Joss whatever is going on with Oscar has nothing to do with her.

Oscar confirms to Cam that he has cancer.

Mike Remembers Where the Gun Used to...

Nina Gets Confirmation That Sasha is...