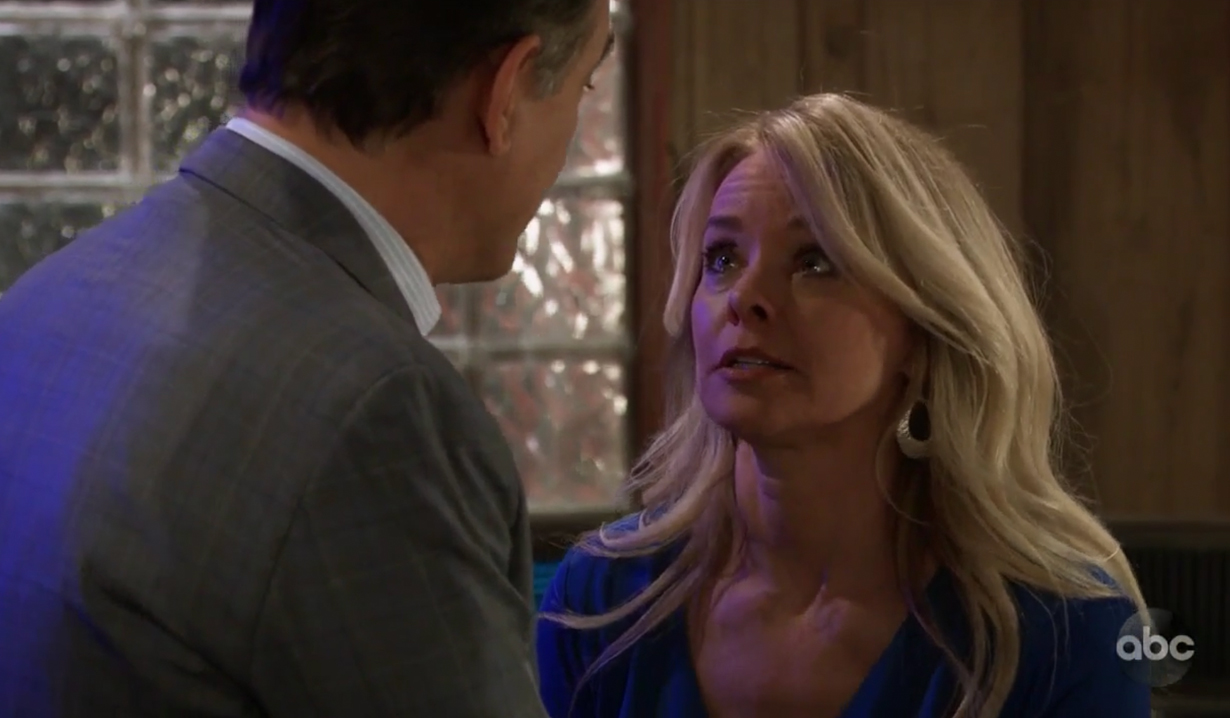 Lucy meets with Mac at The Floating Rib, where she’s arranged a meeting with friends. At the bar, Ava gives Franco a commission check for some of his paintings she sold. At her place, Chase informs Anna that the WSB has a lead on Obrecht. but has no more details. Chase leaves, and Finn guesses that Anna is going to go after Obrecht and knows he can’t stop her.

In the halls of GH, Peter asks “Kevin” for his help dealing with his stress. Elsewhere, Kiki spies Griffin and wonders if he’s back, but he is just there for a quick meeting. Griffin walks off, as Maxie approaches Kiki with a proposition to appear in Crimson. She wants to put her in a fashion spread to serve as an inspiration for other women dealing with sexual harassment. Maxie spots Peter and “Kevin” walk by, so she rushes over and hopes Kevin is getting Peter the help he needs after his panic attack. “Kevin” is happy to help Peter, suggests he make an appointment, and excuses himself because he has to meet Maxie’s parents for lunch. Maxie inquires how Peter is doing, but he insists it’s better for her if he stays out of her life. Meanwhile, Kiki catches back up with Griffin and offers to take him to lunch at The Floating Rib, which he agrees to. Felicia briefly meets with Lulu at Kelly’s for an interview about the Ryan Chamberlain murders. Felicia believes the victims should be remembered, not Ryan. Felicia also wants to be known not as Ryan’s victim, but a survivor.

More: Interview with Kelly Monaco on 15 years at GH At Sam’s, Jason informs Sam that Oscar told him he’s dying. Sam is shocked because she was unaware Oscar knew. He catches her up, and Jason knows he has to be more present for Monica during this. She agrees and wonders why they have to keep having to remember how precious time is. They both agree not to take each other for granted. Back at The Floating Rib, Franco senses something is eating at Ava. She tells him about discovering Griffin at Kiki’s place and exploding on her daughter. Ryan arrives and spots Ava at the bar and mistakes her for Felicia from behind, telling her how beautiful she is. He apologizes and makes his way to Mac and Lucy’s table. Felicia arrives and gives “Kevin” a big hug. Mac asks Felicia how the interview went, and Felicia is just glad Ryan is gone and she never has to worry about him touching her again.

Griffin stops by Anna’s for advice because he’s feeling lost. Anna suggests he stop running away from things and figure out what he should be running towards. Chase finds Finn at GH to talk about their dad. Finn promises he is looking into the case, which eases Chase’s fears. Peter walks by and overhears Chase and Finn discussing Anna going after Obrecht. He questions Finn about the matter, and Finn chides him about the number of times Anna has to risk her life to protect him. Later, Peter calls Anna and tells her to stay safe. Elsewhere, Lulu runs into Maxie. Lulu was planning to look into Ryan’s records but found out she needs Kevin’s authorization first. Maxie wonders if Lulu didn’t by any chance advise Peter to steer clear of her. Lulu admits she may have suggested Maxie was going through a lot and he was causing her some confusion. Maxie tells her to butt out, and Lulu notes the point as taken. Maxie runs into Peter on her way out, and he warns her about Obrecht and suggests Nina know about her aunt. Maxie asks if Peter is safe with Obrecht on the loose. He explains that Anna is going after her, which Maxie notes is good because Anna will do everything she can to keep him safe. Maxie departs to get back to work. Elsewhere, Anna meets with Finn and assumes he is to thank for the voicemail she received from Peter. He thinks this is a good sign and Peter has come a long way from wanting her dead.

Back at The Floating Rib, Ava vents to Franco about how she’s done with Kiki, who suddenly walks into the bar. Griffin arrives right after and suggests they go elsewhere when he spots Ava. Kiki refuses and they grab a table. Ava fumes and Franco advises her to calm down because at some point he knows they’ll work things out. Ava isn’t so sure this time and vows whatever happens that Kiki asked for it. At their table, Lucy starts to notice “Kevin” is acting odd and thinks he may be coming down with a cold. Felicia and Mac decide to head out, and Lucy insists on taking care of “Kevin” because he’s not himself.

Nina rants to Lulu that she can’t get past the Peter thing.

Ryan looks at Lucy and says, “There really is no getting rid of you is there?”

Mike informs Carly that they need to talk about what happens next.

The DA and Jordan question Jason. The DA thinks Sonny killed her dad and Mike cleaned up after him. 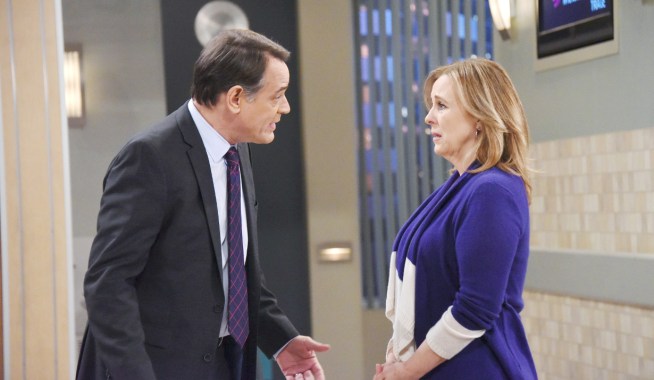 Mike Remembers Where the Gun Used to Kill Scully Is 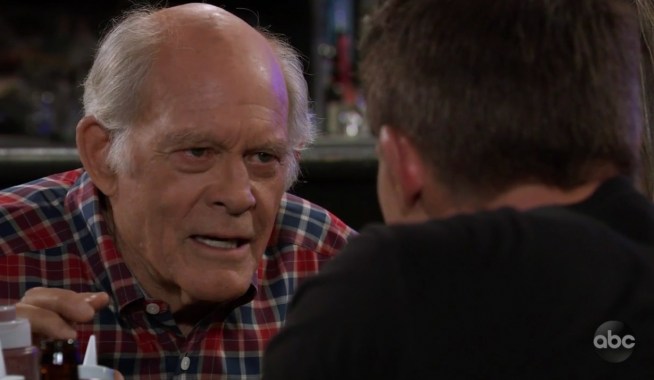