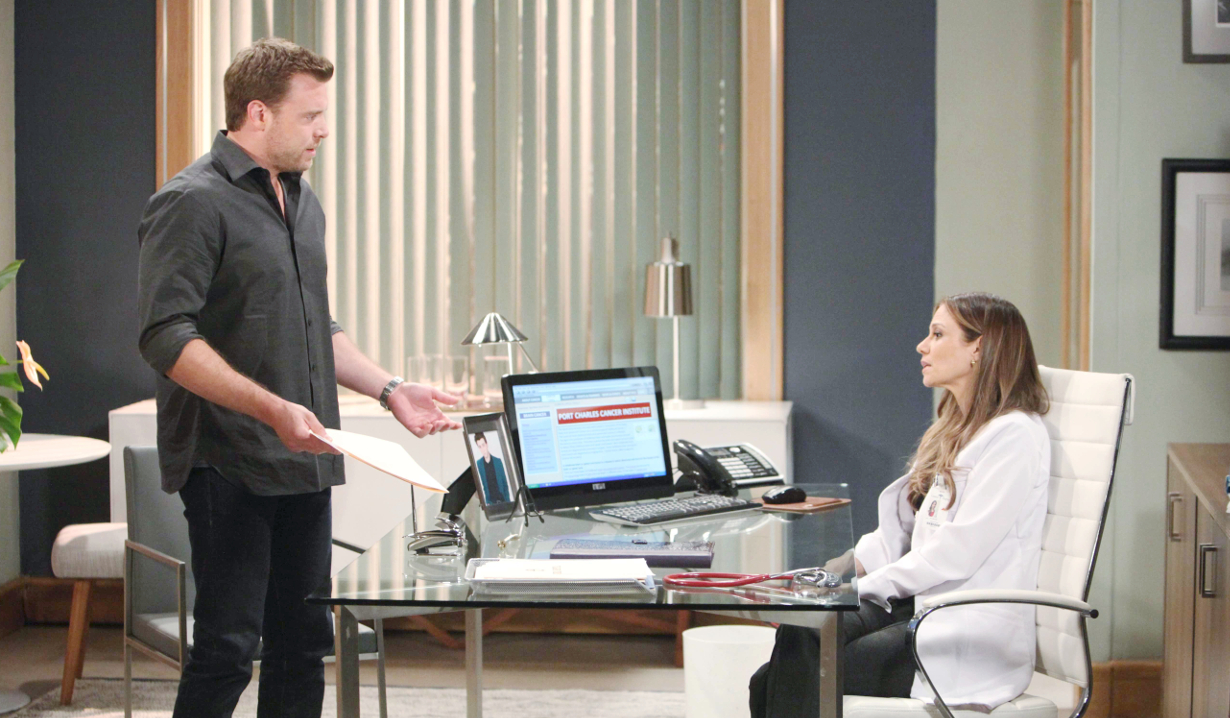 Carly comes down the stairs of the Corinthos compound and tells Jason about how oblivious men are. He fills her in on Sonny being questioned about the body. Things are getting worse and it doesn’t look good for Mike. Remembering what happened has been hard on him, but he can’t remember what he did with the gun. Jason adds that they also need to worry about the DA being the dead man’s daughter. That blows Carly’s mind. Jason tells her she has to behave herself because the DA will be using every opportunity to go after the family. The topic turns to Wiley and his condition, just as Michael walks in with cookies. His mom explains the baby has the same heart condition he had. Michael points out there are less than 200,000 cases a year. They recall Jason having to call the shots for Michael when he was a baby and how scary that was. Valentin meets with Curtis on the docks. The PI had the tests expedited and they’ll soon know if Sasha is Nina’s daughter. The deeper Curtis digs, the more uncomfortable he gets. He thinks Nina needs to know she has a daughter somewhere. The Cassadine insists they will tell her when they have more information, but Curtis accuses him of trying to use the child to orchestrate a reunion. Valentin refuses to do anything until they get the results. Telling her there’s a daughter without any idea of where she is will only cause Nina agony. Brad rushes into Charlie’s, eager to talk to Julian. Brad is sure that Lucas is going to get the truth about Wiley. He explains that Wiley’s heart problem has been found so it’s only a matter of time until the dominos fall. Julian points out that Wiley could have inherited the condition from his birth father. This doesn’t calm Brad down. He begs Julian to plant the condition in the record. Julian advises him to do nothing since meddling will only raise suspicions. Across the room, Charlotte and Nina sit at a table, fresh from boutique shopping. Charlotte worries that this will be the last time they do this. Nina explains that she won’t be living with her any more. The little girl asks why she doesn’t love her papa anymore. Nina explains that there were some things they couldn’t agree on and then changes the subject. Charlotte wishes Nina had a baby with Valentin. Upset, Nina heads to the bar, where Brad is still worrying to Julian. When she returns to Charlotte, the girl notices that half the heart on her necklace is missing. Valentin walks in and joins them. When his daughter runs off to wash her hands, the adults discuss the divorce until the girl skips back. Nina takes off but stops to watch them through the window. Jordan joins Stella at the Metro Court for a drink. Stella admits that things got overheated at the therapy session. Jordan apologizes for being brutal. She wants to clear the slate and start fresh. Stella refuses to forget she’s the reason Thomas is dead. The commissioner begs her to set aside their differences so they can give Curtis and TJ they family they deserve. Stella can’t do that. She’s constantly haunted by Thomas’ death. Jordan accuses her of being a hypocrite for refusing to fix her family when she fixes families for a living. That enrages Stella and she announces she’ll be working on the wedding day. As she heads for the door, she bumps into Curtis on the way and informs him she won’t be attending the wedding. She’s sorry and exits. He sits down with his fiancée and she fills him in on what happened. He’s proud of her for trying. She wonders of he can live with his aunt shunning them. Taking her hand, he says he loves her and a lot can happened between now and the wedding. At the hospital, upset Oscar asks his mom what will happen to him. Kim confirms that his cancer could be fatal. The parents hug him, but he steps back. His mom admits she should have told him about this. Kim explains they can submit him to a trial treatment and Drew promises that they will be there for him and help him figure it out. Oscar asks his mom when she learned he has cancer. She’s evasive and claims she just wanted to protect him, but he accuses her of trying to protect herself. Drew takes her side, but this only makes Oscar hate his mom. Kim admits she made Drew wait to tell him the truth. They moved to Port Charles because she discovered he had family there, but she had no idea it included his father. None of this is making Oscar feel better, who accuses them of cruelly deceiving him. He tries to leave but his mom holds him still until he breaks free and runs. Drew tries to comfort tearful Kim. Oscar heads down the hall and collapses in tears in the elevator.

Sam stands up for Alexis.

Julian has something to be annoyed by.

Kim and Drew stay up all night. 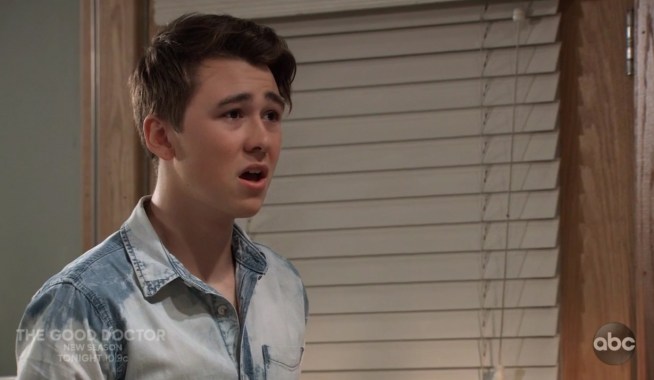 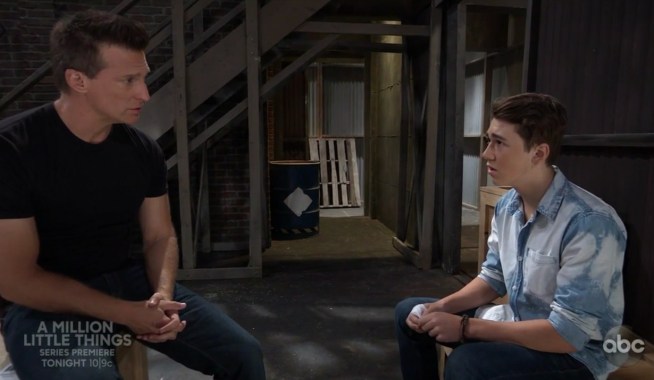