Nina Realizes Her Child Is Alive

Friday September 7, 2018: Valerie returns with news for Julian, Mike insists on fixing things, Curtis interviews the man who brokered the adoption of Nina's daughter, and Drew leans on Sam. 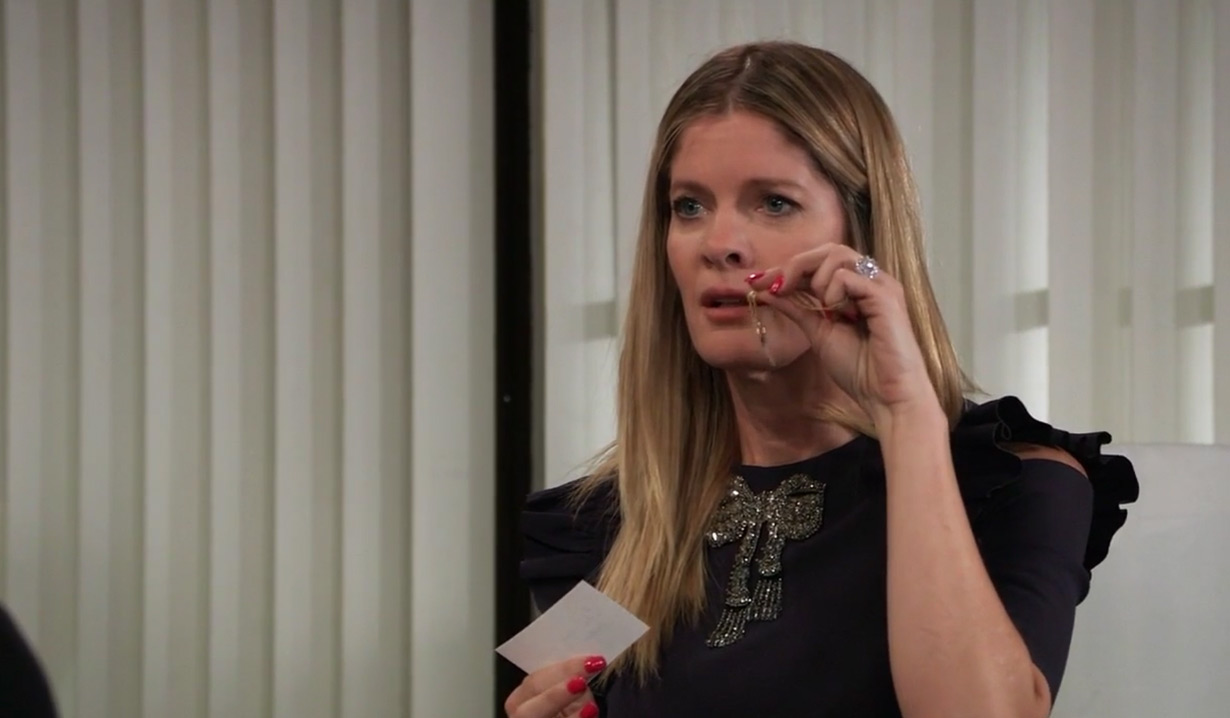 At Sam’s, Jason and Sam discuss Danny and school permission slips. Drew arrives wanting to see Scout. Sam invites him in, and Jason explains he was just leaving, but asks how Oscar is. Sam asks if something is wrong with Oscar. Jason explains he took him to the ER after he passed out. Jason leaves, and Sam asks Drew what is really going on. Drew just wants to spend time with Scout. He holds his daughter and opens up to Sam about Oscar’s tumor, and that he and Kim have a difference of opinion. While Kim wants to keep it from their son, Drew believes Oscar has a right to know. Sam sees Kim’s point because once you know the truth it’s hard to unknow it. Drew hates keeping the secret and knows he is going to lose his son. Sam urges him not to give up hoping for a miracle and to spend as much time with Oscar as possible. At Sonny’s place, Mike asks Sonny how much trouble he’s made for him. Sonny tries to put him at ease, but Mike promises to clean up the mess he created all those years ago. Sonny assures his dad he will handle this and for his dad to stay out of things. Later Jason arrives, and Mike convinces Sonny to let him go to his appointment with his nurse on his own. Mike leaves the room, and Sonny gets a call that Julian’s permit has been approved. Jason feels they can still control the situation by forcing Julian to use a crew of their choosing. Sonny fears things could still go wrong. At Charlie’s, Kristina fills out an application, but Julian doesn’t want to make any more waves with her father by hiring her. She won’t take no for an answer and jumps into work to prove herself. Valerie arrives to let Julian know the city has approved his permit for renovation. Val is surprised to see Kristina, who explains she’s moved back to town. Julian asks Kristina to keep an eye on the bar for him while he takes care of matters involving the permit. Valerie asks Kristina why she’s back, so Kristina explains her breakup with Parker. Val is sorry but is glad she’s home because she’s missed her. In New York, Jordan arranges for the lawyer Curtis needs to question to be brought by their hotel room. Later Carter Buckley arrives, and Curtis questions him about Madeline Reeves. Carter claims he doesn’t know her and is obligated to protect his clients. Jordan reminds him his companionate release can be revoked if he aids and abets another crime, so Carter admits he helped Madeline hire a doctor and nurse to care for Nina and later helped put the daughter up for adoption. He swears he doesn’t know who adopted the child and he destroyed the records years ago. Carter leaves, and Curtis thinks the nurse and doctor could know something. At Crimson, Nina receives a large package from her mother’s lawyers. She opens it and it is a bunch of items from her childhood such as clothes, blankets and toys. She finds a photo of her and Nathan as a baby, which Madeline framed. Her mother’s jewelry box is also among the things, and there is a note from Madeline. The note reads, “This will mend a broken heart.” Nina discovers a heart pendant with the note, which she was obsessed with as a kid because it reminded her of her favorite Broadway show Annie. Maxie notes only half of the pendant is present and asks where the other part is. Nina doesn’t know why her mom would cut it in half, or where the missing piece is. Nina thinks about the significance of the locket in Annie, and realizes this is a sign that her child is alive. Joss takes Oscar to the park to surprise him with the decorated bench, which is a little worse for the wear after sitting there overnight. Joss realizes there is still a lot they don’t know about one another but have all the time in the world to learn. Oscar suggests they come up with a bucket list and they can scratch one off for each anniversary to come.

Mike sneaks off to Charlie’s and spies through the window. Inside Val has to get going because she needs to study for an exam for a promotion but promises to return to celebrate with Kristina once she passes. Later, Julian reluctantly hires Kristina. Meanwhile, Mike sneaks into the basement, finds a gas line and grabs a wrench.

Nina is hopeful her child is alive.

Michael tells Carly that Nelle wrote him from prison.

Jason and Sonny discuss the gun buried with the body.

Kristina finds a confused Mike at Charlie’s and wonders what he’s doing.