Cassandra Escapes Only to Find Herself Someone’s Prisoner 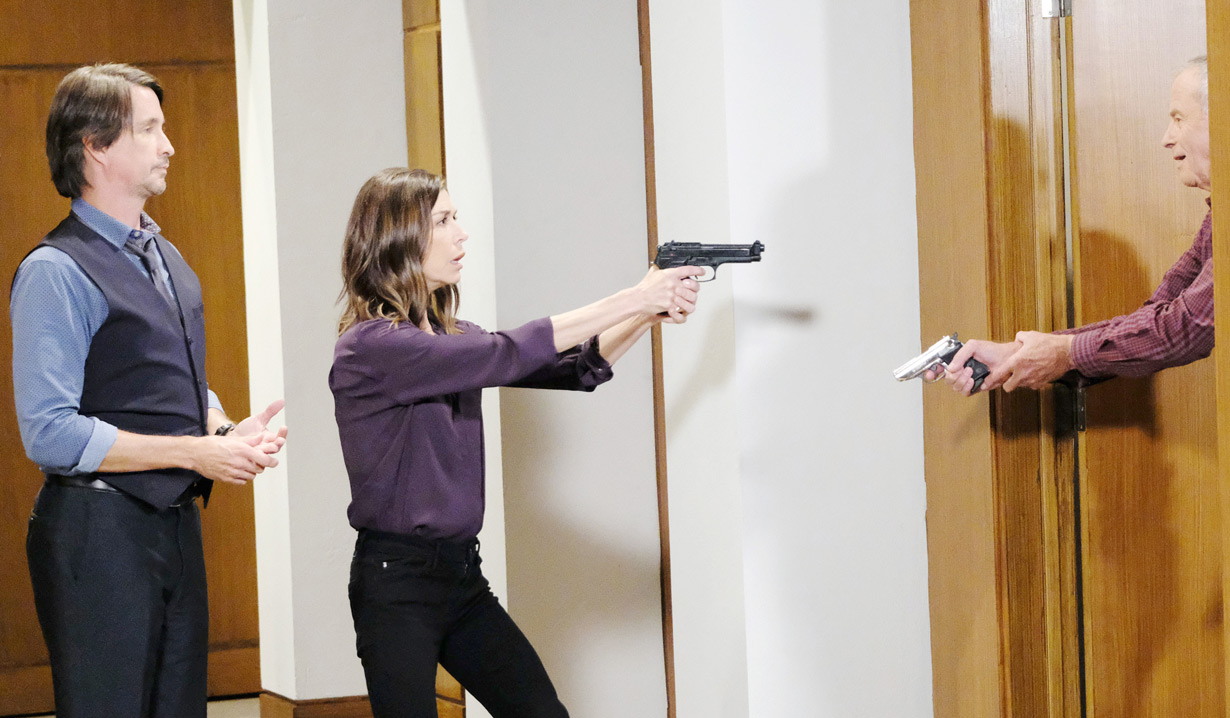 At home, Sonny and Mike watch a baseball game on TV with Felix. Mike suggests they go outside and play catch like they did when he was a kid. After a quick game, Mike excuses himself to rest, and Sonny confesses to Felix his dad is remembering playing games of catch with him that never happened. Later that evening, Mike wanders into the living room and has another episode. He thinks Sonny’s guard, who is out on the patio, is a burgler so he triggers the house alarm. Jason and Carly continue shooting pool at The Floating Rib as Drew and Margaux come in for their second date. She thinks Drew is getting over Sam. Jason hopes Drew knows what he’s doing because the DA does. At their table, Drew asks Margaux about herself. She tells him she’s a jersey girl and married the wrong guy after college. He came from a good family and money and wanted nothing more than to maintain the status quo of a good life. She was the girl from a country club he met and wanted more. She asks about him, and he reminds her that he has no memories before 2015. Drew goes to get them some margaritas. Jason approaches Drew at the bar and warns Drew again that Dawson is out to get Sonny and is likely using him and his memories. Drew let’s Jason know what the DA wants is to get Jason to flip on Sonny, and she’s using him to make it happen. Meanwhile Carly makes small talk with the DA, who gives Carly her condolences on Michael’s loss. The pleasantries quickly fade, and Carly not too subtly accuses her of using sex to get to Drew in order to gain the information she’s after on Sonny. Jason and Drew intervene and see the women to their separate corners. Jason worries Drew could be a liability, but Carly thinks he can take care of himself because he has Jason’s skills to draw on. Back at their table, Drew purposely squirts Margaux with BBQ sauce, which she thinks is payback for the mustard. Her shirt is ruined, so she suggests he take her home. After they leave, Carly begins to worry Drew could fall for Margaux’s games. Jason knows it would be hard for even Drew to locate what little evidence is out there against him and Sonny, and besides they have Diane on their side.

At the PCPD, Chase gets a hit on a big drug purchase using Finn’s prescription code north of the Canadian border. He and Robert take off. In the clinic, Cassandra agrees to help Anna and Finn and pretends to be in a coma when the kidnappers return. Finn concocts some formulas for them to drink to counteract Cassandra’s infection, which knock the thugs out. Anna and Finn tie them up, but Cassandra recognizes neither of them. Anna and Finn scout for a way out and run straight into Robert and Chase. They bring each other up to speed and return to the room to find Cassandra is missing.

Ava and Julian spend time in the park with Leo, who is catching butterflies. Griffin jogs through the park, so Julian takes Leo elsewhere. Griffin confronts Ava for her part in getting him suspended, which she comes clean about. She did it to make him hurt the way she hurts. Griffin lets her know it worked and he won’t bother her anymore. Suddenly Julian rushes with Leo in his arms. Leo fell from a tree and hasn’t been responding to him. Griffin takes a look at the boy, who simply had the wind knocked out of him and quickly recover. Ava teases Julian was more scared than Leo and asks her brother if he needs a security blanket. Leo pipe’s up, “Like the yellow blanket in Jonah’s room!” Julian covers by saying they were discussing packing up all of Jonah’s toys and blankets earlier. Julian leaves with Leo, and Griffin calls Ava out about the blanket.

Drew takes Margaux back to her room at the Metro Court, where she excuses herself to change her blouse. While she’s out of the room, Drew looks around and finds a flash drive among her papers. When she returns and sees him with it she blurts out, “Don’t touch that!” Drew asks if it is important. Cassandra awakens in the backseat of a car. She asks the person next to her, “What do you want from me?” The man’s hand grabs hers and is wearing a ring with the Cassadine crest.

Back at Sonny’s, Jason and Carly burst in as the alarm is going off and Mike is having a meltdown. Jason has his gun drawn, Sonny appears with his drawn, and his guard does as well.

Margaux agrees to tell Drew everything.

Griffin yells at Ava, “You helped send Carly to Ferncliff!”

Sam confronts Kristina about what is really going on with her.

The situation with Mike continues to escalate.

Kevin Visits His Brother in...

Stella, Curtis, and Jordan Fight in...