Kevin Visits His Brother in Ferncliff on Their Birthday 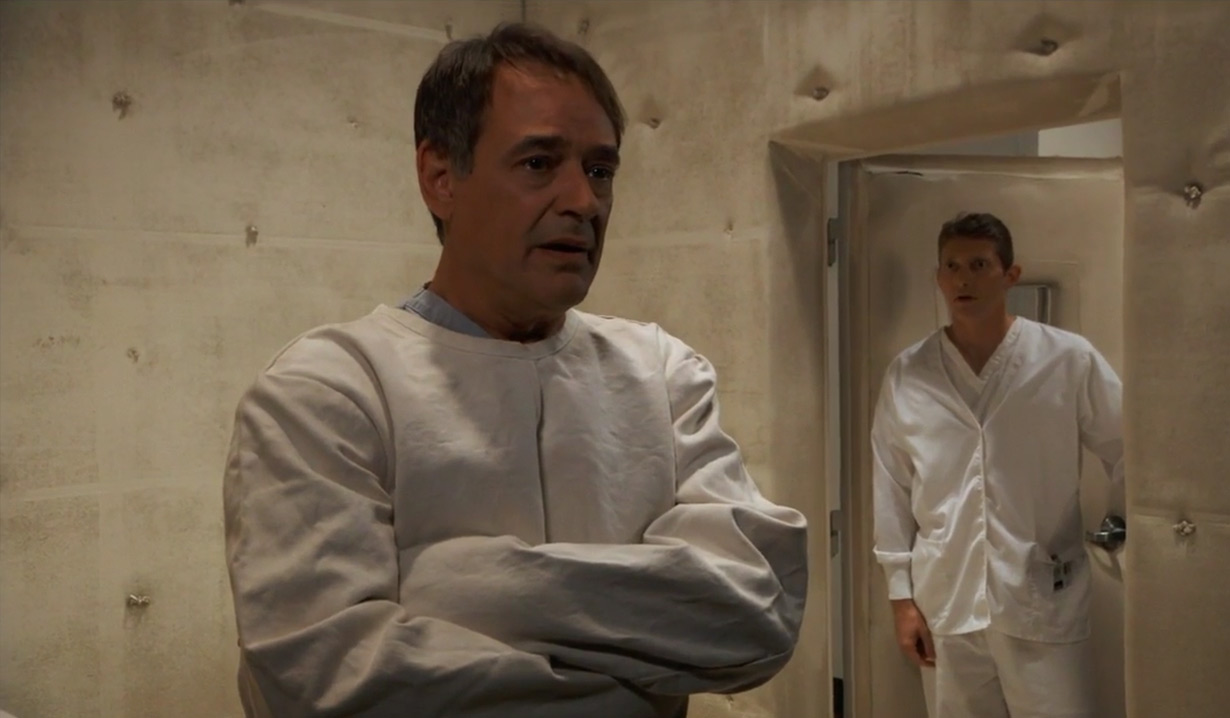 Carly and Jason shoot pool at The Floating Rib and discuss current events. At the bar, Lucy finds Kevin drinking and can see something is bothering him, and wonders if it is his birthday. He claims he is just preoccupied with work, but she knows when he’s hiding something. He politely asks her to butt out because he has other people in his life he shares his private issues with now. Carly and Jason interrupts and Lucy leaves. The three chitchat about the events at Ferncliff. Carly is worried about the patient who was next to her. Kevin assures her the entire staff has been replaced and he is seeing to that patient. Later Lucy returns with a cupcake as an apology for overstepping. He tells her it’s okay and thanks her. Meanwhile, Jason admits to Carly that he doesn’t trust Kevin after he turned him into Mary Pat. Carly does because he looked out for her in that awful place. At GH, Franco assures Liz that he is sure everything will go fine today, but Liz has doubts. Franco leaves, and Kiki and Liz catch-up. Bensch arrives and scolds Kiki for standing around talking instead of working. She wonders how he is still employed. Suddenly he is summoned by Monica, and later returns with a box grumbling he’s been fired. Kiki says he won’t be missed, but he assures her this isn’t over. He is suing GH and Kiki for defamation of character and will get his job back, or take this whole place down. At the PCPD, Robert meets with Jordan to brief her on the latest regarding Anna and Finn’s kidnapping. Chase bursts in on their conversation and is upset nobody told him his brother has gotten wrapped up in a WSB case. He wants in on the investigation, so Jordan makes him the PCPD liaison with the WBS. Robert is less than pleased but briefs him on Cassandra’s kidnapping and the belief that Finn was abducted to treat her. In the mystery clinic, Cassandra is brought in to a room for Finn to treat. Finn looks over her charts and claims the virus has mutated and she could be contagious. He sends the kidnappers off with a list of medications he will need, which was a bluff to get them to leave. Finn concocts a serum that brings Cassandra out of her coma. Anna explains to her that they’ve all been kidnapped and need to work together to get out of this alive. Cassandra doesn’t believe Anna, who tells Cassandra she’s been in a coma for eight months with a rare virus of her own creating. Finn cracks that she finally got that rare disease she always wanted. Anna asks her to pretend to be unconscious and see if she recognizes their kidnappers and their employers. If she can help them then Finn will treat her, otherwise he can just as easily put her back into the coma. In Ferncliff, someone who looks like Kevin is in a padded room and straight jacket. He screams until Gordon, an orderly arrives, and insists he isn’t supposed to be here and is a prisoner. He cries there is a very dangerous man loose in Port Charles and is running around destroying the lives of everyone he loves. Gordon asks if he can do anything for him. The man tells Gordon not to tell anyone they spoke, especially his doctor, who will kill him if anyone finds out who he is. Later, Kevin arrives to visit the patient. He holds up the cupcake Lucy gave him and says, “Happy Birthday brother.” Franco, Cam, Aiden and Jake stop in the park for soda and pretzels. Franco realizes they need to actually do some shopping as their mother wanted. Aiden is eager to get some Princess Calinda of Everwood pencils. Cam says those are for girls and if he buys them he’ll get beat up. Upset, Aiden runs off, and Franco goes after him to give him a pep talk and tell him it’s okay to like whatever he likes. They return to Jake and Cam, and due to the time Franco decides to just order their supplies online. He gives Jake and Aiden money for ice cream, and once alone with Cam tells him that hurting Aiden like that wasn’t cool. Cam is sorry but believes he was preventing his brother from being bullied. Franco thinks that his apology sucked. Cam wonders if all the family members of the people he hurt and killed accepted his apology. Franco says they aren’t talking about what he’s done, but what Cam did to Aiden. Cam reiterates that he was preventing Aiden from being hurt, because kids don’t listen to lectures from teachers about being polite and respecting differences.

Anna asks Cassandra if she will cooperate or not.

Ava tells Griffin that she wants him to hurt like she does.

Margaux wonders to Drew if it’s hard to believe she’s interested in getting to know him.

Carly warns Jason that Margaux is looking for evidence against him.

Cassandra Escapes Only to Find...