Nina Gives Valentin Her Decision Regarding the Divorce 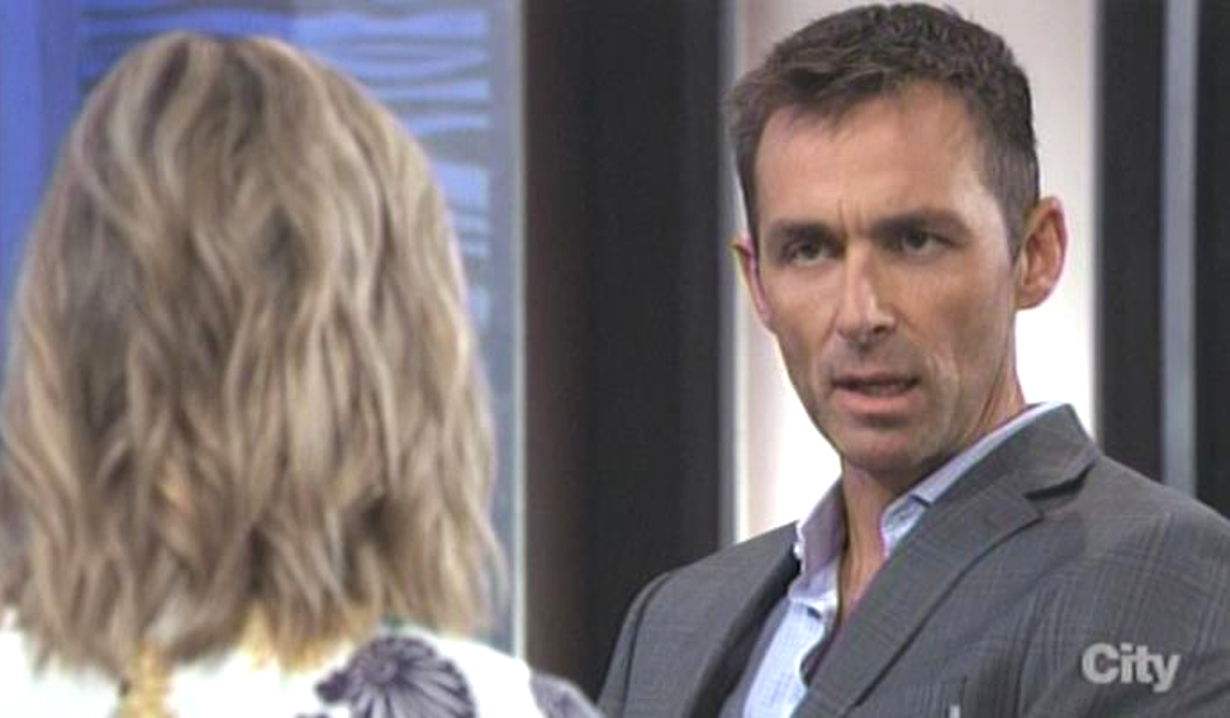 At the Metro Court, Peter corners Margaux at the bar while she looks at The Invader. The cover features a picture of her kissing Drew. Peter informs her that he’s the publisher. She accuses him of having no scruples. Across the room, Lulu tells Maxie and Nina that Peter offered her a job, but she turned it down. Lulu strolls over and tells Peter she doesn’t want to be part of his ‘fake news’ and clomps off. Back across the room, Valentin arrives and asks to speak with Nina. Maxie tries to dissuade him, but Nina points out that it’s the end of the 30 days he gave her to change her mind about the divorce. He tells her what torture it has been to live without her. Maxie hopes she’s not falling for this. Nina tells her husband that she can’t get over what he did to Peter and she is still filing for divorce. She runs from the room. Maxie mocks him and he accuses her of punishing him for what Peter did. He talks about how much he loves his wife and wants to make her happy. Valentin asks her to stop using Nina to get her revenge. After he leaves, she approaches Peter at the bar. She trashes his new paper and he wonders why she is so upset he offered Lulu a job. Maxie says she and Lulu are in a decent place now. At The Floating Rib, Drew is surprised when Curtis shows him the cover of The Invader. Drew explains that the DA asked him to help her bring down Sonny and then kissed him. He’s sure there is something going on with her and points out that he still has Jason’s memories and knows where the bodies are buried. With some prodding, Drew admits he thinks she’s interesting. Curtis urges him not to be too stubborn. Drew insists he knows what he’s doing. Once Curtis leaves, Lulu pops up and asks Drew to save her job. She explains she’s been demoted to puff pieces. The editor also told her that she was grateful for Lulu’s stories about people she knows but she needs to work a hard news beat. Lulu asks him to help her out, but he suggests she work hard instead. After she leaves, Margaux strolls in and they talk about their kiss making the papers. Drew asks her to join him. They discuss her first conviction. He interprets this as meaning she’s a lawyer first and anything else second. Julian stands outside the door of Diane and Alexis’ office and eavesdrops as they discuss the adoption. Diane says the odds of Brad and Lucas keeping the child are slim. After they leave, Julian sneaks into the office and photographs the adoption case file. Later, Diane returns to her office and Nina joins her, eager to get the divorce papers signed. Diane notes that Nina seems to have reservations and she doesn’t need to go through with this now. Undeterred, Nina sits down and signs the papers.

Lucas and Brad bring the baby into the hospital and tell Kim that he may not be theirs for much longer. Later, Julian shows up and tells her how hard things are for his son and Brad. He wonders what kind of a person would ruin their lives like that. “A mother,” Kim explains. He appreciates her perspective.

Valentin meets with Curtis at a coffee shop. He has a job for him. Curtis is reluctant to help anyone who has hurt Nina, but Valentin explains that she’ll be the only one to benefit from the job he’s offering. He’s learned Nina’s daughter is still alive and needs help finding her.

Lulu returns to the Metro Court, where Maxie and Peter are still talking. Lulu asks Peter if his job offer is still on the table. It is so she takes it. Maxie is startled and gives them both a concerned look. A sad Michael goes to the Corinthos compound. Sonny joins him and his son tells him how peaceful the memorial service was. Michael didn’t know how to leave. Giving him a pat on the back, Sonny explains how hard it is to bury people and say goodbye. The longer you dwell on grief, the worse it gets. Michael explains that he has concrete things about Morgan to miss, but he never even heard Jonah cry. They discuss grief and Sonny urges him not to make the mistake he made. He needs to let people help him. They hug.

Brad and Lucas meet with Alexis at her place. She tells them that things don’t look good. Brad runs out, claiming he needs to get something for Wiley. Alexis tells Lucas they need to stay focused so they look stable. Outside, Brad calls Julian and asks him for an update. Julian claims he has a plan. Brad goes back inside and says he’s starting to feel hopeful.

Back at the hospital, Julian looks up the number of the birth mother and makes a call, asking to meet.

Jason gets increasingly worried about Carly.

Finn is forced to think fast.

Michael Buries the Boy He Thinks Is...

Kevin Visits His Brother in...