Michael Buries the Boy He Thinks Is His Son 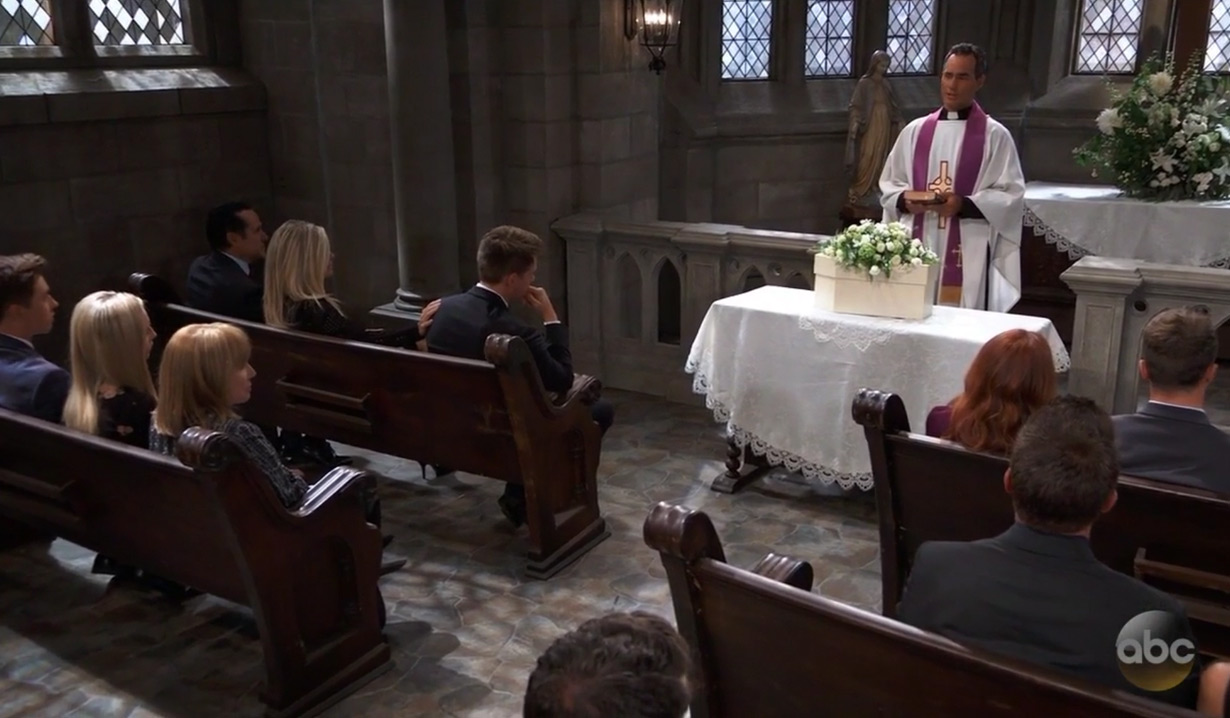 Sam finds Jason sitting alone at the cemetery. Both of them have been thinking about Lila, who will have been gone 14 years this fall. They feel for Michael, who isn’t able to get through this with Jonah’s mother. They remember how they leaned on one another to get over Lila’s death, and flashback to Jason telling her about it. Sam knows she wouldn’t have survived it without him. Inside the church, Carly comforts Michael, who doesn’t know what to say about a baby who never took his first breath. She tells him that he was loved, even if his life was short. The family begins to arrive, including Joss, Lucas, and Bobbie. Sonny left Mike home because he didn’t want him to become confused and worsen things for Michael. Monica arrives and apologizes to Bobbie for not seeing Nelle for who she was, and Oscar gives Michael his condolences. Michael thanks Oscar and suggests he be with Joss, who could use his support. Lulu arrives to pay her respects to Michael, followed by Diane and Max. Chase attends, though is not sure he should be there, but Michael appreciates his presence.

More: The hunt for Nina’s child

At Alexis’ place she looks over the adoption file when Kristina drops by before going to the funeral. Kristina has been thinking how fortunate she is to have a family, and they hug. Alexis realizes how wrong she was to worry about her and Parker, and if Kristina is happy then she is happy. At Charlie’s, Brad is working to set-up for the after-funeral service. Julian asks him about his comment about Wiley’s birth mother and asks whose child he really is. Brad admits the original Wiley died and Lucas has no idea. Brad explains Wiley died in his sleep when they got home, and that he was on his way back to the hospital when he saw a woman on the side of the road with a baby. She begged him to take her baby, because she couldn’t take care of him, and so they switched babies. If Wiley goes back to a woman who isn’t his birth mother, then the truth will come out. Julian offers to see what he can find out about the case. Drew meets with Curtis in the park to discuss what he found on Margaux. Curtis found no red flags on Margaux, and details she grew up in Princeton, New Jersey, but not with money or privilege. She worked hard, went to law school, and had one brief marriage to David Dawson that ended after a year. After law school she worked as assistant DA in Oakland, California, which is near San Francisco, but it was not a high paying glamourous job. Drew surmises she went there for the experience. Curtis says the woman is squeaky clean, he found nothing on her. Drew knows she has an angle and there is something that alluded the background checks. Drew admits he’s going to date her, but only wants to find out what she is hiding. Julian stops by Alexis’ place to try and get information out of her about the case. Alexis says the only thing that will give Brad and Lucas an advantage is if some radical new information comes out. She warns him this is out of his hands and the birth mother will likely be favored. He thanks her for her time and lets her get back to work. After Alexis leaves, Julian trails her. Back at the church, the services for Jonah begin. After the priest’s remarks, Joss speaks about how amazing Michael has been as a big brother, and would have been an amazing father to Jonah. The funeral services conclude, and Michael asks his family to let him go to the gravesite alone. He thanks them all for their support, but he needs to be alone and to say goodbye to his son. Carly and Sonny remain behind alone in the church after everyone has left. They both reflect on Morgan, and now the loss of Jonah. Out in the cemetery, Michael kneels by Morgan’s grave and apologizes that he hasn’t been to visit. He tells his brother about how badly he messed up with Nelle, and could have used him these past few months. He asks Morgan to look after his son.

Family members begin to arrive at Charlie’s for the reception. Joss thanks Oscar for being there for her and apologizes for pushing him away and lashing out at him. Monica appreciates Jason being there for Michael. Jason later tells Sam that Michael chose to go to the cemetery alone. Kristina approaches and tells Jason she’s so glad to have him home safe and is glad Sam has him back in her life to love.

Julian listens outside of Diane’s office. Alexis meets with Diane, who is representing the birth mother.

Brad makes a call about Wiley.

Diane and Alexis continue their meeting. Alexis asks why the birth mother changed her mind.

Julian speaks to Kim about Wiley, unsure how this could happen.

Drew is determined to find out what is going on with Margaux.

Margaux tells Peter that she is off limits.

Maxie wonders what is wrong with Peter.