Michael Holds His Son As Alexis Gets a Troubling Call 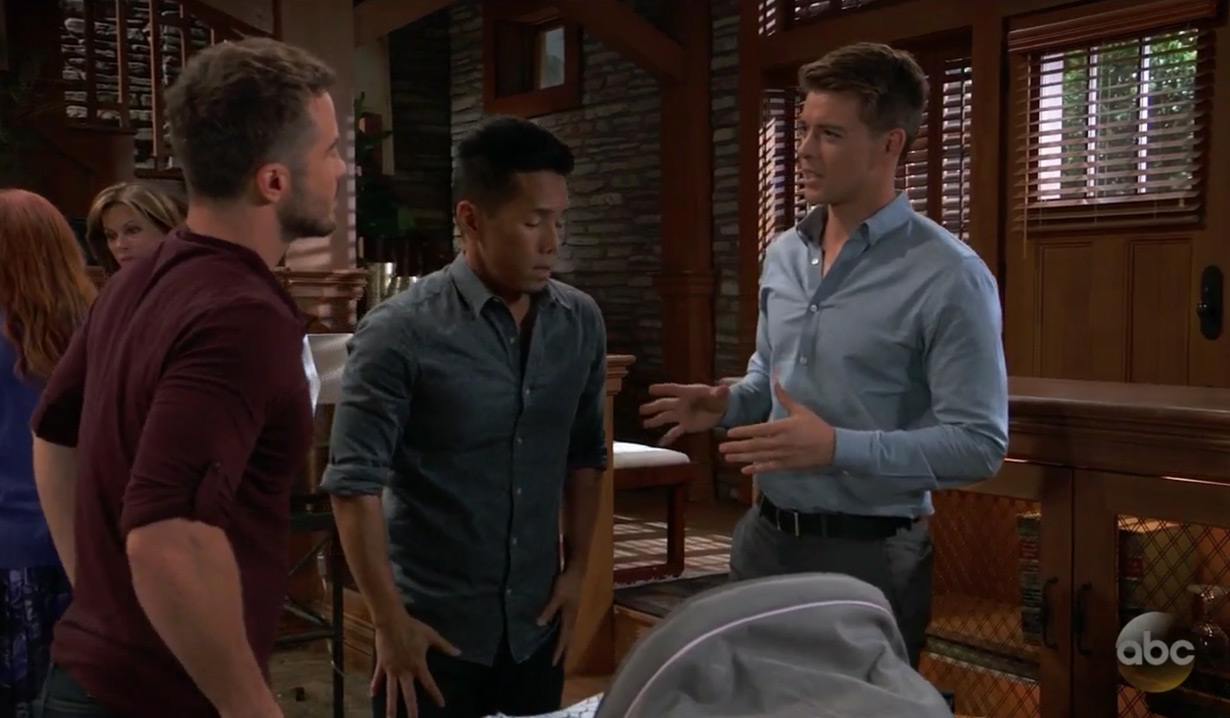 Sonny and Mike arrive at Alexis’ place for the surprise party for Brad and Lucas. Bobbie waltzes in and begs them to call the party off because the adoption isn’t finalized yet and the boys will feel the party is a jinx.

Suddenly Brad and Lucas arrive and Sam and Sonny yell, “Surprise!” Brad and Lucas worry about tempting fate, but Sam urges them to be happy because Wiley is their son. Brad and Lucas agree to enjoy the party. Michael arrives and sees Sonny holding Wiley, and Mike gets confused and thinks the baby is Michael’s and says he looks just like Carly. Michael tells Lucas and Brad he is very happy for the both of them and their new family.

At Charlie’s, a building safety inspector tells Julian he can’t put up his expansion due to an underground fissure. Julian doubts it exists. Meanwhile Drew runs into Margaux and wants to know why she spoke to Jason about him. She admits she wants to use Jason to take down Sonny, and she admits she needs Drew’s help.

Valentin returns home to Wyndemere and finds Peter waiting for him. Peter reminds Valentin that he owes him and he’s here to collect. The two bicker about Peter staying in town and Valentin makes a call and arrangements for Peter. In exchange, he asks Peter to stay away from Nina. Peter agrees.

Nina and Maxie go to Pentonville to see Madeline (played by Donna Mills), who has been pestering Maxie. Maxie admits she only came to honor Nathan, while Nina unleashes her anger towards her mother for all the hurt she’s caused, including costing her the only chance she had to be a mother. Maxie thinks they should just get on with this so they can leave, and she plays some videos of James for Madeline. Madeline cries over the videos, and she and Nina remember back to Nathan when he was a baby. Madeline admits Nina was always great with Nathan, and she is so sorry for all the pain she has caused her. Nina thinks she’s putting on an act, but Madeline swears she’s had years to think over what she’s done. She’s kept up with everything in their lives, and she knows Nina has a handsome husband and a step-daughter and hopes she’s found the happiness she deserves. Maxie believes Madeline is being sincere, and Nina thanks her mother. Madeline tells them there is a chance she may be up for parole, and if they could attest to her remorse her chances would be even greater. Maxie and Nina both realize she played them and want nothing to do with her. Maxie tells Madeline never to contact her again and they walk out.

Julian barges into the party at Alexis’s place to confront Sonny. They go outside to discuss why Sonny is stalling his expansion plans. Sonny claims he has nothing to do with any of his business woes, but Julian vows to find out what the connection between Mike and Charlie is and how that’s related to his troubles. Julian goes back in and apologizes to Alexis for the intrusion and takes a peak at his grandson. He notices this baby looks different from the one at the hospital and goes to pull up the photos he took on his phone. Brad knocks into him, claiming sleep deprivation, and remarks Wiley is just growing so fast and that’s why he looks different. Michael gets a chance to hold Wiley, and Mike continues to mistake Wiley for Michael’s son. Suddenly Alexis gets a troubling call and has to break the news that Wiley’s mom wants him back. Brad looks at Michael, who is holding Wiley.

Back at Charlie’s, Margaux knows Drew has Jason’s memories and where the bodies are buried. She tries to get him to help her clean up Port Charles, but Drew won’t. He doesn’t want to hurt Jason because it will hurt other people he’s connected to, and he warns her that Jason will never turn on Sonny. As they argue over her agenda, Peter walks in. Drew tells her this is all a waste of time because implanted memories will never hold up in court, and there is likely no evidence against Sonny to be found. Margaux stops him from leaving and swears she had enjoyed spending time with him and thought he’d want to help her. She kisses him. Drew’s taken aback, and his less than enthusiastic response sends her running out of the pub. Nina and Maxie enter and notice Peter sitting alone at a table. Nina asks him why he is still in town when there is nothing for him. He reveals that he now owns the Invader and plans to rebuild its reputation as a trusted paper. He invites Maxie to be a part of his business.

Valentin asks Madeline if Nina had a daughter.

Peter approaches Lulu with an offer.

Sonny assures Carly that he got rid of the evidence.