Monday July 30, 2018: Julian tells Kim how much he wants to be a grandfather, something is wrong with Brad's baby, and Jason smuggles Carly out of Ferncliff. 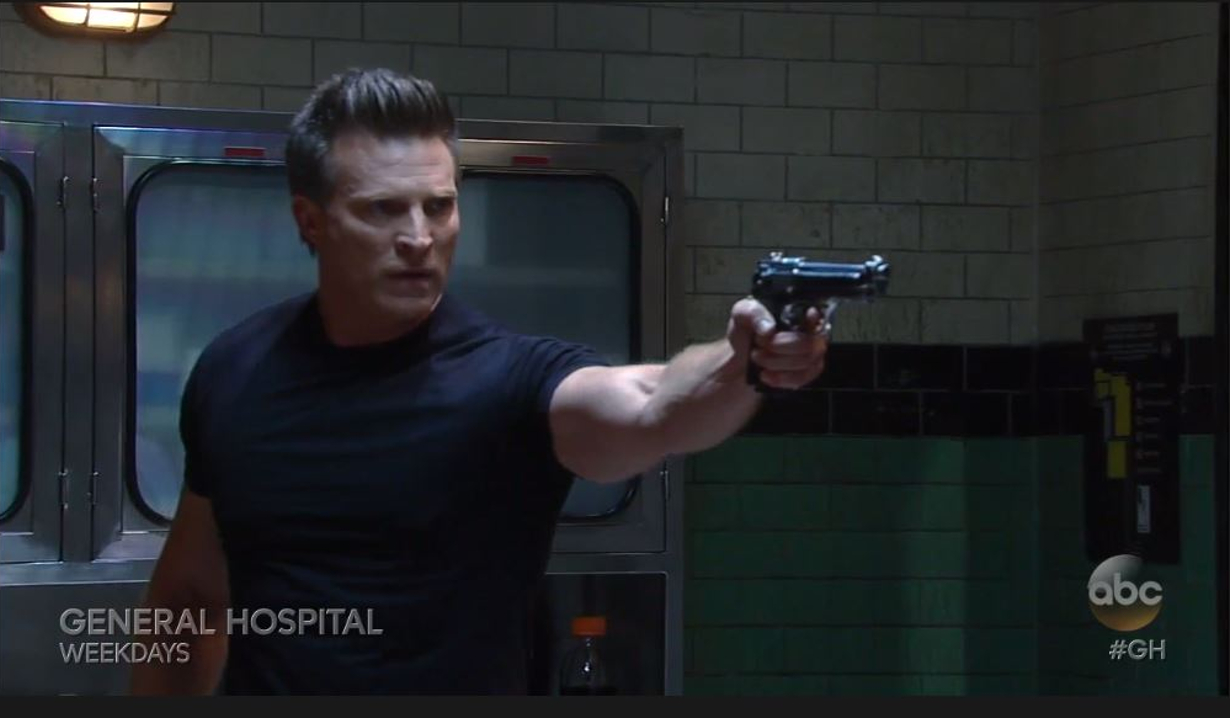 At Ferncliff, Dr. Lazarus and his nurse strap Carly in for some ECT when Jason barges in, gun drawn, and demands they shut it down. He gets them on the floor and ties them up before taking Carly’s hand. She can barely believe he’s real. It’s hard for her to stand but he gets her up. The doctor warns they will be seen but they head into the hallway anyway. Meanwhile, Franco sits in his vehicle outside, eager to drive away. He thinks about leaving but Jason took the keys. Jason and Carly arrive and he orders Franco into the backseat before taking off. They drop him off at the hospital and he wishes them well. At the hospital, Julian calls Brad and asks about the baby. Brad is eager to let Lucas know the baby is home. Down the hall, Kim chases down Liz and asks if she’s seen Nelle. She hasn’t. Liz is distracted since Franco’s phone is off. The doctor sits her down and tries to calm her fears. Julian joins them and tells them all about his new grandson. Liz bustles off and Kim tells Julian how wonderful Lucas will feel when he meets his son. One of the biggest regrets Julian has is not being there when his son was born. He worries he’s fooling himself by thinking he’ll be allowed to be a grandfather. Kim is encouraging. Jerome is determined to prove himself to his children. She’s sure his children will see how hard he’s working. Meanwhile, Franco steps off the elevator and bumps into Liz, who immediately grills him. He warns that the truth is ‘alarming’ but she still insists on hearing it. Franco gives her the details. She’s not happy to hear about him doing something illegal but says he did the right thing in this case. He wonders if she’s only reacting this way because Jason was involved. She’s proud of him for doing the decent thing.

At home, Brad keeps staring at the baby and telling himself he’s a parent. He admits he’s been nervous about this. After the baby sleeps for a while, Brad gets a bottle and tries to wake him. The baby is silent. Brad drops the bottle. Carly wakes up in Jason’s penthouse. She thought that everything that just happened was a hallucination. He assures her that this is real and she is safe. Carly cries and hugs him. He explains that Franco helped him get into Ferncliff. He’s sorry that he waited so long to break her out. She regrets that she ever pleaded insanity and insists that they trust their instincts from now on. Sobbing, she tells him how horrible it was. It was almost as awful as losing Morgan. In Jordan’s office, Sonny and Chase panic as they lose their trail on Michael and Nelle. Once the detective gets the last reading, Sonny runs out. Chase is about to follow when Jordan stops him and demands an explanation. The detective fills her in and shows her the footage. This impresses the commissioner. A cop comes in to say the vehicle transporting Obrecht has lost contact with them. In the crashed prison van on country route 23, Obrecht checks to make sure the cops transporting her are still alive but unconscious. She’s relieved there won’t be any additional murder charges and grabs a gun before leaping out. Down the road, Michael and Nelle have crashed their car. She wakes up and gets the baby to kick. When she tries to wake Michael, nothing happens. She’s grateful it’s over. That doesn’t last long since he comes to. He’s guesses she’s not happy about this and says her whole plan was a failure. She guesses she’s been set up. He confirms it and says the car has been rigged to record everything. They bicker about his mom until she storms out. He can’t get his seatbelt off. It’s jammed. Nelle spots a gas leak and he starts begging her not to leave him there. She abandons him to fate and wanders off. Sonny runs up and cuts him loose, but Michael’s leg is stuck. Back down the road, Jordan and Chase find the crashed van and see that Obrecht has escaped with a gun. The commissioner orders him to find Obrecht while she looks for Michael. Out in the woods, Nelle starts going into labor when Obrecht just happens to walk by. She’s not in the mood to help a ‘lying sneak’ but Nelle begs. She tells her about the crash. Liesl guesses it’s mostly a lie. Nelle reminds her of the Hippocratic oath and demands her help. Obrecht has never understood the point of morality and assumes that Nelle is a sociopath. Yet, she imagines her child might be good anyway, just like Nathan was. She orders Nelle to spread her legs and push.

Jordan rushes back to the station.

Things aren’t panning out for Michael.

Something is confusing for Lucas.

Michael and Nelle Face Danger After...

Nelle Gives Brad Her Son After His...