Thursday July 26, 2018: Chase and Nelle finalize their plan, Carly is stunned to see Franco at Ferncliff, Kevin returns, and Brad meets his son. 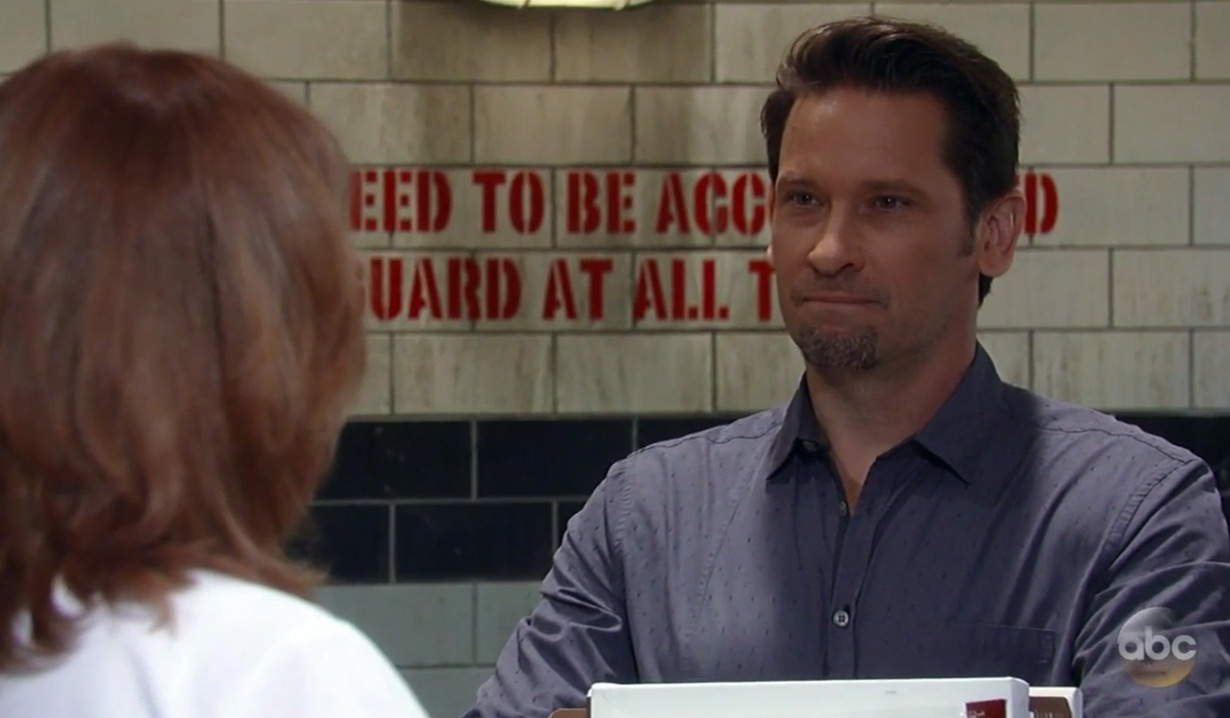 Julian runs into Alexis at GH and they chat about Kiki. Brad approaches and Alexis reveals the news that their baby was born last night and is on the way to the hospital. Lucas is in surgery and will miss the big reveal. Later the baby arrives. Elsewhere, Michael and Nelle finish another appointment with Kim and run into Ava. Michael has to leave when he gets a text from Chase to meet soon. Ava and Nelle trade barbs and Nelle reveals she won’t be returning to work, but reminds Ava to keep quiet about what really happened with Carly because she is an accomplice. Liz walks into Kevin’s office to drop off some files and finds Franco holding a pretend therapy session. She informs him Kevin is coming back today so he won’t have to pretend much longer. She reminds him he has that thing to go to, so he rushes off.

More: A daughter and sister return to Port Charles

At the PCPD, Jordan and Chase go over Michael and his plan. Chase explains Michael plans to get Nelle to confess what she did to Carly. Jason brings Kevin to the Corinthos place to see Sonny, who wants to know how they can bring Carly home. Kevin explains Carly breaking out makes things difficult, but he’ll see what he can do.

At Ferncliff, Mary Pat takes care of Carly, who is still in a drugged-out daze, but out of the padded cell and in the central patient room. Mary Pat tells her she has a big appointment today and needs to look her best for Dr. Lazarus. Mary Pat leaves her, and Carly begins to hallucinate that Nelle, who appears blurry to her, is there goading her on. Meanwhile, Mary brings in Franco, who is the new art therapist. Franco is surprised to see Carly, who begs Franco to warn Jason and Sonny about her situation and that they need to break her out. Mary Pat sees Franco with Carly and calls him away. She warns him to be careful of Carly. Franco admits he knows Carly, who doesn’t seem to be herself. Mary Pat says soon she will be right as rain. Later Mary Pat escorts Carly to see Dr. Lazarus. In the halls, she sees the fuzzy face of another person she seems to know walk by. It appears to be Kevin in a patient’s gown and he says, “SOS.”

More: Danger ahead for one couple Chase meets with Michael in the park to make sure he’s not having second thoughts about the plan, which Michael isn’t. Later he texts Nelle to meet him in the park and she arrives shortly after. Chase lets Nelle know that the brakes on Michael’s car have been tampered with and they will fail once he’s been driving for 15 miles. Nelle can’t believe it’s come to this, but she knows Michael has to die. Michael returns to the Quartermaine Mansion to find Ava waiting for him. She wants to talk to him about the accusations Carly made at the wedding that she was helping Nelle, which is ridiculous. Michael hints she may be dealing with Carly face to face soon enough. Nelle returns and wonders why Ava is there. Ava claims she was dropping off her final paycheck. After she leaves, Nelle asks Michael to pick up some glycerin pops she needs, but the only place that carries them is a pharmacy the town over. She also asks him to drop her off at GH first because she needs to see a lactation specialist.

Sonny goes to see Jordan at the PCPD to talk about Carly, but Jordan’s hands are tied. Chase arrives later and lets Sonny know the plan for Nelle is in progress.

Jason drops by the hospital to see Liz. They talk about his time with Jake, and she hopes one day he can get along with Franco like he’s been getting along with Drew. Jason spots Kevin and excuses himself to talk to the doctor. Kevin warns him that Kurt Lazarus has been put in charge of Carly and is known to use electroconvulsive therapy. He already has Carly scheduled for it and explains the treatment is usually used on those beyond all other help. Later Franco returns to see Liz, and Jason overhears him mentioning working at Ferncliff. Elsewhere, Julian takes photos of Brad and the baby and asks about the birth certificate. Alexis states that comes when the adoption is finalized after the thirty-day grace period the birth mother has to change her mind. Alexis suggests they focus on more pressing matters and asks if they have picked out a name. Brad says they settled on Whiley because they knew it would be a while before he was theirs, but it would be worth it. Brad allows Julian to hold his grandson before leaving to take him home.

Maxie asks Nina how she let Obrecht rope her into kidnapping Peter.

Robert gloats to Obrecht that she’s cuffed and ready for prison.

Peter asks Finn if he doesn’t have any dark skeletons in his family closet.

Jason questions Franco about his job at Ferncliff.

Michael and Nelle drive off in the car.

Michael and Chase Get Nelle Where...

Michael and Nelle Face Danger After...