Tuesday July 24, 2018: Nelle goes to Chase for help, Nina and Drew have questions for Peter, Valentin pleads with Nina, and Alexis turns to Ava for help. 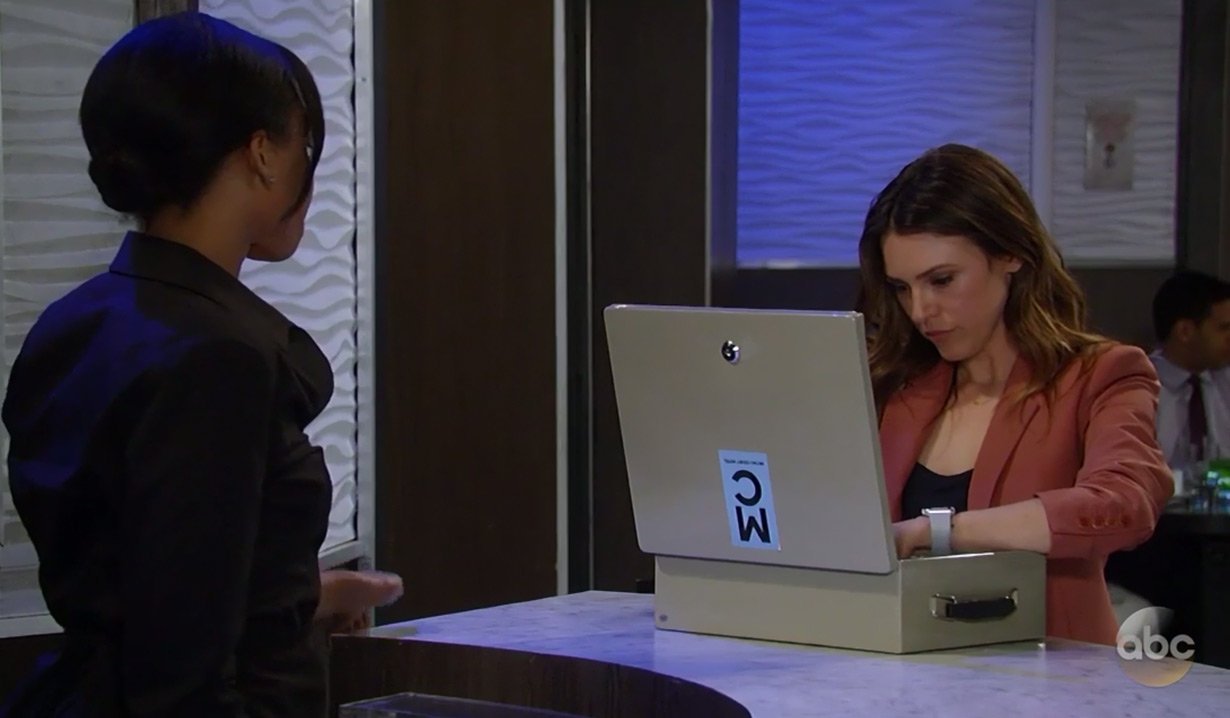 Drew runs into Margaux at the Metro Court bar, where they briefly discuss Peter August. Elsewhere, Griffin and Ava run into Julian who is staying at the hotel while Charlie’s is renovated.

They chitchat about Kiki’s case, and Julian mentions he has some ideas to run by her about it later. Griffin and Ava head to the restaurant for breakfast, but when she sees Nelle, Ava suggests they go elsewhere. He wonders if this has to do with Carly’s accusations at the wedding that someone was helping Nelle. She switches the subject to his own issues, the DNA test he ran on Peter, and warns him reporting what he did will help no one.

Griffin has to leave, so Ava tracks down Julian in his room and asks about his ideas. He realizes she has the wrong idea and won’t return to their old ways because he wants to be a better man for Kim. Ava is happy things are going well for them. In the restaurant, Nelle confronts Michael over breakfast about him treating her like an obligation he has to put up with. They fight, and she apologizes for snapping at him. She urges him to get back to work, so he leaves.

Nina checks on Peter at GH and asks why he didn’t turn her in. He knows she is kind and decent, unlike her aunt, and was grieving for her brother. Peter knows he’s alive because of her. Valentin walks in and reminds them of an old saying, “If you save someone’s life it belongs to you forever.” Peter urges Nina to move on with her life and not to give him another thought. Nina leaves, and Valentin thanks Peter for covering for Nina. Peter warns Valentin one day he’ll be a free man again and think of a way to pay him back for ruining his life by giving him to Faison.

Kiki stops by Alexis’ place to vent about a piece in The Intruder on Bensch that paints him in a glowing light and the subject of a witch hunt. Alexis calms her nerves down about the case, and after Kiki leaves, she calls Ava and asks her to come over. Ava arrives later and Alexis says she needs her help.

Jason speaks to Chase at Sonny’s gym about his and Michael’s plan, which he fears will put Michael in danger. Chase gets a text on his phone from Nelle asking to meet at the pier. Jason wants to be kept informed on what they discuss. Chase leaves and Michael arrives to speak to Jason about the plan and Nelle. Michael knows if there was any good in Nelle it is long gone.

Back at GH, Griffin runs into Nina. He orders her to go home, not to work, and to have someone look after her. Valentin approaches them and offers to care for Nina. Later the doctor checks on Peter, who apologizes to him for making him stay silent about the DNA test. Peter promises he won’t tell anyone that Griffin knew the truth. Margaux walks in to see if Peter is fit to stand trial, and to let him know he will be staying in jail this time.

Drew arrives, figuring Margaux may have come here. He has questions about the flash drive Peter claimed to have. Peter swears he put it in an envelope with his name on it, but then Obrecht knocked him out in his room. Margaux recalls discovering the envelope and decides to leave them because this sounds private. Drew doesn’t believe there is a flash drive and walks out. Later Kiki reports to work and vents to Griffin that she’s been an idiot, bringing up The Invader article, and how this is never going to go away.

Chase meets with Nelle at the pier. She cries that everything he warned her about Michael turned out to be true. She is terrified what Sonny might do to her to help Michael and that he already threatened to deal with her. Chase promises to help her, but she fears her only way out is to become a widow.

Valentin takes Nina back to her room at the Metro Court. She thanks him but reminds him their relationship is broken beyond repair. He doesn’t believe so because they both love one another. She still can’t get past him using a child, Peter, as a weapon for revenge. That move long ago put her brother’s death into motion, so she orders him to go and leave her alone. He abides by her request.

Margaux returns to the Metro Court asking if they have a lost and found, claiming she lost an earring. She’s shown the box and swipes the flash drive from it.

Nelle cries to Chase that the only way for her to be safe with her baby is for an accident to happen to take Michael out of the picture. She pulls Chase into a kiss.

Michael gets a text, “Got her.” He tells Sonny the trap is set.

Peter Survives and Tells the Cops...

Michael and Chase Get Nelle Where...