Peter Survives and Tells the Cops about His Ordeal

Monday July 23, 2018: Nina is questioned by the police, Kim and Julian clarify the status of their relationship, and Joss is turned down by Oscar. 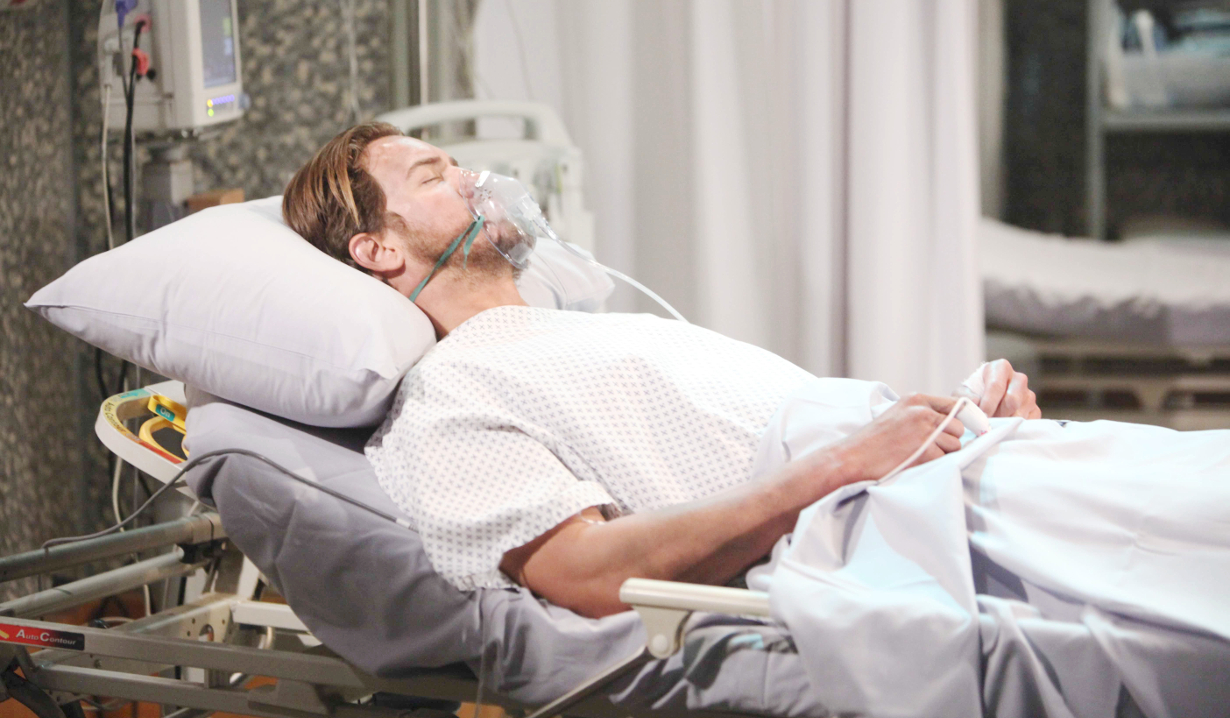 On Spoon island, Finn arrives at the stables as they go up in flames. He calls for Peter and finds him on the floor. The doctor drags him outside to Maxie, Nina, Lulu and Valentin. Peter flops in the grass. Maxie begs him not to die. She’s about to give him mouth to mouth when the medics arrive. Maxie asks them to save Peter. At the hospital, Lucas and Alexis discuss the adoption. She warns that it will go quickly and walks him through the steps. He’s still worried that he doesn’t have more of a guarantee that he and Brad will have the child for good. She reminds him that they signed on to the birth mother’s 30-day clause. Nina and Peter are rushed in on gurneys. Finn calls Anna and leaves a message about Peter. Meanwhile, Lucas examines Peter and orders some chest x-rays. He wants to check on Maxie and Lulu, but Maxie asks for a moment with Peter. He comes to when they are alone. She thinks it’s great he’s not dead. He heard her begging the paramedics not to let him die. Maxie insists she doesn’t care about him but there’s been enough death lately. He’s had a bad life but so have a lot of people. Peter gasps that he did some bad things. She suggests that he not waste his second chance at life. Down the hall, Nina is checked out and a doctor who decides to keep her in overnight just to be safe. Valentin tells her he’s grateful he had the chance to save her life. Spotting Alexis outside, he walks out to her and tells her Nina will need her help. They return to Nina’s side and give her their version of the Peter story, placing all the blame on Obrecht. Alexis says she has a conflict of interest since Peter may have aided the abduction of her grandchildren. She suggests they don’t say anything to the cops. Jordan enters. Valentin insists Nina needs time to recover. Jordan isn’t convinced Obrecht was acting alone and suggests Nina co-operate with her. Nina won’t talk without an attorney. The cop and lawyer leave. Alexis bumps into Finn and asks how Anna is reacting to the news. He hasn’t heard back from her. She explains that she’s had complicated issues with her children like Anna has and it takes time to work through them. Anna texts Finn back saying she’s relieved her son has been found. Back down the hall, Jordan and a cop cuff Peter to a bed. He assumes she’s keen to catch his ‘captors’. She guesses this means Liesl had an accomplice. Lucas returns and tells Jordan that she doesn’t have permission to speak to his patient. Spotting Nina and Valentin standing outside, Peter speaks up and says that it was all Obrecht and thanks god Nina found him. In a hotel room, Julian flubs asking Kim to let him stay with her. Awkwardly, she reminds him that he said he wanted to make the bar nice for them and their future. He asks if he was off base. This makes things more uncomfortable. Kim doesn’t want them to get ahead of themselves. He tries to reassure her. She admits that part of the attraction of their relationship has been how easy it is. Kim won’t make any promises. She’s still worried about Oscar. Julian knows the kid isn’t wild about him. She explains that she’s barely had a dating life and has always focused on her son and work. The doctor is afraid she might break Jerome’s heart. He suggests they stop looking ahead and enjoy the immediate. They kiss.

At the Corinthos compound, Joss and Oscar make out on the couch. She asks if he wants to take this upstairs. He’s worried but she’s insistent. He thinks this isn’t a good idea and she might regret their first time. When he tries to change the topic, she gets upset and accuses him of putting sex off like a horrible chore. He says she’s acting crazy. She accuses him of projecting and storms up the stairs. Eventually, she comes back, and he apologizes, repeating it’s not the right time. She says that there will never be an easy time in her life and suggests he get going. Margaux bumps into Drew at the Metro Court. She hands him a Port Charles cap to compensate for his dry cleaning bill. He shows her the invitation to his high school reunion. She doesn’t see the big deal until he explains that he has no memory of his life prior to 2014. They chat about living in hotels. After she goes up to her room and kicks off her shoes, she finds an envelope with Drew’s name on it by the couch and crumples it up.

Nina has questions about her good fortune.